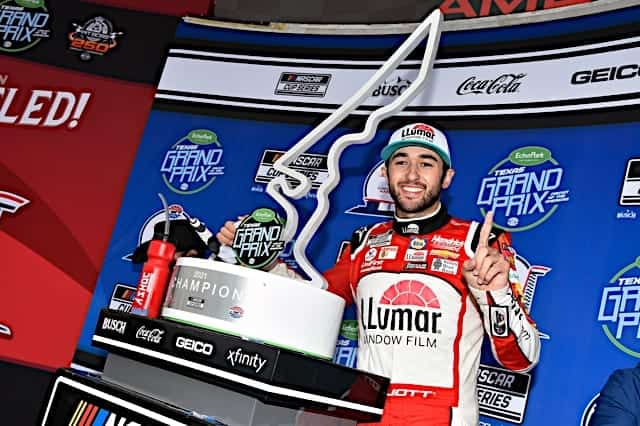 What better way to celebrate America’s birthday this weekend than to go to a track with America in its name? The NASCAR Cup Series goes to Road America to race for the first time in about 65 years. Let’s get your daily fantasy NASCAR DraftKings lineups prepped for Sunday’s (July 4) race!

The Cup Series first went out to the Wisconsin track in 1956 where Tim Flock won in a Mercury. Of course, no current drivers ran in that race but several have competed in NASCAR Xfinity Series races held there. That list includes Austin Cindric, Christopher Bell, Michael McDowell and AJ Allmendinger — all previous winners at this facility.

Practice and qualifying return this weekend, with practice starting at 12:35 p.m. ET Saturday and qualifying just before the race Sunday at 11:05 a.m. That’ll give you a feel for which drivers might stand out at a track where most have limited to no experience.

Road America is really long, just over four miles with a lengthy straightaway and some blind corners. Here’s the layout below with names of the turns and sections on the racetrack:

Since the track is so large, there won’t be as many laps run, which means less bonus DraftKings points for laps led and fastest laps. Still, the fastest drivers will likely lead the most laps and as long as they finish near the front, it wouldn’t hurt to have one or two in your lineup. However, you also need ones that will make up the most ground from start to finish, as these will have some of the higher DraftKings scores. For example, last week at Pocono Raceway Ryan Preece played the right fuel strategy and gained some positions near the end to earn an eighth-place finish. The 15 fantasy points added to his total score of 51 DraftKings points.

Speaking of Pocono, here’s how last week’s picks did:

There were some good and not-so-good DraftKings scores from this weekend, but overall, the picks were OK. Saturday’s lineup didn’t cash the tournament I was in ($1 Happy Hour) but it won in the $1 double up. I changed up some things for Sunday based on how the drivers performed Saturday and included Kyle Busch, William Byron, Alex Bowman and Ryan Newman. Sometimes, chasing position differential points helps you win your contests.

Now, on to Road America!

I’m going right back to the well with Elliott. I mean, he’s won five of the past seven road course events, including Circuit of the Americas in May. While the reigning NASCAR Cup champion wasn’t the favorite in that event, he did lead five laps and posted 12 fastest laps. Granted, it was in the rain, but it still counts as a win. Elliott also was neck-and-neck with Kyle Larson at Sonoma Raceway last month, leading 13 circuits before coming home second.

The No. 9 Hendrick Motorsports driver also won at Watkins Glen International in 2018-2019 as well as the last two events at the Charlotte Motor Speedway ROVAL. Additionally, he took home the victory in the inaugural event at Daytona International Speedway’s road course last year. Plus, in the last 10 road course races, he’s led a total of 293 laps. Elliott is a favorite at this track type and this week is no different.

Elliott also has two fourth-place finishes at Road America in the Xfinity Series, though it was back in 2014-15. Still, his road course prowess shows him as a strong contender on Sunday.

Wow, someone besides Larson won this past weekend! All joking aside, he was leading on the last lap last Saturday but cut a tire and hit the wall in Pocono’s final turn. Even with that in Saturday’s race and a pushed-in nose on Sunday, he still rallied to ninth and second in each race, respectively. There’s really no reason why you shouldn’t consider Larson this weekend at Road America.

After all, he led 57 laps en route to the win at Sonoma and was second at COTA to his Hendrick teammate Elliott. He also led 47 laps at the Charlotte ROVAL in 2018 but wound up 25th after a late crash. Larson has one start at Road America in NXS, a seventh after starting 13th in 2013.

Though he didn’t start off the 2021 season well at the Daytona road course, two top-two results in the last two road course races is more than enough to consider placing Larson in your DraftKings lineup.

After struggling at some road courses in 2018, Logano has earned four consecutive top fives and six top 10s since the Charlotte ROVAL in 2019. That streak includes a runner-up finish at Charlotte in 2020 and at the Daytona road course at the beginning of this year. He was also third at COTA and fourth at Sonoma, scoring 48.4 and 50.7 DraftKings points in each race, respectively.

The No. 22 Team Penske pilot has four straight top-10 finishes and six of the last seven events this season, producing some very good DraftKings scores considering. Last week at Pocono, he scored 43 fantasy points on Saturday after ending the race in seventh.

Although Logano’s never run in Xfinity at Road America, he should be able to use what he’s learned recently on the road courses to help him earn another good finish.

If you’d like, Allmendinger is also good on road courses and costs about this salary on DraftKings. The ‘Dinger has two top-10 finishes in two Cup starts this year and is in prime position to continue that run with Kaulig Racing’s developing Cup program.

One thing about Chastain is while he doesn’t usually qualify as well on road courses, he tends to gain several positions. Before joining Chip Ganassi Racing earlier this year, he competed for Premium Motorsports in the Cup Series and earned three finishes in the 20s, which is very respectable for an underfunded team.

In the past two road course races at COTA and Sonoma, Chastain ended in the top 10. He was fourth in Austin, Texas and seventh at Sonoma after starting 20th or further back. These helped boost his DraftKings scores to the upper 50s.

Chastain also has some experience at Road America in NXS, ending seventh in 2018 and 2020 for JD Motorsports and Kaulig Racing. Check to see where he qualifies on Sunday; if Chastain starts in the 20s, he should be a great value play on DraftKings.

I like McDowell as well if you’d rather opt for an all-around road-course ringer. He’s a previous winner at Road America in NXS.

Dillon may drive for Gaunt Brothers Racing on a limited schedule but he certainly makes the most of it on the track (at least for fantasy purposes). He gained 12 positions at COTA to 21st place, earning 33 DraftKings points. Then, at the Daytona road course, he scored 43 DraftKings points after a strong rally to 19th place.

Additionally, Dillon has a really good finish at a different road course. While driving for the now defunct Germain Racing team, he moved up 14 positions to end up 15th at the Charlotte ROVAL in 2019.

As far as Road America, Dillon drove for Richard Childress Racing in Xfinity from 2014-2016, earning a 10th-place finish in 2015. He’s mostly here as a value play to help you fit some higher-priced drivers in your DraftKings lineup.

LaJoie’s team, the No. 7 of Spire Motorsports, has had some finishes in the teens recently before a wreck at Pocono left him in 36th last Saturday. Still, he came back to end 23rd the following day, earning 32 fantasy points on DraftKings — his second 30-plus score in the last three events.

Also, at COTA LaJoie gained five spots to end 20th; he also earned an 18th at Sonoma after starting 22nd. These latest runs put him on my radar for this weekend as a sneaky inexpensive option. You really don’t need much from LaJoie, especially if he doesn’t qualify in the top 20 this weekend.