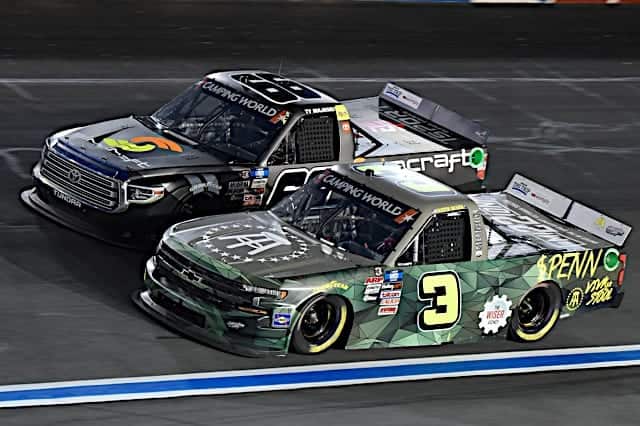 Jordan Anderson Racing will welcome a new driver behind its No. 3 Chevrolet in the upcoming NASCAR Camping World Truck Series race at Knoxville Raceway. Parker Price-Miller will attempt to make his Truck Series debut, the team announced Friday (July 2).

Sponsors for Price-Miller’s debut will be announced at a future date.

“Parker is a very talented driver behind the wheel of a sprint car, with the amount of competition at a [World of Outlaws] race it is an impressive feat in its own right to claim victory,” team owner Jordan Anderson said in a team statement. “His ability to quickly adapt will speed up the learning curve when getting behind the wheel of the truck for the first time. His experience and knowledge at the Knoxville Raceway will make him a great addition to the team.”

Price-Miller has captured 31 sprint car victories on dirt tracks, including one win at Knoxville in addition to qualifying for the Knoxville Nationals A-Main twice.

“As a sprint car driver, it’s so cool that I’m getting the opportunity to make my NASCAR Camping World Truck Series debut at a track that is the absolute mecca of Sprint Car racing,” Price-Miller said in the team release. “This year racing for Guy (Forbrook) we have been trying to run as many weekly races at Knoxville as possible in preparation for the famed Knoxville Nationals in August. I am hoping to apply some of the things I have learned over the years to have an edge over the NCWTS regulars and earn a solid finish for everyone in the sprint car community.”

Super excited for this opportunity next weekend! A lot of people and effort went into making this happen and couldn’t be more thankful. See everyone @knoxvilleraces next week! https://t.co/pPt3wQ2tcg

This year, the No. 3 entry is 31st in the owners’ championship standings. Anderson and Howie DiSavino III have both piloted the truck so far this year.

The first-ever Truck Series race at Knoxville is set to take place at 9 p.m. ET with TV coverage provided by FOX Sports 1.