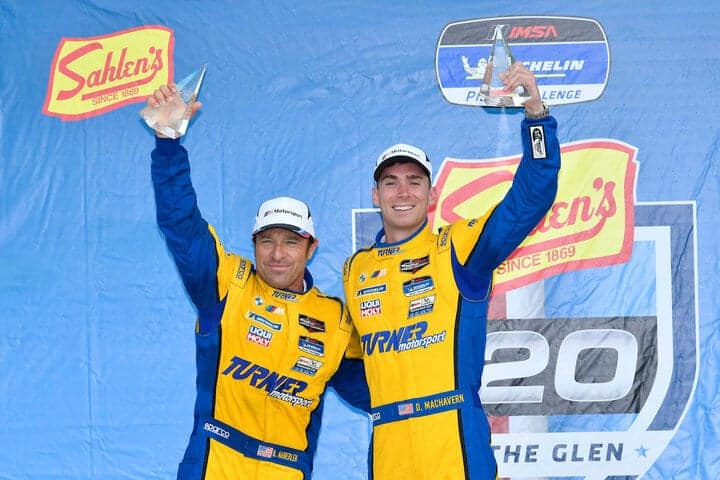 WATKINS GLEN, N.Y. – Turner Motorsport’s Bill Auberlen and Dillon Machavern dominated the Sahlen’s 120 at the Glen Friday (July 2).  Auberlen was able to hold off Wright Motorsports’ Jan Heylen on a late restart with three laps to go to take the victory, leading every lap along the way.

The race started under yellow due to Van der Steur Racing’s Rory van der Steur crashing on the downhill run to turn 7 in the Boot.  Van der Steur’s Hyundai Veloster N TCR was significantly damaged and was forced to retire from the event.  This is not considered a “Did Not Start” since van der Steur did leave the pits under his own power, but he is credited with a 35th-place finish with no laps complete.  Van der Steur’s crash resulted in the race running the first 18 minutes behind the pace car under caution as fluids were cleaned up in the Boot.

Once the green finally came out, Machavern led the field to green and opened up a small gap over Wright Motorsports’ Ryan Hardwick.  TeamTGM’s Hugh Plumb moved up to third, while Riley Motorsports’ Alfredo Najri was fourth.

Hugh Plumb was able to make quick work of Hardwick for second, but could not run down Machavern.  Despite the yellow start to the race, it was generally a clean affair.  This was despite everyone looking to the skies, thinking that it was going to rain at any minute.

The weather likely played a role in Archangel Motorsports’ pit strategy.  They chose to make their first pit stop 54 minutes into the race to swap out Alan Brynjolfsson for Trent Hindman.  Problem is, they couldn’t go 66 minutes on fuel.  Meanwhile, Machavern went well past halfway to the 66-minute mark before making his only pit stop to make way for Auberlen.

Once the pit stops were over, Auberlen had a three-second lead over Hindman.  Hindman is a quick driver and the Aston Martin is a quick car.  As a result, Hindman was able to close in to Auberlen’s back bumper.  However, Auberlen already knew about Hindman’s strategy.  Hindman couldn’t make it to the finish without help from a full course caution.

Sure enough, the yellow didn’t come early enough, forcing Hindman to pit for fuel with 18 minutes remaining just as rain started to fall.  That elevated Heylen to second.  Shortly afterwards, the caution that Hindman desperately needed flew when VGMC Racing’s Jon Miller spun his Honda Civic Type-R TCR in turn 10 and got stuck in the gravel.

Once Miller was extricated from the trap and the track cleared, there were under five minutes remaining to settle the race.  Heylen ran Auberlen hard, as he generally does, but the track was becoming wetter all the time.  On the final lap, Heylen was right up on Auberlen’s rear wing before he nearly spun out in the Carousel.  That was all Auberlen needed in order to take the win,

Auberlen and Machavern’s margin of victory was 0.615 seconds over Heylen and Hardwick.  TeamTGM’s Hugh and Matt Plumb were third in their Camaro, followed by HTP Winward Motorsport’s Indy Dontje and Russell Ward.  Robby Foley and Vin Barletta in the second Turner BMW finished fifth.

Motorsports in Action’s Sheena Monk and Spencer Pigot finished sixth in their McLaren, then Hindman and Alan Brynjolfsson after their late pit stop.  McCann Racing’s Andrew Davis and Michael McCann Jr. were eighth despite an early spin, while Riley Motorsports’ Najri and Pierre Kleinubing were ninth in the sole Toyota in the field.  PF Racing’s Chad McCumbee and James Pesek rounded out the top 10.

In TCR, IMSA mandated that the Honda Civic Type-R TCRs add 40 kilograms (88 pounds) after last weekend’s dominant performance by Atlanta Speedwerks.  Did it really change anything.  No, not really.

Bryan Herta Autosport’s Harry Gottsacker started from the pole and led early.  Atlanta Speedwerks’ Brian Henderson dropped behind Parker Chase after the race went green, but was able to get him back eventually.

Pit strategy normally doesn’t play that big of a role for the TCR cars in sprint races because the cars can go more than an hour on fuel, making them all one-stop races unless you deviate from that strategy.  This is what Gottsacker and Bryan Herta Autosport did.  Gottsacker pitted for tires and fuel 35 minutes in, too early to change drivers.

That move allowed Henderson to take the class lead.  Meanwhile, Atlanta Speedwerks kept up the typical pit strategy, pitting Henderson just after halfway for tires, fuel and a change to Robert Noaker.

Ultimately, the strategy really didn’t work out for BHA as the No. 33 Hyundai Elantra N TCR ended up way down the order.  Meanwhile, Noaker ended up in the lead after the stops with a decent advantage over Copeland Motorsports’ Tyler Maxson.

The caution set up a duel between Noaker, Maxson, Roadshagger Racing’s Jon Morley and Ryan Eversley in the second Atlanta Speedwerks Honda.  On the restart, Morley got an excellent start and swept past both Noaker and Maxson to take the class lead.  However, Noaker was able to get the lead back a lap later.  Eversley was able to follow past into second.

As a result, Morley and Gavin Ernstone inherited a second-place finish despite Morley’s final restart being considered questionable.  As of now, no penalty is reflected in the results, but that can change.  Bryan Herta Autosport’s Taylor Hagler and Michael Lewis came from the rear of the grid to finish third, followed by Copeland Motorsports’ No. 51 Hyundai for Mason Filippi and AJ Muss.  Michael Johnson and Stephen Simpson were fifth.

Michelin Pilot Challenge teams will take a week off before heading to Connecticut’s Lime Rock Park for the Lime Rock Park 120.  The action from Lime Rock will be streamed on July 17 at 11:05 a.m. on NBC Sports’ TrackPass.