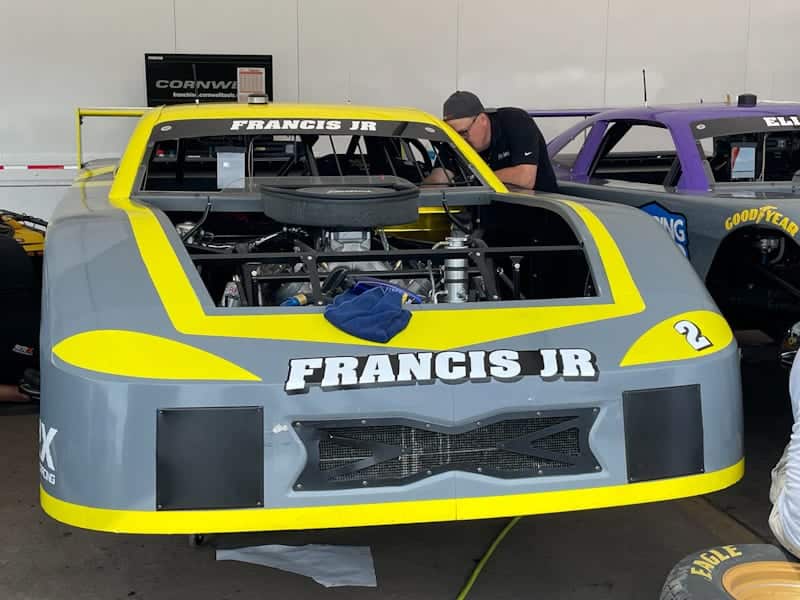 On the night before July 4, the Camping World SRX Series field put on fireworks of their own at Lucas Oil Raceway. After a calm first two heats, the intensity level ramped up, but Ernie Francis Jr. fended off all challengers to win Saturday night (July 3).

“Man, I’m totally speechless, this is incredible,” Francis Jr. told CBS in victory lane. “Those last 10-15 laps felt like an eternity out there. All the cautions – I was trying to focus on a good restart. Me and Scott Speed went there for a few laps side-by-side; I didn’t know how that was going to end up. Left with a few donuts on the car but I mean, couldn’t be happier with it. This is super incredible! This is unbelievable. It’ll make that drive to Road America tomorrow a lot better.”

“I was playing around with the gears to see what would work,” Francis continued to tell CBS about how he fended off his fellow drivers to win at the 0.686-mile short track in Brownsburg, Ind. “Second gear was spinning off turn 4 there so I tried to roll through third. That last restart I got real sideways but I stayed in it; I didn’t want to lift there and when I saw that I cleared Bobby Labonte, that was a good feeling. I knew I had to get through the last few turns clean and ran my race and took it home.”

Scott Speed convincingly won the first heat and raced for the lead late.

Tony Stewart, who won back-to-back features on the two dirt tracks, finished seventh. He acknowledged via the radio to CBS that he didn’t have a car capable of holding off the frontrunners.

Helio Castroneves won the second heat. During the last caution flag, he and Speed exchanged contact, and Castroneves spun him. Castroneves eventually finished ninth. The two drivers left unhappily with each other, too.

Slinger Speedway will be the site for the next SRX event. It will take place on Saturday, July 10 at 8 p.m. ET with TV coverage provided by CBS.

This series is so bad even reading the write up is boring.

Would rather watch PT and Willie T in a hot dog eating contest. SRX? How about AARP IROC.