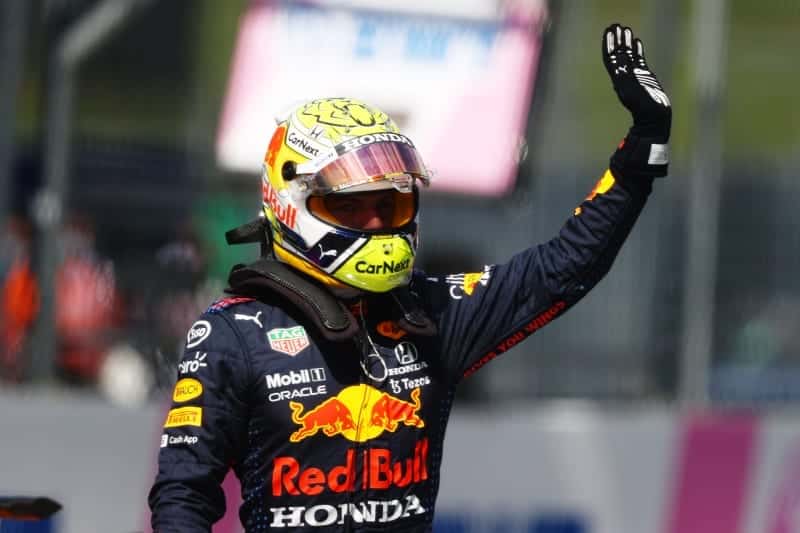 Max Verstappen continued his string of incredible Formula 1 performances with the pole position at the 2021 Austrian Grand Prix. This was his third pole in a row and his fourth of the year, and the Red Bull driver was the first to dip into the 1 minute, 3-second range, setting a pole position lap time of 1:03.720. Neither his teammate Sergio Perez nor his Mercedes rivals couldn’t match him.

In fact, the closest challenger was Lando Norris, who nearly snatched a surprise pole position for McLaren. Norris put in a purple first sector on his final flying lap, and finished just 0.048 of a second behind Verstappen to line up second on the grid. Perez was also able to get into the 1:03s but was two-tenths down on Verstappen and will start third. Next came the two Mercedes, who have looked off the pace around the Red Bull Ring, with Lewis Hamilton ahead Valtteri Bottas by less than half a tenth of a second. Sixth place went to Pierre Gasly, who will start ahead of his Alpha Tour teammate Yuki Tsunoda. Sebastian Vettel qualified eighth in the Aston Martin, but could receive a penalty for a Q2 misstep.

After the investigation Vettel was determined to have impeded Alonso and was penalized three places on the grid. He was also given a penalty point on his license, totaling sixth in the last 12 months. That moves George Russell, Lance Stroll and Carlos Sainz up a position on the grid.

Williams’ George Russell had an amazing qualifying, putting in a blistering lap on medium tires in Q2 to make it to the top-10 shootout and then beating Lance Stroll to eighth place. Stroll in the Aston Martin will start ninth, around half-a-tenth down on Vettel.

Q2 produced a few surprises. After their initial runs both Ferraris were in the elimination zone, but they decided to go back out on the slower medium tires for their final attempt, hoping to make the top 10 but with the preferred race strategy of starting on mediums. The gamble didn’t work, with Carlos Sainz qualifying 10th, just 0.006 seconds off Russell, and Charles Leclerc right behind in 12th. After the Ferrari duo was McLaren’s Daniel Ricciardo, who couldn’t seem to string together a good lap. Starting 14th is Alpine’s Fernando Alonso, who had put in a phenomenal lap in Q1 but was blocked by Vettel in the last corner on his final flying lap. The incident will be investigated later, but appears to be a definite grid penalty for Vettel. Alfa Romeo’s Antonio Giovinazzi will start in 15th after a good run to reach Q2.

In Q1, the short lap meant there was little to separate the midfield drivers, making for a tight field. Despite running well in practice, Kimi Raikkonen could only manage 16th in his Alfa Romeo, nine spots behind where his teammate finished in Q1. Esteban Ocon for Alpine was also adrift of his teammate, finishing the session in 17th. This is the second week in a row that Ocon has been eliminated from Q1, continuing a streak of poor performances after signing a contract extension with Alpine. Nicholas Latifi will start 18th for Williams, ahead of the two Haas cars of Mick Schumacher and Nikita Mazepin, starting 19th and 20th respectively.

Last week, in the middle of the Styrian Grand Prix weekend, F1 announced a major change for the Russian Grand Prix. Starting in 2023, the race will be held at Autodrom Igora Drive, a new purpose-built track 34 miles outside of St. Petersburg. This will mark the first time that the Russian Grand Prix is run anywhere besides the Sochi Autodrom, a street circuit constructed in the Olympic Park in Sochi which hosted the 2014 Winter Olympics.

The circuit features 10 different layouts, and although it is not yet clear which configuration F1 will use, there are a few reasons to be hopeful about the change of venue. First off, Sochi Autodrom is one of the dullest tracks on the calendar, consistently producing sleep-inducing races due to the flat landscape and anonymous 90 degree corners. The only real passing opportunity is on the main straight, but it is so long that DRS becomes too powerful and overtakes occur far before the braking zone. Who knows if Igora Drive will be better for F1 cars to battle at, but it can’t get much worse than Sochi so it’s good to see F1 mix things up and try a new venue.

Secondly, the track is only 93 miles from the border with Finland, making it the closest thing to a home race for Bottas and Raikkonen. That assumes that both drivers will still be in the sport in two years time, which certainly isn’t a guarantee given Raikkonen’s age and the pressure Bottas is facing as Russell eyes his Mercedes seat. Lastly, having the race close to a major population hub like St. Petersburg will bring increased exposure. Sochi isn’t a small city, with around 400,000 residents, but St. Petersburg is in a whole other league with a population close to 5 million. With one Russian driver already in the sport—Mazepin—and another close to making the leap from Formula 2 in Robert Shwartzman, moving the Russian Grand Prix to a bigger city is a great way to capitalize on the Russian talent in the sport and attract more fans.

As always, it is virtually impossible to say now how big an impact these signings will have on Aston Martin, but the moves demonstrate owner Lawrence Stroll’s commitment to F1 and his desire to have Aston Martin challenge for world championships. Last year, under the previous moniker of Racing Point, the team had one of the quickest cars in the midfield and finished fourth overall, but they have fallen back this season to sixth in the standings. These recent signings point to Aston Martin preparing for the all-new aerodynamic rules arriving in 2022, where they could make the most of the regulatory overhaul to move up to the front of the grid.

Certainly looks like for the first time in the hybrid era of F1 Merc isn’t the fastest car. A change that many of us have been waiting for.