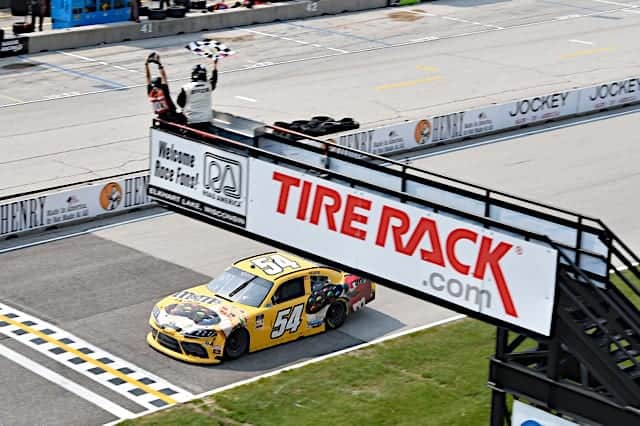 The NASCAR Xfinity Series took to Road America on Saturday (July 3), and it did not disappoint. Kyle Busch recovered from a couple off-track excursions and slight damage to win the Henry 180.

It was Busch’s third Xfinity win in the last four races and 101st of his career.

“Obviously tires, that was the saving grace for us,” Busch told NBC Sports after the race. “We had tires left over, the [No.] 16 didn’t. When we came and put them tires on I wasn’t sure we were going to get through that many cars. I don’t know what happened on the last couple of restarts, just a melee at the start going down the straightaway. I couldn’t really see what was happening. Then there was a wreck between [turns] 2 and 3, was just fortunate to be on the right side in order to get by that stuff and get through that stuff without too much damage to our racecar.”

The race had multiple overtakes throughout the field and afternoon, as well as some big crashes.

Ty Gibbs led the field in stage one at the drop of the green flag but fell to Allmendinger, who took the stage win. Busch went for a spin after contact with Justin Allgaier, which didn’t cause a caution, but the first yellow was when Spencer Pumpelly went off the track and got stuck in the gravel. Gibbs was penalized for an early lane switch on the restart, having to serve the penalty at the stage end. As a result, he received no stage points and had to restart at the rear following the stage break.

The No. 8 car of @sam_mayer_ takes a hard hit at @roadamerica and ends his day in Stage 2. ? pic.twitter.com/mLbrhxKN6d

After the wreck and being checked, he tweeted:

For those asking. Yes I am safe and sound.

Thanks to the safety of these cars and the people @JRMotorsports for making them safe. And to all of you who care ?

Allmendinger also took the stage 2 win, the first driver to sweep the stages on a road course in Xfinity this season. Unfortunately, during the next pit stop, the No. 16’s crew was too early over the wall and he had to start stage 3 at the back of the field.

Stage 3 also featured the hardest hit of the day, when Pumpelly lost his brakes and spun into the tire wall rear-first, climbing the barrier with his nose pointed down into the gravel. Rescue crews assisted him in getting out of the car, and he was OK.

The No. 6 of @SpencerPumpelly takes a MASSIVE hit after losing his brakes in Turn 1 at @roadamerica!

He was able to exit his vehicle under his own power. pic.twitter.com/ZWB8s8QDxg

The green flag waved with 16 laps to go with Brandon Brown in the lead, as he and several others stayed out and did not pit. Gibbs lost his transmission while running second and stalled on the track, ending his day.

Various pit strategies played out and Gragson took over the lead after staying out while others ahead of him pitted. However, on the restart, several cars received damage and wrecked, including Allgaier and Cindric, leaving the field with six laps left to race.

Rare to see wrecks like this on a road course, but multiple contenders are collected in this lap 38 crash including @austincindric and @KyleBusch! ? pic.twitter.com/D3N8RE1hKu

Gragson was overtaken by drivers with fresher tires, including Kyle Busch, who held on for the victory.

The NXS take on Atlanta Motor Speedway on July 10 at 3:30 p.m. ET. The race will air on NBC Sports Network.

How many minutes of cautions today ! How many commercial minutes !! How many times will I nod off during those minutes !!

Busch held on? He was driving away at the end.
You frontstretch hacks are just haters.