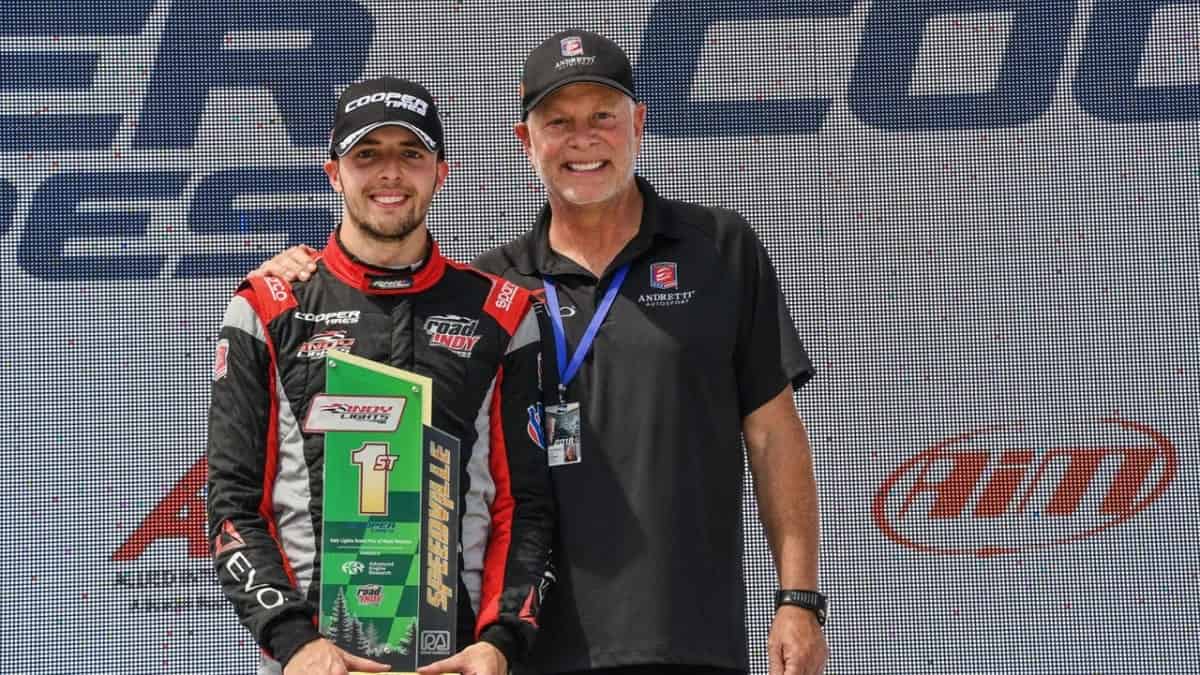 Ryan Norman will be making his NTT IndyCar Series debut in Sunday’s Honda Indy 200 at Mid-Ohio. Not only is it the moment he’s waited his whole career for, but he and his father John are using their accomplishment to hopefully open doors for other athletes across all of sports.

Ryan’s Dale Coyne Racing entry will carry sponsorship from EVO, his father John Norman’s company that enables fans to invest in the future of athletes. EVO investors can help the athlete find the funding that IndyCar fans know can make or break a driver’s opportunities, and in return the investors get a percentage of that athlete’s future winnings. The company counts Indy 500 winner Alexander Rossi as a member of its advisory board, and it can make a massive difference in helping talented people get to that top level of competition. While Ryan is not an EVO driver, he’s helping to get the word out.

Frontstretch spoke to both Ryan Norman and John Norman about what it means to their family for Ryan to make it onto the IndyCar grid, how the Road to Indy ladder played a huge role in his development, and how they’re utilizing the moment not only for themselves but to raise awareness of EVO and what it can do for other up-and-coming drivers.

Frontstretch (Brittany Frederick): Ryan, you’ve worked toward IndyCar your whole career, so what does it feel like to finally achieve your goal of competing in an NTT IndyCar Series race?

Ryan Norman: I’ve been preparing for this for years. I’m just ready to go…On pit lane, right before the cars start up, that whole thing with the National Anthem, the pace laps are going to be great. I’m going to take the whole entire weekend and just enjoy every single second.

Frontstretch: How do you prepare for joining the series in the middle of the 2021 season? You’re jumping into possibly the most competitive year the series has seen in awhile.

Ryan Norman: Luckily I was able to run last week in testing at Mid-Ohio. I was testing with Romain Grosjean; obviously he’s super-fast, tons of experience. I was able to talk with him and he’s definitely helped me along the way . I’ve been to Mid-Ohio so many times, which definitely helps. I think that’s why this was the perfect opportunity. This is probably the best track to make my debut at. And at the end of the day, it’s just another race car. I’m going to put everything aside and go out there and drive the car.

Frontstretch: You’re another driver who’s come through the Road to Indy system. How crucial was that development ladder in making you the driver you are today?

Ryan Norman: The fields were so stacked. You’ve got guys like Pato O’Ward, Colton Herta, Oliver Askew, Rinus VeeKay…all those guys that I raced against, it was just a stacked field. I learned so much from those guys, especially being teammates with Colton and Pato [at Andretti Autosport]. It was great racing against those guys, and obviously they’re showing well in IndyCar right now. I’m excited to get my shot.

Frontstretch: With names like the Hertas and the Andrettis, IndyCar has that strong family element. John, what does it mean for you to add the Normans to that list and share this achievement with Ryan this weekend?

John Norman: It’s absolutely incredible to be able to share that with him. [I was] just reminscing of when he was 16 years old and I said hey, let’s go to Skip Barber and do racing school together. It started that day and watching it develop over the years, watching his growth has been pretty incredible. And like Ryan said, he’s had a great group of drivers around him at all times.

Frontstretch: EVO has a strong connection to IndyCar because Alexander Rossi is part of the company’s advisory board. How did that relationship form, and how important is it for you to have an IndyCar driver on the board?

John Norman: When I was putting the team for EVO, one of the important aspects of it was we had to immediately show that we have credibility. That we have the right people around us. That we were going to be able to choose drivers that were great competition. I went to Michael Andretti initially and got him on board and Andretti on board as advisors, and then I approached Peter Rossi and Alexander.

They are both very, very mindful of what it takes for these young drivers to come on board and find the funding to make it to the top level. They showed immediate support and it’s great to have them on board as advisors as well. We get together on Zoom every couple of months and talk about the up and coming drivers that are out there so that when it comes time for EVO to pick a driver, we already have the inroads on which driver we think will have the best chance of success.

Frontstretch: Crowdfunding is not a new concept; we’ve seen it across entertainment with companies like Kickstarter and Legion M. What motivated you to bring it into the sports world?

John Norman: We identified that there is this [funding] issue not only in racing, but also in other sports like golf and combat sports. Now there is a way for the ordinary sports fan to, for very little money, get involved with EVO and be part of helping all these athletes that are really sacrificing and trying to put it all on the table…We need to amass tens of thousands of fans to have a big impact and we have the opportunity. Hopefully this weekend will also create awareness for more people to take a look and see what we’re doing.

Frontstretch: What is ultimately going to make you feel like Mid-Ohio was a successful debut? Is it solely a race win or what goals have you set for this first race?

Ryan Norman: Leaving the weekend knowing that I gave everything I possibly have and that I didn’t leave a single thing on the table. Even if you do everything correct, things happen in racing—other drivers, how the yellows play out and things like that. I really feel confident going into this weekend. I feel more prepared than I’ve ever been. I really feel like we have a good shot at this if we’re in the right position.

For more on Ryan Norman, follow him on Instagram; for more information on EVO or to become an EVO investor, visit evoinvest.com. The Honda Indy 200 at Mid-Ohio takes place Sunday, July 4 at 12:00 p.m. ET and airs on NBC.