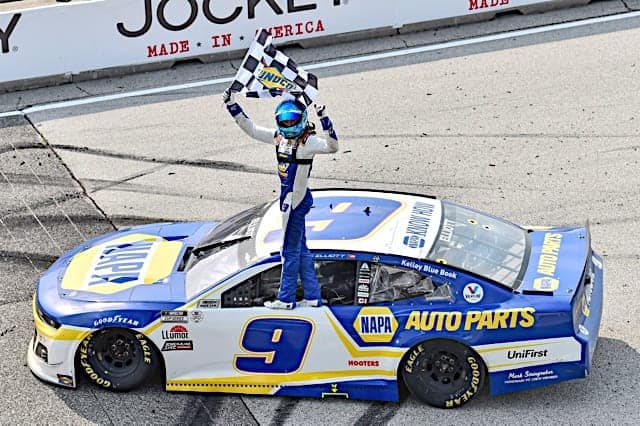 Chase Elliott drove from the back of the field to the front at Road America, outlasting Kyle Busch and winning the Jockey Made in America 250 in the NASCAR Cup Series’ return to Elkhart Lake, Wis. on Sunday, July 4.

Elliott’s second victory of 2021 was also his second at a road course, after his rain-shortened triumph at Circuit of the Americas. He started 32nd on Sunday as Cup took to the 4.048-mile, 14-turn track for the first time since 1956.

“It was a hot day,” Elliott said after celebrating with fans in turn 5, “but a lot of fun. Just really proud of our team for overcoming some adversity early and having to start at the back, having good pit stops. Had a really fast NAPA Chevrolet. Just so proud, we’ve had a rough two weeks, so it feels really good.

“…I never felt like I got in a real good rhythm all of yesterday,” he said of preparing for the race in practice on Saturday (July 3). “For whatever reason there, about halfway through the race, I started finding some of that rhythm and was able to put it together and piece different parts of the track. Then, finally, I felt like I was able to piece most of it together, so staying with it and glad it worked out.”

William Byron and Kyle Larson completed a Hendrick Motorsports sweep of the front row in qualifying and led the field to green, with Byron escaping from the No. 5 to lead the opening laps.

Issues started early, though, with Daniel Suarez suffering transmission issues and rolling to a stop on lap 3. It was the same problem that plagued the No. 99 at Circuit of the Americas, an incident that also happened in the first 10 laps of that race.

An early problem for @Daniel_SuarezG.

This brought out the first caution of the day with Byron still out front, but he and Larson waged a back-and-forth battle after the restart. That war ended, though, when Larson blew the corner in turn 5, came in too hot and swung wide, falling back to third and allowing AJ Allmendinger into second. Ty Dillon spun around prior to the end of the stage, as well, but it was Kyle Tilley flying off the racing surface and getting stuck in the gravel that brought out another caution.

That yellow brought an end to stage 1, won by Byron, and set up a chaotic restart headed up by Martin Truex Jr. and Matt DiBenedetto… and, going into the first turn, Austin Cindric. Cindric restarted third but dove to Truex’s inside, making it three-wide and dropping the No. 19 to third. DiBenedetto fell behind Cindric but bounced back, taking the lead from the No. 33.

Cindric then got the lead back five laps later, but overshot turn 7 to allow both DiBenedetto and Kyle Busch by him. Cindric initially appeared to recover, but was slow on track and then looped the car around with an apparent gear issue, taking it to the garage.

Something is amiss on Austin Cindric's car.

He was leading, but then looped it here. #NASCAR // #NBCRacingWeekend pic.twitter.com/4W8LmHAYPw

Busch and Truex inherited the top spots after the No. 21 pitted, but they also made stops prior to the end of stage 2, allowing Tyler Reddick to scoot through and claim the stage victory. Kurt Busch held on for fifth in the segment despite doing some landscaping and losing a spot.

Hamlin and Corey LaJoie became part of the off-track excursion club before the end of the stage.

Denny Hamlin takes a trip to the beach on the Fourth of July.#NASCAR // #NBCRacingWeekend pic.twitter.com/odXUhuTBpb

The No. 18 was the successor to the lead for the restart after those that didn’t pit originally stopped for service, but DiBenedetto then chased him down and got the lead back, gapping the Toyota by about a second.

That’s when Elliott started to make his presence known, passing Busch and eventually DiBenedetto for the lead. Busch followed suit past the No. 21 into second, and so did Denny Hamlin into third, dropping DiBenedetto to fourth with just over 20 laps left. Elliott and Busch both started at the back of the field when the race started and the No. 9 sat four seconds ahead of Busch, at least until a caution flew for Anthony Alfredo sliding into the gravel trap.

Nearly everyone pitted during the break and Busch retook the lead on the restart, but Elliott swept back by the No. 18.

Still a long way to go at @RoadAmerica!

Christopher Bell, a past Xfinity Series winner, moved up to third, but he still sat two seconds behind Busch. Busch, in turn, was nearly five seconds behind Elliott with 10 laps remaining. Busch cut it by about half a second with seven to go, while battles were being fought all throughout the top 10.

Things calmed down somewhat, but Larson’s top-five run went out the window when teammate Alex Bowman sailed into turn 5, punting the No. 5 into a spin.

His teammate Alex Bowman gets into the back of him and turns him around! TV: NBC // #NASCAR // #NBCRacingWeekend pic.twitter.com/sLj76tSkzk

Up front, Bell snuck past teammate Busch for the runner-up spot. The Daytona International Speedway road course winner pulled away but still ran more than five seconds behind Elliott, who cruised to his second victory of the season.

The Cup Series returns to Atlanta Motor Speedway, where Ryan Blaney won in March, next weekend. Catch the Quaker State 400 presented by Walmart on Sunday, July 11 at 3:30 p.m. ET with coverage on NBC Sports Network.

well big boss king jordon your boy Wallace failed his first test of what you wanted,top 10’s from here on, hell he could’nt even get a top 20, and don’t you wallace lovers say he started in the back well so did Kyle Busch and the winner chase the man Elliott. Wallace is a fake. He needed to be on the kiddie go-kart track inside the one they just raced on. 23×1 needs a new good driver!!!

Give it a break. You’ve made your point. You are completely biased against Wallace, and I suspect anyone that doesn’t look like you.
Thats your business.

No comment on the latest hero, Larson, running so wide that Bowman went for the pass, before Larson cut back down and got spun out. Or the myriad of missed apex’s and generally less than stellar performances in at least the back half of the field. Oh well. Maybe you will notice them next time.

First off Edwards you don’t know what I look like but I know one thing Wallace has a big mouth and he talks a lot of shit but he can’t back it up. As for the team mates Larson and bowman bowman said he didn’t have much if any brakes left going into that turn. Larson was just making his normal left turn and they got together that’s racing. I stand by every thing I said about the new jaws. He makes ol’ D.W. Look good. But D.W. Could back his mouth up with 84 wins.

Exactly right. And to be honest it doesnt matter, to me or anyone else. However the incessant banging on about Wallace is a bit tiresome. There are plenty of other drivers out there who arent there because of their superior ability or their earning it through their performances in the lower ranks.

I enjoyed the show until it’s ignominious end with Elliott being pushed at a crawl with flat tires. It is beyond me why some fans and drivers enjoy the “burn them down” moments. Post race clouds of smoking tires and screaming engines just doesn’t do anything for me. Also I think the networks should show every car at one time or other racing thus giving the poorer sponsors a small reward for their badly needed support.

Let’s be for real. King jordon as much as own’s Wallace with his billion and a half dollars. We all know the real reason he put Wallace in the seat and it was’nt because he’s a winner, just ask richard petty. Yes other drivers have been brought up from a different series and a lot go back cause they can’ t win. King jordon needs to do some searching soon for real talent.