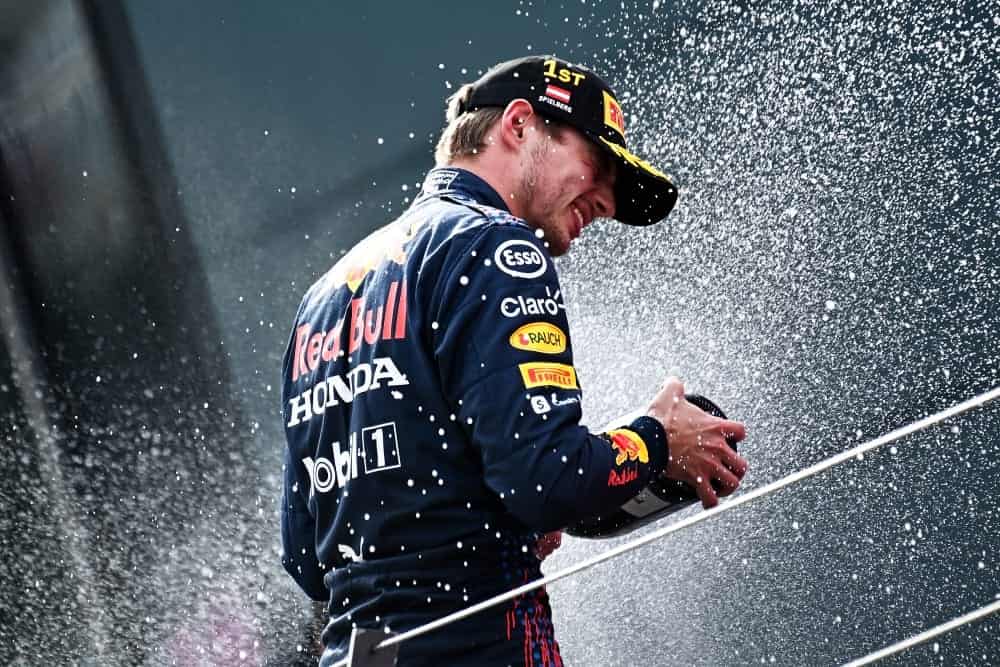 Max Verstappen breezed to his fifth win of 2021 at the Austrian Grand Prix on Sunday (July 4).  After securing the pole on Saturday, the race was Verstappen’s to lose and once he eked ahead of Lando Norris once the lights went out, Verstappen was on his way to the win.

By claiming his 15th career win, Verstappen opened up the gap in the Driver’s championship, creating a 182 – 150 edge over Lewis Hamilton who suffered from mechanical concern and finished fourth.

Pierre Gasly took ninth, a rebound from his DNF last week, and Fernando Alonso ended up in tenth, earning points for the fourth-straight race.

Red Bull maintained its lead in the Constructor’s table and now holds a 286 – 242 lead over Mercedes.  The closer battle rests with McLaren sitting 19 points ahead of Ferrari at 141 – 122.

Let’s just say that the stewards were busy.

Esteban Ocon became the unfortunate beneficiary of the mess, becoming the filling in an Oreo and then being squeezed out by Antonio Giovinazzi.  Ocon, who has found nothing to celebrate after signing a three-year extension with Alpine, will be relieved to be heading elsewhere after a third frustrating result.

One of the more curious moments of the race came when Norris and Perez raced side-by-side on lap four.  In what looked like two drivers trading moves, Norris appeared to gain the upper hand and by holding position edged Perez off the racing line.

The stewards disagreed, stating that Norris forced Perez off, and giving Norris a five-second penalty.  That punishment ultimately caused Norris to drop from second to third and created a stir in its application of the rule.

If Norris – Perez was not enough, Perez got into it again with Leclerc.  In what looked to be a replay, Perez eased Leclerc off the track in maintaining his position and earned a penalty.  The two were not done as Perez again held his position and saw Leclerc drive off the track – or be pushed, depending on the perspective.

On the track, Hamilton incurred damage in the second half of the race and while he was able to post solid times, eventually fell prey to Bottas.  The win was never in question for Verstappen but settling the points positions provided the drama.

If last weekend Verstappen whupped the field, this weekend he flat out demolished it.  He bested second-place by over 17 seconds, even after pulling out to a 27s gap and then pitting for tyres.  He also picked up the extra point for fastest lap.  Call it an easy win that came as soon as he held P1 after the first turn.

Verstappen is coming into his own.  The car suits him.  He has matured as a driver.  He is making things look easy just as previous masters have.  The Austrian GP is the kind of result that a championship driver is supposed to unleash while making it look casual in a car that is matched perfect.  There would be little surprise is seeing Verstappen push on in this fashion on his way to his first championship.

A dramatic end to the race, as former team mates collide#AustrianGP ?? #F1 pic.twitter.com/mS8rG9mKWo

Raikkonen was trailing George Russell and unable to make the pass on the final lap.  Sebastian Vettel crept up on fresher tyres and was ready to pass Raikkonen.  Going to the inside, Vettel looked to be on his way to claim the position when Raikkonen seemingly turned into Vettel, sending them both off the track and to disappointing finished.

This accident appears to be one of frustration rather than Raikkonen making any kind of discernably intelligent move.  The 20-second penalty was not enough for Vettel falling from 12th to 17th in the results or the damage he caused.  There’s a reason why this year is likely Raikkonen’s last in the sport.

In a decision that set the tone for the day, the stewards handed Lando Norris a five-second penalty for an incident with Sergio Perez that looked like nothing more than a racing incident.

Do you think Norris deserved a 5 second penalty for forcing Perez off-track?! ? pic.twitter.com/uizYlf2Sz2

The consensus from the Sky Sports broadcasters and social media reaction is that the stewards were a little harsh on the British driver.  Even the F1 Twitter feed described the incident as Perez going wide rather than Norris forcing him off the track.

We're back to racing! Verstappen leads the way

Norris and Perez fight for P2, but the Red Bull goes wide and drops to P10 through the gravel!#AustrianGP ?? #F1 pic.twitter.com/pN65OtXsLw

The early decision to penalize Norris not only cost Norris second but also established the tone for Perez gaining two timed penalties for racing Charles Leclerc as hard as he did.  Perez, in fighting for fifth, showed more aggression against Leclerc culminating in Leclerc being run off the track twice and Perez earning two separate five-second penalties.

Drivers have claimed they would like to be permitted to race each other harder but the stewards have announced they are not in favor of rough racing.  The question that will linger is whether such a mindset from race control will continue at Silverstone in two weeks.

Norris may have won the Driver of the Day award but Valtteri Bottas deserves a fair acknowledgment for finishing second.  Ricciardo should be commended for his drive from 13th to seventh but Ricciardo has still yet to post a stellar or shocking result.

Bottas, driving for Mercedes, has already endured two DNFs and he and the team have struggled to connect.  The last two races, however, have provided a stabilizing influence.

What is promising about the Austrian GP is that Bottas made his way from fifth to second.  Gaining three spots does not look like a statistical windfall but it is exactly the kind of result that Mercedes needs if it hopes to remain in the Constructor’s title fight.  Holding off Norris for second should count as a relative win and Bottas now has finished fourth, third, and second.  His average finish is just behind that of his teammate during that span.

– Verstappen in the postrace interview said, “Today was incredible to be honest, the car was on rails! It was really enjoyable to drive. You go into the weekend as the favorite, but it’s never easy to do. It was insane to see all the fans and so much orange!”

– Lando, “It was a good race – it was exciting but I’m disappointed because we should’ve been P2, I thought Lap 1 was just racing!”

– Bottas, recognizing the challenge he faced said, “It’s nice to be on the podium again in second place. McLaren were really quick today, they were putting on the pressure”

– Verstappen scored an additional point for setting the fastest lap of the race.

– Perez received a 10-second time penalty for forcing another driver off track.

– Stroll received a 5-second time penalty for speeding in the pit lane.

– Tsunoda received a 5-second time penalty for crossing the white line at the pit entry.

– Raikkonen received a drive-through penalty, converted to a 20-second time penalty, for causing a collision.