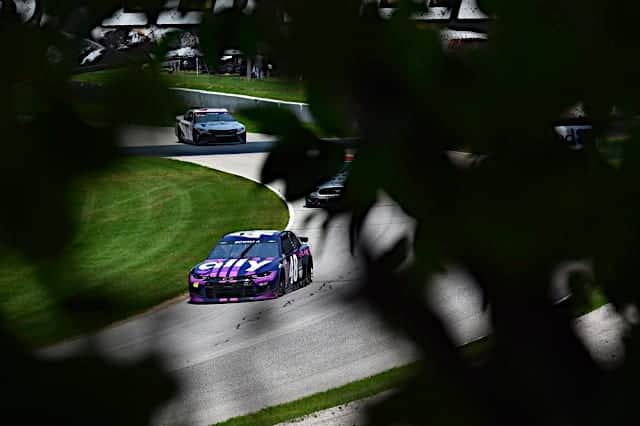 It has been 65 years since the NASCAR Cup Series took to Elkhart Lake, Wisconsin.

Sunday (July 4) will break that drought, as the sport’s premier division races amongst the green grass and dense surrounding trees at Road America on Independence Day.

Located midway between Milwaukee and Green Bay, the 4.048-mile, 14-turn layout of Road America is longer than any other track, be it oval or road course, on the Cup tour by nearly half a mile. The only other time the Cup Series raced there was in 1956, when Tim Flock won in a ’56 Mercury by 17 seconds over Billy Myers.

Just four previous Road America winners will start in Sunday’s Cup Series race, all of whom have Xfinity Series victories there: AJ Allmendinger (2013), Michael McDowell (2016), Christopher Bell (2019) and Kyle Busch (2021). Busch rebounded from a pair of off-roading moments and damage to his No. 54 Toyota on Saturday (July 3) to take the Henry 180 for his 101st Xfinity triumph.

Busch, Haley, Bilicki, Ryan Preece, Bubba Wallace and Kyle Tilley will start at the back for various reasons: everything from backups to transmission changes to unapproved adjustments. Busch had issues during practice on Saturday, while Wallace went off-road in qualifying. A number of drivers also chose to venture out late in the qualifying session and, as such did not make a lap. This group included Chase Elliott, Chase Briscoe and Austin Dillon, all of whom will roll off 34th or lower.

That Xfinity event might be a sign of things to come, too: a moderately chaotic race, with plenty of off-road excursions, spins and restart incidents. Spencer Pumpelly‘s No. 6 JD Motorsports Chevrolet even ended up backing into and climbing a tire barrier thanks to a brake failure, something seen few times since Tony Stewart did the same off Brian Vickers’s bumper at Sonoma Raceway in 2011.

A brake failure led to this vicious hit into the tire barrier by Spencer Pumpelly.

Elsewhere, the NTT IndyCar Series and Formula 1 were also in action: Indy took to the twists and turns of Mid-Ohio Sports Car Course, with Josef Newgarden scoring his first victory of 2021, while Max Verstappen flat-out dominated F1’s Austrian Grand Prix at the Red Bull Ring.

After all that, watch the Cup Series make their return to Elkhart Lake on NBC at 2:30 p.m. ET.

It’s great to see the most popular driver win the first race in 65years past and not the entitled one. Guess who?