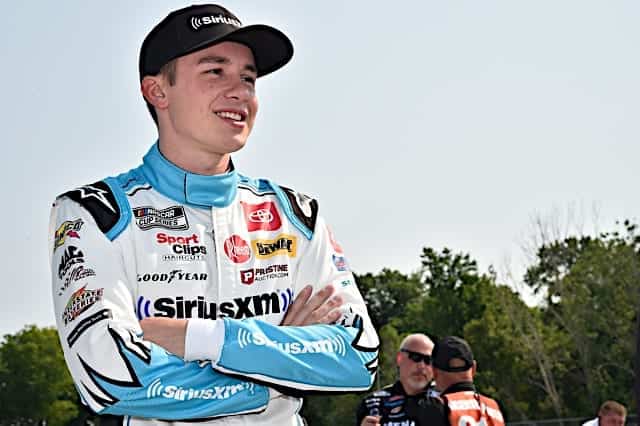 He might have started 34th, but Chase Elliott was in front when it counted, taking the checkered flag for the second time in 2021. The win moves Elliott to third all-time in road-course wins (of course, there are more road courses on the schedule now) and gives him a bump in playoff standings as well.

Elliott was inside the top 15 by the end of stage one, and by the time stage three rolled around, he made it clear that he was the driver to beat. Even when he lost the lead before what would be the final restart, it didn’t take him long to regain command. From there he left no doubt about who had the best car, winning by over five seconds

He came into the NASCAR Cup Series as a short-track ace but he’s turned heads on road courses the past couple of years, winning at the Daytona International Speedway road course. This week, Christopher Bell had another solid day on the right-handers after a struggle at Circuit of the Americas last month. He was in the mix all day this time around and worked his way up to battle his teammate Kyle Busch for the runner-up spot, taking it easily before setting sail on Elliott. There was no catching the No. 9, but Bell’s run was impressive nonetheless.

Inconsistency has plagued Bell this year and keeps him from being a title favorite, though he’s in the hunt thanks to his victory. This week doesn’t really change anything, but it could provide some positive momentum for the No. 20 group. And a strong summer would certainly put them in a better spot come playoff time.

Will Kyle Busch keep his word?

After Busch won his 101st Xfinity Series race on Saturday, it was a question on fans’ minds. After all, Busch said that once he hit 100 wins in that series, he’d hang up that particular helmet. Yet there he was, racing for another trophy on Saturday.

Busch can only run one more NXS race this year because of the current rules limiting Cup drivers to five undercards a season. And it’s likely he will run it. That doesn’t mean he’s going back on his word … for now.

If Busch’s sponsors signed on for five races in 2021, they’re probably going to get them. That’s just honoring a commitment. Whether Busch honors his own commitment going forward will be the question. If he runs Xfinity in 2022, then his detractors can, rightfully, call him on it.

Polesitter William Byron started the day strong, leading laps and winning stage one, but from there, his car was a world-beater. Byron hung inside the top 10 for most of stage two but faded in the late laps, and an off-track foray in the final stage ended his bid for a top finish. Byron had to settle for 33rd, tying his second-worst finish of 2021.

Point leader Denny Hamlin went for quite a ride during stage two when he went off course with eight laps remaining. Hamlin slid through a sand trap and drove through the grass before getting back on track in 15th. Hamlin suffered minimal damage but lost track position and picked up a lot of debris in his brake ducts. He was able to run out the stage, and that put him in a good position for the final run. After running in the top three early in the final stage, Hamlin finished fifth. After entering the day holding the top spot in points by the skin of his teeth, Hamlin hung on to it as Kyle Larson dropped to 16th late.

Xfinity Series winner Kyle Busch started 40th but worked his way through the field during stage one, and a well-timed pit stop put him in the top five to start stage two. By the start of stage three, Busch had the lead. He couldn’t hang onto it, however, and handed it off to Elliott after leading after two different restarts. Busch also couldn’t hold off teammate Bell in the closing laps, finishing third.

Strategy came into play multiple times on Sunday, starting in stage one when several teams opted to pit just before pit road closed, and a caution for Kyle Tilley helped their cause. The move allowed Kyle Busch, Martin Truex Jr. and Austin Cindric, among others, to gain valuable track position.

Had Cindric not suffered a mechanical failure, he may have given Elliott stiffer competition. After trading the lead with Matt DiBenedetto early in stage two, Cindric looked like he could be a factor at the end, but he was forced to the garage for repairs after losing drive on one of his rear wheels. Cindric managed to get back on track but finished 27 laps down.

Whether his mechanical woes changed the complexion of the race is mere speculation, but there’s a good chance they did.

Things are about to get hot, and that’s not just tempers. The Cup Series enters the dog days of summer with a pair of Sunday afternoon races: 400 miles at Atlanta Motor Speedway next Sunday (July 11) afternoon and 300 at New Hampshire Motor Speedway the following weekend. With forecasts in the upper 80s for both races, it could be worse, but both tracks will be slick and present unique challenges, and tempers could get thin in a hurry.

It’s a pleasant surprise that NASCAR didn’t schedule Atlanta’s summer special at night. The track has lights (New Hampshire does not) and night racing is popular with many fans. But Atlanta’s ancient asphalt coupled with July heat will almost certainly give fans a better show than a night race. Props to NASCAR for that.

How … is the playoff picture shaping up with six races to go?

The number of drivers who have not won a race in 2021 but are probably going to is dwindling. Hamlin is still winless but looks like he’s just a tick behind actually getting it done. Ditto Kevin Harvick, though a win is looking less likely for him than it does for Hamlin. The rest of the current top 16 without wins — Austin Dillon, Tyler Reddick, Kurt Busch and Chris Buescher — all fall into the category of can win but have yet to show the consistency that usually precedes a victory.

And one of them isn’t getting in without a win. Michael McDowell in 17th has a win and will bump someone. It’s looking like that battle will be between Busch and Buescher, while Dillon and Reddick have an over 40-point cushion. Six races is enough time to squander those points, but it’s really up to Busch and Buescher to take advantage of every opportunity. Busch came out of Road America with a bigger advantage than he entered with, but he’ll need to guard those points for the rest of the summer. The field is just about set, barring a surprise winner from behind.

Cindric is definitely pure speculation. Wow. Chase had the car and raced smart all day. It was his race to lose.

Baby Busch’s ego will keep him beating up the minor leaguers, though he’ll use the excuse that his sponsors want it. He has a better chance to win against the competition in the minors.

Kyle was contractually obligate to run at RA and this weekend at Atlanta. Get over it.

The minors is where Wallace needs to be not kyle Busch. I’m not a Kyle Busch fan but for Christ sake he’s got over 50 cup wins plus he’s a champion at the cup level.

How many Cup wins does Richard Petty have? 200. That’s the only number associated with him. Nobody mentions any other wins. The only wins that should count for Baby Busch are Cup wins. Hank Aaron doesn’t count the home runs he got in high school. Jordan doesn’t count the points he got in college.

There was an article on Smokey is the Toronto Star on Saturday. If anyone is interested…

So, just count the 59 wins in Cup and get over yourself.

So, just ONLY count the 59 Cup wins and get over yourself. Baby Busch has 59 wins. Just like Richard Petty has 200 wins and David Pearson has 105 wins.

Funny that it is “best driver” when Larson wins, but “best car” when Elliott wins.

Hey Ajax when petty was winning his 200 wins they raced 2-3 times a week including week days and on small tracks even less than a half mile. About 60-70 races a season and that’s how Pearson got his 105 victory’s back on those days sponsors were hard to get, not like now days. The field is much more even and it’s all about the money like every sport is now. Victory’s are harder to come by now. So baby Busch as you call him with his 59 cup wins is about equal to petty and pearson not to mention my former driver Jeff Gordon with 93cup wins. This is not to mention kyles 101 x-finity wins and lots of truck wins also. Ajax I bet your driver is the loser in the 23 car. How many cup wins has he got ol’ brain-e one.

Do you and Jojo live together

Pay attention, Matilda. I haven’t supported this Lou guy and his obsession with Bubba. He hates Bubba as much as you are in love with little Kyle Larson.

I also don’t give a sh*t about what Richard Petty did back when you actually had your teeth and hair.

I’ll tell you something else Ajax another number richard petty has is 7 Daytona 500 wins and 7 cup titles or have you forgot along with several most popular driver awards. Choke choke.