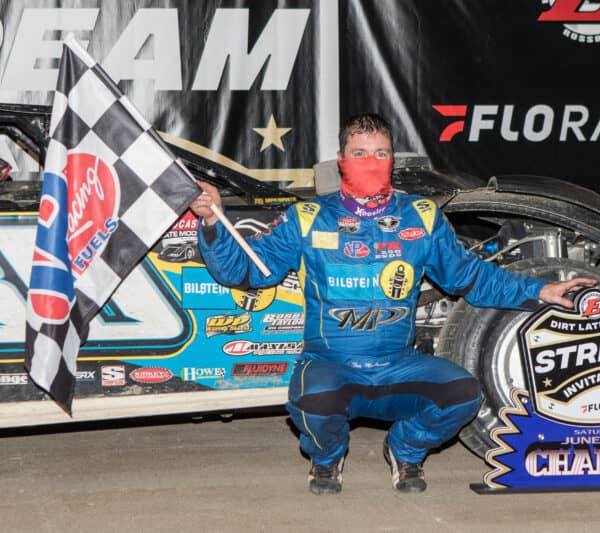 The Hell Tour leaders surge ahead only to stop themselves, the Posse defends their turf and Tim McCreadie keeps Superman at bay.

Spotlight: 2021 DIRTcar Summernationals
Where: Davenport Speedway – Davenport, Iowa (streamed on DirtVision)
Why We Chose It: At $5,000-to-win, Thursday’s highest-paying race that wasn’t rained out.

Tony Jackson Jr. rocketed away from the field in the opening laps of Thursday night’s late model feature, but shortly after Billy Moyer Jr. brought out the first yellow of the race on lap 8, Hell Tour wins and points leader Bobby Pierce took the lead and never looked back, comfortably winning his fourth race of the tour.

. @dirtvision REPLAY: @BobbyPierce32 takes the checkered flag tonight at Davenport Speedway, his second victory in as many nights! pic.twitter.com/bGIc1fXkS9

Though Pierce’s efforts made the feature academic out front, the Iowa quarter-mile proved extremely racy, with a mid-race battle in the top five between Tanner English, Dennis Erb Jr. and Cade Dillard going three-wide for multiple laps in their entirety. Both Brandon Sheppard and Shannon Babb scored top-five finishes after improving 10-plus positions on-track during the feature.

Pierce would go on to win Friday’s Hell Tour feature at the Dirt Oval on Route 66.

It took Lance Dewease 12 laps to take the lead of Friday’s feature at the Grove, but once out front the race was decided. Easily navigating a rash of late-race incidents, Dewease pocketed the richest single-night purse of Pennsylvania Sprint Speedweek, scoring the “Posse” a big win on their home turf (Dewease won the opening night of Speedweek at the Grove last Friday as well).

. @WilliamsGrove REPLAY: @LanceDewease continues to add to his legendary career at the Grove with another victory! pic.twitter.com/jw3GVFzu1I

Though he finished a distant second, Danny Dietrich was able to expand his points lead on Friday night after Brent Marks again found trouble; Marks brought out the race’s first yellow flag on lap 16 when he slowed on the backstretch, then wrecked out on lap 26 after polesitter Matt Campbell tipped over in front of Marks in turn 3, leaving him with nowhere to go.

With Jonathan Davenport moving closer in the LOLMDS points standings after a Friday night win at Portsmouth, points leader McCreadie re-asserted himself with a flag-to-flag feature win Saturday night at Muskingum County. McCreadie went virtually uncontested up front in scoring the Prime Solutions 50 victory, his second tour win of 2021.

The hard-luck story of the night went to defending series champion Jimmy Owens, who was running second inside of 10 laps to go before the throttle linkage in his car broke loose, sending the No. 20 behind the wall. Owens remains winless on the tour 18 races into the 2021 campaign after scoring 11 trophies a season ago.

After taking the victory in Joliet on Friday night, Nick Hoffman has now won the first eight DIRTcar modified features of the 2021 Hell Tour, and has still led every lap in all of them. The only reason that streak ended on Saturday night was because Hoffman left the tour to tackle Lawrenceburg Speedway’s $10,444-to-win Merrill Downey Memorial race. Of note, in Hoffman’s absence, former Frontstretch Driver Diary contributor Kenny Wallace won Saturday night’s Hell Tour modified feature at Fayette County Speedway in Illinois.

Defending World of Outlaws champion Brad Sweet swept the weekend at Cedar Lake Speedway in Wisconsin, stealing the feature win from Carson Macedo on a late-race restart Friday night after Macedo spun his tires on the start, then besting Macedo twice in the mid-race on Saturday.

. @dirtvision REPLAY: @racecedarlake may as well hand the deed to the track over to @BradSweet49 because he owns this place! The two-time and defending series champion makes it five in a row in New Richmond! pic.twitter.com/SHsF830B4W

Said Sweet in his victory lane interview Saturday, “I wish the King’s Royal was at Cedar Lake.” That may not be the case, but the No. 49 team appears in top form heading to Eldora for the richest sprint car races of the season.

Friday night’s win at the Grove marked the fourth winged 410 sprint car victory for Dewease at the track in the last month. Call it expert marksmanship or call it “cherry-picking,” either way there’s one word to describe what Dewease is doing: winning.

Hell Tour late model points leader Pierce, besides being red hot behind the wheel, skipped Saturday’s race at Fayette County Speedway to attend his sister’s wedding. Kudos to the young man for having his priorities straight.

It’s a stretch to include someone that scored consecutive runner-up finishes in this section, but Macedo has to be wondering what he’s got to do to score a few more wins after watching two strong runs at Cedar Lake this weekend evaporate at the hands of Sweet and the No. 49.

Another strong run for Owens, another late-race malady that sidelines the No. 20 car. 2021 is definitely seeing a changing of the guard on the LOLMDS tour.

Joining Owens in the “snakebit at Muskingum” category in the Prime Solutions 50 on Saturday night were Mike Marlar and Anthony Kinkade; Marlar missed both his heat race and the B-main as his crew rushed to change engines before bringing out an early yellow in the feature and limping home 18th. Kinkade brought out the yellow twice for jumping the banking on both sides of the racetrack on laps 14 and 34 respectively. He finished 21st.

Any delivery driver that pulls off this order would easily top the Ross Chastain in the McDonald’s drive-thru Tweet from Daytona earlier this year. And speaking of said drivers, if you’re ordering delivery over the holiday, tip them well.

Those reading this column will notice that it’s a bit thinner this weekend, and there’s a reason for that. Namely, it’s the 4th of July and this writer is taking the opportunity to celebrate. As a proud American, I’m not sure I have a holiday I enjoy more than the 4th, and as much as I love dirt racing taking some time to eat copious amounts of hot dogs, sit on the beach and watch fireworks at night limited my time in front of a streaming screen this weekend. To all of our readers this weekend, wear red, white and blue, eat well, drink responsibly and take pride in being part of the greatest nation mankind has ever created.

Speaking of this being a holiday weekend, our beach house has limited screens and bandwidth, meaning that my houseguests who between all of them have been to one dirt race in 60-plus years of life have been subjected to DirtVision and MAVTV Plus for the first time over this weekend. Even they had little trouble picking up on the fact that a) the PA at Williams Grove could put an ADD clinic to sleep and b) that “blue smoke, blue smoke, it’s a baby boy” as the PA at Muskingum County put it when a 4-stock car’s engine expired during qualifying was about the worst call in motorsports since Marty Reid ended an Xfinity Series race at Kentucky a lap early. This isn’t rocket science; act excited and leave the crappy jokes for open-mic night at the local community college.

Sadly, that wasn’t the only form of auditory hell plaguing this weekend’s race coverage. Thursday night’s Hell Tour coverage from DirtVision at Davenport was so plagued with at-track audio cutting in and out that I turned off the stream the second the Tour late model race ended, despite the track being supremely racy all night long. It’s one thing to deal with technical limitations, it’s another to deal with literal disorientation, and that line was crossed Thursday night. DirtVision’s own commentator Ruben Mireles was caught on a hot mic exclaiming “f***ing DirtVision” earlier in the program when suffering technical difficulties. Mireles apologized profusely on air later in the broadcast for saying on-air what everyone watching the stream was thinking.

While on the topic of the Hell Tour, this Tweet says it all.

Why can’t the Summernationals just call it a C Main and a B Main? This is far more cumbersome than it needs to be

Trying to apply logic and reason to sprint-car racing fans in Pennsylvania is like trying to apply logic and reason to TikTok creators, but it really is shocking to see how much flack Lance Dewease has been catching this week for “cherry-picking” races close to home. Hello? Brandon Overton is the hottest super late model driver in America, but his schedule has had plenty of trips to the Modocs of the world. And besides, this week it even made dollars and cents.

The 69k crew really are a bunch of cherry pickers. Why stay close to home and race for $15k when they could have towed to Cedar Lake and raced for $10k! Sad!

Area Auto Racing News reported nearly a month ago that executives from American Racer Tire had indicated that the ongoing tire shortage impacting short-track racing across the United States is going to continue throughout the summer, and that all tracks need to be implementing conservation steps on tire supplies, going further to state that cancelations over the summer were possible. That came to fruition this weekend, with the Viking Speedway in Alexandria, Minn. canceling their July 3 racing program due to a tire shortage.

Attention Racers and Fans : After further discussion with multiple different tire suppliers and our racers, we have…

The local paper in Alexandria further reported that the track was unsure whether the ongoing shortage would impact future racing programs. With the tire shortage impacting everyone from local fairgrounds to the Hell Tour, this story sadly may have more staying power than a Hoosier right rear.

Lastly, I’m withholding comment on this matter, even though this column has touched on this issue before, until more details are available. For now, pray for all those involved.

Real bad incident at Hartwell Speedway in GA tonight.. FWD Car tumbled over an infield wall and into the pits where some youths were playing. Helicopters life flighted out the kids, it sounds real bad. We don't have any more details at this moment #sayaprayer @DGodfatherMoody

103 – career wins for Dewease at Williams Grove after taking the trophy Friday night.

$15,000 – winner’s purse for the LOLMDS at Muskingum County on Saturday night, the richest purse in track history.

Where it Rated (on a scale of one to six cans with one a stinker and a six-pack an instant classic): We’ll give the weekend a couple lukewarm Budweisers. Dirt-track racing is as American as it comes, but a lot of follow-the-leader features, both Hell Tour points leaders taking Saturday night off and a potential tragedy at Hartwell made for a sour-tasting weekend, at least in the case of the races this writer had time to watch.

Up Next: For those looking for a race to stream on the 4th of July evening, Grassroots Sports TV will be the unlikely home for the night’s richest race, a $20,000-to-win super late model feature at Beckley Motorsports Park that is being run unsanctioned. Later in the midweek, the Super DIRTcar Series will get back on track at the Ransomville Speedway in New York.