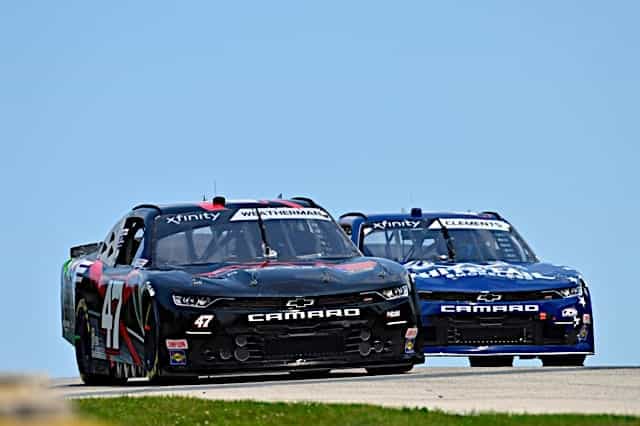 Last weekend was an excellent time if you like road racing. NASCAR had the NASCAR Cup and Xfinity Series at Road America, while INDYCAR was at Mid-Ohio. Finally, you had IMSA at Watkins Glen. I’ll be honest and admit that literally nothing was there from the Sahlen’s Six Hours at the Glen weekend. All but no souvenirs (other than the track’s souvenir store, known as The Pyramid), limited food offerings, you name it. In comparison, the Six Hours weekend was possibly as busy as I’ve ever seen it.

For the NASCAR Cup Series, this past weekend was new territory for a good chunk of the field. Yes, the Cup Series had raced at Road America before. Problem is, no one in the field was alive when that happened. Given Road America’s size, it is a legitimate challenge to cover the action.

Jockey Made in America 250 presented by Kwik Trip

Sunday saw the NASCAR Cup Series return to Road America for the first time since 1956. Believe it or not, the race back then was one lap longer than what we had Sunday. I have no doubt that some fans thought that this was going to be a four-hour race. It wasn’t. The 251 miles were run in under three hours. That said, it was a bit of a car breaker.

Road America is a track that punishes you if you run wide in a number of ways. You can get stuck in a trap, like Anthony Alfredo did. You can end up in the grass in some places. Just getting on the curbs can break things because they become deeper as you go back on them on corner exit.

Pre-race coverage was dominated by the giant news of Trackhouse Racing Team acquiring the NASCAR assets of Chip Ganassi Racing at the end of the season. Truly a monumental occasion.

As a result, there really wasn’t much in the way of a race preview. Given the race that we ultimately got, where two of the top three finishers started at the very back of the field, I think viewers deserved more there. Unfortunately, NBC’s scheduling for Sunday was always going to be tight with the Honda Indy 200 at Mid-Ohio being right before Countdown to Green.

Watching this race Sunday made me think that NBC’s focus was too narrow. While there didn’t appear to be as much passing per capita as what you saw during Saturday’s Xfinity race, there was still plenty of action to be had. It just seemed like you rarely saw anyone that wasn’t running in the top 10.

For example, Kyle Larson ran up in the top five for much of the race. Then, Alex Bowman had some kind of a braking issues and ran into the back of Larson on lap 57 in turn 5, spinning Larson out. Larson resumed and eventually finished 16th, costing him a chance to take the points lead. Bowman dropped like a stone to 22nd.

You only heard a little about Larson dropping back and almost nothing about Bowman after some radio chatter. Once they dropped back following the incident, it was like they didn’t matter. That doesn’t bode well going forward.

Since the race ended quite a bit ahead of schedule, there was a fair amount of post-race coverage. That gave Chase Elliott the freedom to take his sweet time with his on-track celebrations. He skipped the burnout area the first time by in order to do a complete lap around the track, then did a burnout at the start-finish line. Then, he returned to turn 5 for his interview. I think they could have gotten more interviews on-air during that time than they did. Ultimately, they only ran two in the 20+ minutes between the checkered flag and the end of NBC’s slot. There were more on NBCSN, including Ross Chastain (probably had the best car after Elliott at the finish) and Tyler Reddick (scored the most points).

Honestly, this race ended up being a lot cleaner than I thought it was going to be. I suppose this is the Cup Series. The drivers here are supposed to be really good. With all the mechanical issues that hit Sunday, it’s really hard to get any kind of idea as to what happened since all of that stuff (gears, lockers, rear end stuff, suspension, etc.) is considered to be a trade secret these days. Basically, the stuff that NASCAR admonishes you to never take pictures of at photo meetings because of “violating team’s competitive privacy.” Austin Cindric did explain to a degree what happened to his Ford (one-wheel drive only works on a bicycle), but being able to see that would be so much better. I feel like that censorship will go away next year with the NextGen car since everyone’s theoretically getting the same stuff.

I guess I just expected more to happen Sunday. Or, more things did happen and we didn’t see it because NBC didn’t show it. That bites either way.

See also
Thinkin' Out Loud: 2021 Jockey Made in America 250 at Road America

Race fans looking for some kind of preview for Saturday’s 45-lap on NBC needed to look elsewhere Saturday. That wasn’t the plan, but it’s the way it turned out. Prior to the race, NBC was airing a Premier Lacrosse League match that ran long by approximately 10 minutes. I think that Countdown to Green was going to be pretty minimal anyway, but we ultimately got an introduction, a commercial break, then the command. Not a whole lot of information.

Compared to Sunday’s race, I found the race to be a bit more inclusive. There were more drivers that got coverage through the field. Why that was so, I could not tell you. It just felt that way to me.

You also had a rather unusual instance early on in the race when Ty Gibbs got busted for switching lanes on a restart. Rick Allen quickly picked up on it when it happened and noted that a penalty would be coming. There was a rare addition to this penalty in that he was declared ineligible to earn stage points. I cannot recall a time where a driver that was eligible for stage points was declared ineligible due to a penalty.

That’s rather strange, and I would have liked a more detailed explanation for that. To that end, NASCAR apparently just skipped over Gibbs and gave stage points back to 11th position. No explanation was given for that, either. While I don’t think they would have needed input for NASCAR for why the penalty was issued (it was rather obvious), I think I would have wanted input for what they were doing with the stage points.

Once again, Jac Collinsworth was in the typical Rutledge role as the roving reporter, talking to fans and hanging out in hammocks (literally). With Collinsworth doing that, it just doesn’t seem natural. It comes off as forced. That said, there were definitely some characters at Road America last weekend. In addition, a lot of people think of Jac as nothing more than a nepotism hire since his father is Cris Collinsworth, analyst on NBC Sunday Night Football. This is despite the fact that Jac actually went to college with an eye toward television (he has a degree in Film, Television and Theater from Notre Dame).

Truth is, Jac has worked outside of NBC Sports for part of the time since he graduated from Notre Dame. Yes, his dad also works for NBC Sports, but he has his own credentials that are good enough to justify his position with NBC Sports. He just seems miscast here.

Kyle Busch won again, for the fourth time in five races this year. That said, it was still an exciting race to watch. There was plenty of action for position during the race. There were contrarian moves to take positions and quite a bit of contact.

Post-race coverage was almost non-existent due to time constraints. Viewers only got a post-race interview with Busch before the network left Road America to get to the Breeder’s Cup coverage from rainy Belmont Park.

That’s all for this week. Next weekend, the NASCAR Cup and Xfinity Series make their second visit of the year to Atlanta Motor Speedway. This weekend replaces the weekend at Kentucky Speedway. Honestly, daytime races in Georgia in July sound like a terrible idea. Current forecasts are cooler than I thought it would be, but it’s still going to be humid and there’s a chance of thunderstorms both days. At least they have lights.

The Camping World SRX Series will be at Slinger Speedway in Wisconsin, where the result of tonight’s Slinger Nationals will determine who the wild card entry in the race will be. Also, Kyle Petty’s new TV show, Dinner Drive with Kyle Petty, premieres Thursday evening at 8 p.m. on Circle (both over-the-air and via Peacock). TV listings can be found here.

I’ll have critiques of the Cup and Xfinity races from Atlanta in next week’s edition of Couch Potato Tuesday here at Frontstretch. For the Critic’s Annex, I’m going to take a look at Friday’s WeatherTech 240 at the Glen. I was at this race and will try to add additional context.

The reason for no stage points is apparently there is a different rule on road courses for getting out of line. You keep racing and are not sent to pit road for a drive through. I think this is to keep a driver from not being penalized as much compared to an oval. Personally since this is only a restart issue a drive through penalty would essentially do the same thing other than a strategy play by the team.

I thought you only got points, stage or race, if you declared for the championship in that series. Isn’t Gibbs doing ARCA full time and a partial Xfinity schedule?

I miss Rutledge. He added much flavor to the broadcasts. Hope he returns soon.

Ugh, I don’t miss Rutledge at all. If Rutledge and Mikey Waltrip never show up on a race broadcast again, I’d be thrilled.

I have yet to hear anything of value coming from MWaltrip or Rutledge. Both are annoying! At least MWaltrip was a former driver and owner, but how in the world did Rutledge get a job on the NBC boardcast? He must be someone’s nephew high up the executive office of NBC sports and was just given the gig to occupy his time.

Both of them are?Don’t care if they ever do another race They need to be replaced