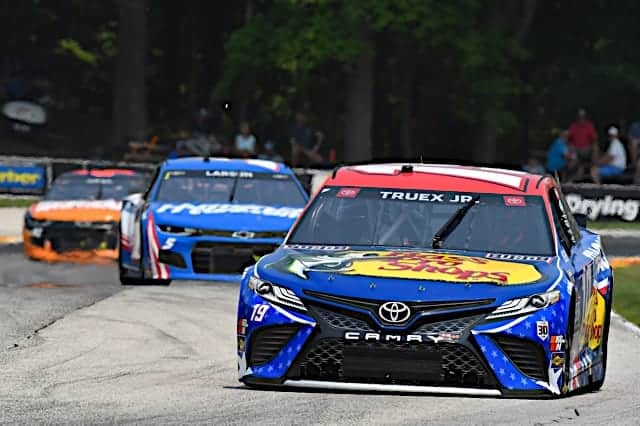 The NASCAR Cup Series is halfway through the road course section of the 2021 schedule after the race at Road America on July 4. Tucked away in the Wisconsin hills, NASCAR finally returned after 65 years to the Elkhart Lake region with a familiar face in victory lane.

Chase Elliott overcame a botched qualifying run to dominate by leading 24 laps. The defending series champion, Elliott, has scored his two wins this season and two of five last season on the road courses. Elliott has proven that he is the king of road courses, sitting behind only Tony Stewart and Jeff Gordon on the all-time win list on those tracks. With that win, Hendrick Motorsports has won ten of the 20 races this season. The playoff picture is coming into clearer focus with multiple winners this season and Hendrick Motorsports becoming the top dogs.

Only three drivers, Johnny Allen, Rex White and Paul Goldsmith, out of the 26-car field from 1956 are alive from the first race at Road America. Goldsmith finished best of the three with a fourth-place finish. A lot has happened from the first race to the most recent race on Sunday. Richard Petty did not even start his racing career until two years after the first Road America race. The oldest driver in the 2021 Cup race, Kevin Harvick, was not born for another 19 years. Even with all the changes that the sport has gone through, racing at Road America is still the same.

Even as the odds on favorite, Elliott had to climb up through the field, but engine number nine found his way to the front by the halfway mark. The last time that someone came from that deep in the field to win was Justin Haley‘s surprise win at Daytona two years ago. Elliott’s performance was more significant compared to the road course legends. While Elliott is only behind Stewart and Gordon on the all-time road course wins list, the worst starting position by either driver in their wins was 13th. Elliott is winning at road courses at a better rate than Stewart and Gordon, and it is only a matter of time before Elliott cements himself in road course history.

Kyle Larson had an eight-race streak of top-10 finishes that ended after being spun by teammate Alex Bowman late in the race. Larson would end up finishing 16th. Even with his 2021 performance, Larson is still not the points leader as he had to overcome over 150 points to be within three points of Denny Hamlin. Larson has been no slouch at road courses, but has been bitten by bad luck. Besides the engine failure at Talladega, Larson’s worst finish was at Daytona Road Course after taking a corner too fast and finishing 30th. In all four road courses races, Larson was contending for a top-10 spot late in the race. Days like Sunday are cautionary tales for ones that could happen in the playoffs. Sometimes racing incidents are out of your control. Larson has proved that he can perform well in the regular season, but can his dominance continue into the playoffs?

As Larson’s day was ruined by a late-race spin, Hamlin maintained his narrow three-point lead over Larson in the standings. Hamlin has been shut out of victory lane, yet he still tops the standings. While Larson has won more races, Hamlin has a better average finishing position than Larson and has been running at the finish of every race this season. The last time that Hamlin failed to finish a race was at Indianapolis in 2020, which was 41 races ago. Only one driver, Austin Dillon, has a longer streak of running at the finish than Hamlin. As the regular season winds down and drivers are scoring multiple victories, each week decreases the chance of someone bumping a winner out of the playoffs. Hamlin has a five-race cushion over the cutoff in points, and is about two more races with no new winners from being locked into the playoffs. Consistency is key to a great regular season and a deep playoff run.

Michael Annett has not scored a top-three finish since Chicago in 2019, which was 67 races ago. Annett has been in the shadows as a skilled veteran for the past few years with JR Motorsports. Drivers like Noah Gragson, Tyler Reddick and Justin Allgaier have made headlines with their wins, championships and on-track news. Yet Annett took advantage of pit strategy with fresher tires to finish third at Road America. While Annett has scored one Xfinity win in his career, it’s a pretty good day when the only cars that beat Annett are the two Joe Gibbs Racing cars of Kyle Busch and Daniel Hemric. Annett has not won this season, but a third-place finish will help the confidence of the No. 1 team as they sit near the playoff cut line.

O Ford, where art thou? In the first 10 races, Ford won the biggest race of the season and had four different winners overall. Now, they have been shut out of victory lane in the last 10 races. Ford had contenders for the win on Sunday, but not from heavy hitters like Joey Logano or Brad Keselowski. Austin Cindric led two laps before rear gear problems ruined his day with a 38th-place finish. Matt DiBenedetto led some laps because of some good pit strategy and finished 10th. Yet, the best performing Ford was Chase Briscoe‘s top-five finish as fresher tires made the difference. The last Ford win this season was at Talladega with Keselowski back in April. After 20 races last season, Ford had won 11 races. Ironically, the last time a manufacturer was shut out for a win in 10 straight races was in 2020 with Chevy. NASCAR is returning to Atlanta, one of the tracks that Ford won this season. If Ford can’t perform well in Atlanta, it might be time to hit the panic button. A year of racing can change everything, as now Chevy is the top dog with Ford teams left scratching their heads.