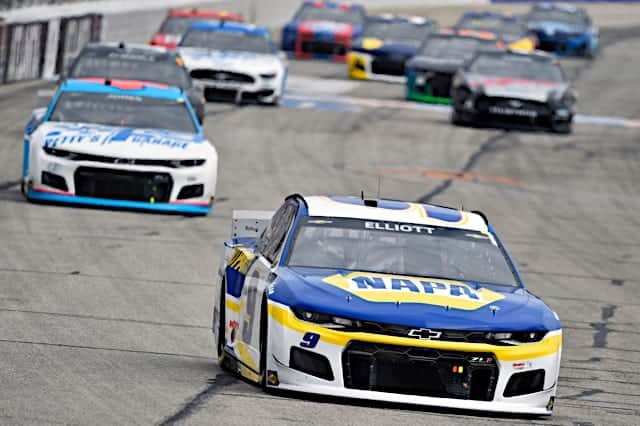 1. Will we long for this Atlanta surface when it’s gone?

At some point, father time and the elements of nature will force the inevitable repave of Atlanta Motor Speedway’s aged surface. If you’ve not been able to see a race at AMS in person in recent years, you’ve missed a real treat. Much like Darlington’s fourth turn, it’s a downright thrill to watch drivers wrestle and battle loose race cars with worn out tires around Atlanta, especially in the fourth turn from the grandstand named for Richard Petty. If it’s driving talent you want to see, this surface creates it.

The repave will come as it has to many tracks through the years. That, of course, will mean a new slick surface with no grip that’ll take time to come into its own. Then again, the first ever race on this current surface gave us a three-wide finish that also included Benny Parsons explaining that someone was “shot out of a canyon,” and Harris Devane, a South Georgia peanut farmer, winning.

Like this racing surface or loathe it, but to quote the Brooks and Dunn song, “You’re gonna miss me when I’m gone.”

2. Is it Kyle Larson against everybody else?

Even if Kyle Larson wasn’t having an insanely good year, he’d be a smart pick to win this weekend in Atlanta. He straight up dominated here last March, leading 269 of 325 laps. Other than the Bristol dirt, few surfaces are better suited to Larson’s ability than Atlanta’s, as its worn surface puts things squarely in the hands of the drivers more than almost any other track.

Atlanta plays right into Larson’s strengths. Barring a mechanical issue or the race being one of fuel strategies, a win this weekend in the Peach State will involve having to get past Larson.

3. Is there a path to the playoffs for Matty D?

With just four top-10 finishes this year, it’s been a frustrating season for Matt DiBenedetto and the No. 21 Wood Brothers machine, with a current spot of 20th in the points standings. There’s a case to be made, however, for Team Penske to pool its efforts toward the No. 21 to help it into the playoffs, as its driver also heads toward tracks where it should be expected that he’ll run well.

Currently, Ryan Blaney, Brad Keselowski and Joey Logano are solidly in the playoff field, each sitting inside the top 10. At this stage, why wouldn’t Penske pool support to get one of its satellite cars into the NASCAR Playoffs? Plus, DiBenedetto is coming up on some strong tracks. Bristol and Daytona are two of his top seven tracks in terms of average finishes, and as history has shown, being in a position to take advantage of a restrictor plate crapshoot plays dividends — just ask Michael McDowell. Race fans have a love affair with nostalgia. And aside from Erik Jones winning in the No. 43, few things would stoke those emotions more than the No. 21 punching its ticket to the postseason with a win.

4. Should JR Motorsports make the Xfinity Series its personal playground?

With Austin Cindric moving up full time to the NASCAR Cup Series in 2022 and Kaulig Racing shifting energy toward its Cup efforts, the caliber of top-line teams in the NASCAR Xfinity Series stands to be lessened. That, of course, also brings up the future of a team with one of the most famous names in racing: JR Motorsports.

One school of thought says for Dale Jr. and company to follow in the path of Dale Earnhardt Inc. and take the team cup racing. The other? Remain a big fish in a small pond, stay in the Xfinity Series and continue dominating. Guys like Randy LaJoie, Jason Keller, Sam Ard and Jack Ingram made a name for themselves by being perfectly content with the fact that they were Busch Series drivers, and Frank Kimmell and Venturini Motorsports did likewise in the ARCA Series.

There’s no reason for JR Motorsports to risk ruining its rate of success by going to the cutthroat world of the NASCAR Cup Series.

5. Should we embrace Daytona and Road America’s new places (on the schedule)?

If you grew up in South Georgia as I did in the 1980s and ’90s, July 4th usually meant the pre-noon Firecracker 400. If you lived near there, it was perfect. The race was over by 1 p.m. or so with plenty of time to drive home, and if you were lucky, run into drivers at a hotel or the beach in the afternoon.

But something changed over time. When the 400-miler went under the lights, it lost some uniqueness, and it was hard to set itself apart. That’s why moving it to the end of the regular season is perfect. It sets up a winner-take-all possibility at Daytona; you didn’t have that before last year, and it’s something that fans should be excited about.

Another thing that should be embraced? Road America on July 4th. If I’m a new race fan and saw Sunday’s race, it’d be hard not to see that crowd and say, “What do I have to do to be part of that next year?!?”

NASCAR should be commended for doing two things: creating an exciting Fourth of July tradition and injecting relevance into a race at Daytona that’s not even the track’s marquee event.