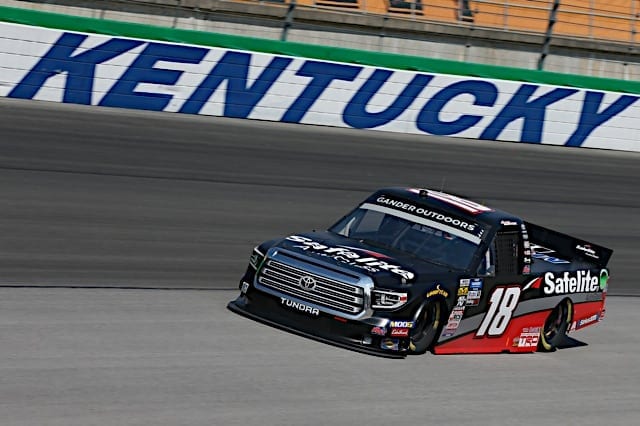 On Friday, July 9, the Trucks will tackle the dirt at the Knoxville Raceway in Iowa. Then, they’ll make their long-awaited return to Watkins Glen International on Aug. 7 to conclude the regular season.

The Truck Series has hosted a 23-race schedule since 2015, with several tracks coming and going along the way. Before that, the series held 22 races each year between 2012-14 and 25 races from 2003-11. These numbers have always been visibly lower than their counterparts, the NASCAR Xfinity (33) and Cup (36) series.

With the truckers having so many off-weeks on their calendar, perhaps this might convince some that there are too many open spaces on the series’ calendar, so here are a few tracks that could make a good case for the Trucks to have a 28-race season.

Okay, the Truck Series already has Martinsville Speedway on its schedule. The Paperclip has hosted the series since 1995. But when Xfinity and Cup had their doubleheader there in April, where were the trucks?

2021 marks the first time that Trucks does not have two dates at Martinsville. A year ago, all three national series hosted a tripleheader weekend, featuring the penultimate races for all three series. So it’s a mystery why NASCAR did not choose to include the Truck Series for the spring lineup at Martinsville.

On the weekend of July 17-18, Xfinity and Cup make their way up to the Granite State to compete at New Hampshire Motor Speedway. But, you guessed it, the Truck Series will miss out on this expedition.

The Magic Mile hasn’t held a race for the tertiary series since 2017 despite hosting every year since 1996 before that. It has been a place for plenty of New England-based drivers to get their feet wet in NASCAR competition, such as Ryan Preece, Joey Logano, Randy LaJoie, Kaz Grala, Austin Theriault, the late Ted Christopher and Mike Stefanik, Eddie MacDonald and more.

The Truck Series’ absence doesn’t make much sense, but a return would give fans a quadruple-header weekend alongside Xfinity, Cup and Whelen Modified Tour. Needless to say, plenty of lobster would be served in victory lane if NASCAR squeezes in a slot for the Trucks.

With NASCAR’s rapid schedule changes ahead of 2021, one track that unfortunately bit the dust was located in Sparta, Ky.

For two full decades, Kentucky Speedway had at least one visit from the Truck Series every year, from Greg Biffle’s inaugural win in 2000 to Sheldon Creed’s first career win in 2020. Unfortunately, Creed’s win was a rain-shortened one, symbolic of the incomplete farewell the series had with the track.

Over the years, the track featured the series debuts of Kyle Larson (2012), Brett Moffitt (2013) and Corey LaJoie (2014). It’s also been a kind track to younger drivers as well, with Ty Dillon, William Byron, Christopher Bell, Ben Rhodes, Tyler Ankrum and the aforementioned Creed all scoring victories at the 1.5-mile circuit.

As Kentucky sits quietly while piles of old tractor-trailers gather in its parking lots, the possibility of the Bluegrass State’s raceway hearing the roar of engines again looks bleak for now. But there’s always the chance of cars (or trucks) returning to the track surface.

For lovers of rough, exciting short track action, Iowa Speedway is a good source of that style of racing. Problem is, the speedway has not hosted a NASCAR event since 2019, with the COVID-19 pandemic forcing NASCAR to pull all dates from the speedway in 2020. That continued through this year, with only the ARCA Menards Series racing there this season.

With its unique configuration, Iowa has widely been considered a popular venue for short track racers to display their talents. The Truck debuts for Austin Dillon (2009), Brandon Brown (2014), Bell (2015), Christian Eckes (2018) and Chandler Smith (2019) all came at the 7/8-mile oval. It also serves as the home track of Moffitt, Landon Cassill, Michael Annett and Joey Gase.

If there’s a place for short track fans to rally behind for another Trucks date, it’s Iowa.

After not having a dirt race in 2020, the Truck Series was granted two in return. The first came at Bristol Motor Speedway in March, with the second coming at Knoxville this coming Friday. But to the shock of many, one place that missed an invitation back onto the schedule was Eldora Speedway in Ohio, which hosted the annual Dirt Derby (or Mudsummer Classic) from 2013-19.

“NASCAR didn’t take us off the schedule, we just didn’t renew our contract,” track owner Tony Stewart said in a statement. “We have our list of reasons for it, we’ve got some big things that we are trying to do with [Eldora], and we felt that we needed to go in a different direction.”

While the Bristol dirt weekend has come and gone with mixed emotions, it’s still a surprise that the place that originally brought dirt racing back to NASCAR isn’t on the schedule anymore. Whatever future decision Stewart may come to regarding NASCAR’s return to his track, it’s currently in a holding pattern, at least for now.

Get them back to Milwaukee. The Xfinity cars too.