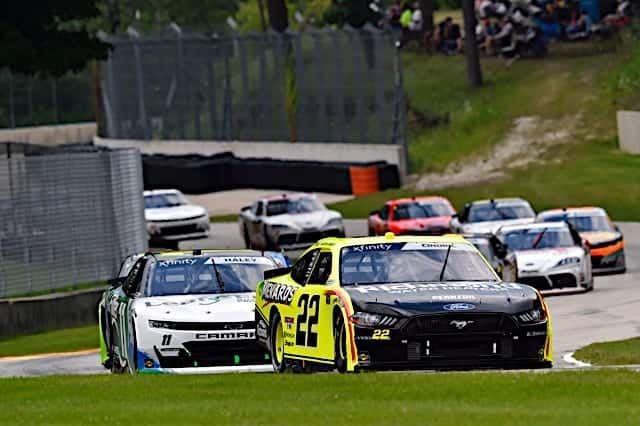 Three more times this year, the NASCAR Xfinity Series will race on road courses. By the time the checkered flag falls at the Charlotte Motor Speedway ROVAL this fall (Oct. 9), it’ll mark seven races on road courses this season for NASCAR’s No. 2 series.

That’s a few trips too many around road courses this season.

This isn’t a knock against road-racing overall. In this current era, due to drivers taking more personal investment as well as through avenues such as iRacing, few things in this sport are more exciting as a road-course race. Obviously, if you’re a Chase Elliott fan, you really love road-course racing.

It’s hard to blame track promoters at Indianapolis Motor Speedway and Charlotte Motor Speedway in recent years to look toward road racing. To be honest, part of me would not have been stunned if Atlanta Motor Speedway’s announcement on Tuesday (July 6) was that it’d be running a makeshift road course while the rest of the track was reconfigured. After all, AMS does have a road course on which Legends and Bandoloero cars race on.

The issue is this: NASCAR seems ill-opposed to giving the NASCAR Xfinity Series its own identity through the tracks that it chooses to fill out its schedule.

Should the mix of tracks in the AAA-equivalent of NASCAR be diverse? Absolutely so. That’s why adding Martinsville Speedway back to the schedule this year was a great move. The problem is that the dreaded “c-word” that’s a boon for track promoters but monotonous otherwise — companion races.

Sure, they’re great for fans and help cut costs for teams and drivers double-dipping in Cup and Xfinity during the same weekend. But this sport shouldn’t be about convenience. It should be about what’s most exciting.

Just because NASCAR’s top series races at a growing amount of road courses does not mean that the Xfinity Series should. I’ll keep beating this dead horse, but it still needs to be said: this series should not be “Cup Lite.”

That’s why when it’s time for the future schedules to be crafted, it should include not only more standalone tracks, but those that are unique. If NASCAR has the flexibility to run trucks at Knoxville Raceway, there’s no reason not to run at smaller bullrings that can whet the appetite for something that the NASCAR Cup Series does not have as much of — short-track racing.

Tracks such as World Wide Technology Raceway at Gateway, Memphis International Raceway, and Iowa Speedway have proven they can put on exciting racing in this series. Why not take it a step further by diving into bullrings such as Slinger Speedway (where SRX competes this weekend), Stafford Motor Speedway, Gateway, or Greenville-Pickens Speedway?  Of course, there’s the other simple solution — giving the Xfinity cars their own marquee event at Indianapolis across town at Lucas Oil Raceway.

The drivers in this series are chomping at the bit to prove how good they are. Building more short tracks into the schedule would play right into that, and the series would be all the better for it.

What To Watch This Week…

This weekend’s Credit Karma Money 250 at Atlanta Motor Speedway will mark the first time the drivers of the NASCAR Xfinity Series will tackle a track for the second time this season. That won’t happen again until Aug. 27 at Daytona International Speedway.

The Atlanta race this past March was marked by two things: Justin Allgaier’s late charge to spoil a dominant day by Martin Truex Jr. and a post-race confrontation between Daniel Hemric and Noah Gragson.

Speaking of Gragson, Atlanta marked his first of four top-four finishes this season. Three of them came between Atlanta and Darlington Raceway, giving him three such finishes in the top four with a finish in the same position at Pocono Raceway being his first top-five finish in seven races. Given that Atlanta comes two races after that and his recent success, count Gragson as among those looking forward to this weekend.

Next year in Atlanta? A must-see

Assuming that the first on-track race next year at Atlanta Motor Speedway will be the Xfinity event as it was this year, the Xfinity Series may have one of the most anticipated early-season events next year. Whichever race leads off AMS in 2022, it’ll be the first race on the track’s new reprofile that’ll narrow the width of the racing surface and increase the turn banking to 28 degrees.

Will the first race be a stud or a dud? All eyes will be fixed on the race to see. Who knows, maybe we’ll see the same as we saw in the first race on the current surface – a three-wide finish in the ARCA event.

Totally agree that xfinity should run more stand alone or xfinity/cuts weekends. I enjoy road courses for their unpredictability, should be similar on short tracks. I still remember when the Late Model Sportsman division had it’s own identity. Plenty of other series Cup can pair with IMSA and ARCA(owned by NASCAR), Trans Am(great racing, saw them at Sebring this year), Indycar, etc.