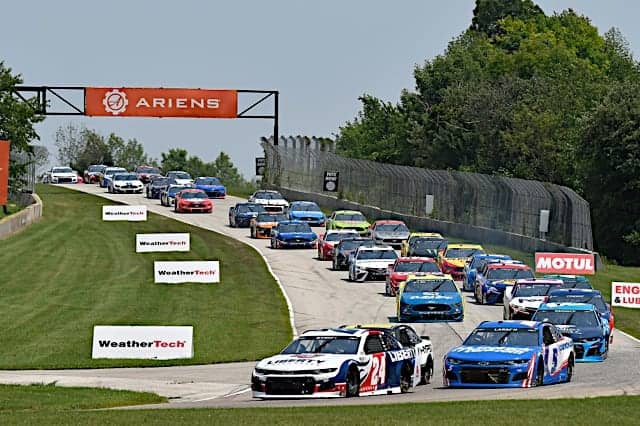 What can NASCAR do to fix road course races?

The NASCAR Cup Series event at Road America was a pretty solid race.

There was one huge issue with it, however.

Yep, 22 whole minutes between stages thanks to a caution for Kyle Tilley at the end of the stage. NASCAR could have ran 10 laps under green flag conditions in that amount of time. Anybody order a pizza at the start and get it delivered before the restart?

Road course racing in stock cars are exciting because these cars are just not made to turn right. A lot of power relative to other major racing series, a ton of weight and itty bitty brakes basically turn the field into 40 ballerina hippos.

But the thing that has really started to kill road racing in NASCAR is these stage break cautions. It just kills the flow of the race, and with how short distance wise these races are, it puts teams in one of two buckets strategy-wise. Strategy usually doesn’t come up often in stage three unless there’s a caution right at the fuel window, like at an oval.

There are a couple of ways around this. The first would be to keep stages on road courses but to eliminate stage cautions. That could work, but it would still add a bit of a wrinkle to these races.

The best solution would be to just finish all three stages on the last lap. The top 10 would get stage points for the first two stages, and the winner would receive a total of seven playoff points. Have crew chiefs spend three hours trying to figure out the right call of what to do. It worked out pretty well at Pocono Raceway a couple of weeks ago.

See also
Thinkin' Out Loud: 2021 Jockey Made in America 250 at Road America

Who is in the Camping World Truck Series playoffs?

The field is fairly set this year. Four drivers have clinched playoff spots by winning and locking their way into the top 20: John Hunter Nemechek, Ben Rhodes, Todd Gilliland and Sheldon Creed. Austin Hill and Zane Smith have locked into the playoffs on points.

Matt Crafton and Stewart Friesen should be able to lock their way in after Friday’s (July 9) race at Knoxville Raceway, but it’s not official yet. Carson Hocevar is 52 points above the cut line and could get in after a good race.

Even the cutoff battle isn’t very close. Chandler Smith has a 31-point lead on Johnny Sauter for the final spot. Unless Hocevar and Smith have truly awful days these next two races or there is a surprise winner like Hailie Deegan on the dirt of Knoxville, these playoffs are pretty well set.

It’s frustrating that NASCAR has decided not to give Grant Enfinger a playoff waiver for missing the Daytona International Speedway road course. A system where he would have been better off getting arrested and having an excuse not to start that race is a very dumb system. I understand the rules are the rules, but the rules aren’t necessarily smart.

How good is Allen Bestwick?

This week marks 20 years since probably the most emotional win in NASCAR history, when Dale Earnhardt Jr. won the first Cup race back at Daytona since the death of his father.

I’m going to go in pretty deep on the Camping World SRX Series once it is over in a couple of weeks, but I don’t think the big breakout star is Ernie Francis Jr. Nor is it Doug Coby or potentially Luke Fenhaus.

No, it’s Allen Bestwick, who has put on a masterclass of announcing in these last four weeks, with three totally different partners with whom he has had to work.

A lot of people over the years have criticized Bestwick’s call of that 2001 July race at Daytona, the first produced by NBC in the national television contract era.  But it’s still his defining moment.

Sure, his voice cracked. Wouldn’t yours? Bestwick called that finish like a normal human would, not like somebody larger than life like Ken Squier/Mike Joy or a soundboard like Rick Allen/Leigh Diffey. And then it’s the little touches, like when Michael Waltrip gets on the car and Bestwick tells him to celebrate because he couldn’t do it after winning in February.

And now here we are 20 years later. Bestwick has come back after seven years away from the racing scene to serve as SRX’s lead announcer. And while there has been an occasional hiccup (referring to Brian Brown as the unrelated Brandon Brown), he’s been great. He knows how to react to things and when to throw some emotion in there.

Most importantly, the vibe of SRX is it being a fun exhibition series, and Bestwick has sounded like he’s having fun calling it without it sounding forced or like he’s not taking it seriously. And it’s really dumb that some day Joy is going to retire and instead of having Bestwick on the call for the Daytona 500 and the first half of the year, Adam Alexander and Clint Bowyer are going to giggle like school children for half of the race.

Is this it for Atlanta Motor Speedway as we know it?

There has been a lot of controversy this week over the new reconfiguration of Atlanta Motor Speedway, but regardless of that, this is planned to be the final race on the nearly 25-year-old pavement.

One of the oldest surfaces in NASCAR, Atlanta is basically a mile-and-a-half piece of sandpaper now. It’s to the point where a crew chief really needs to think about pitting if there’s a caution with just five or 10 laps on their tires.

Kyle Larson absolutely dominated the spring race before getting passed in the closing laps by Ryan Blaney. With how long of a dry spell he has had in the last month (by his standards this year, at least), it might be time for Larson to come back and win again.

That would be great – and sensible, but they don’t want to spend the time and money on it. They’d have to invest in more “trained” people, the communications and procedures to enable it to happen, track access issues to get equipment and people into those areas to “remove” cars w/o using the track itself… so many things and let’s face it – they love the full course caution. bunch the field and tons of commercials.. heaven for Daytona.

How about a rule for road course races only where if the caution comes out within 3 laps of the end of the stage, that becomes the end of the stage. Points are awarded accordingly and the stage pit cycle starts. The next stage will be a little longer but who cares. They could actually adopt this at all tracks but let’s just start with the road courses and see how it goes.

The stage racing has done nothing to add to the excitement of the racing. They are now just competition yellows that slow down the action. If you aren’t winning the stage, then second place and back just let it go and don’t actually race for it. Road courses should have local yellows like Indy/F1.

Bestwick has always been the top lead announcer in the sport. The combination of him, Dale Jarrett and Andy Petree hasn’t been equaled for fair, non fake drama induced commentating.

I’ve always liked Allen Bestwick’s announcing and have never understood why he isn’t the fixture in NASCAR that Mike Joy is. The man is a complete professional and does a superb job every race he calls.