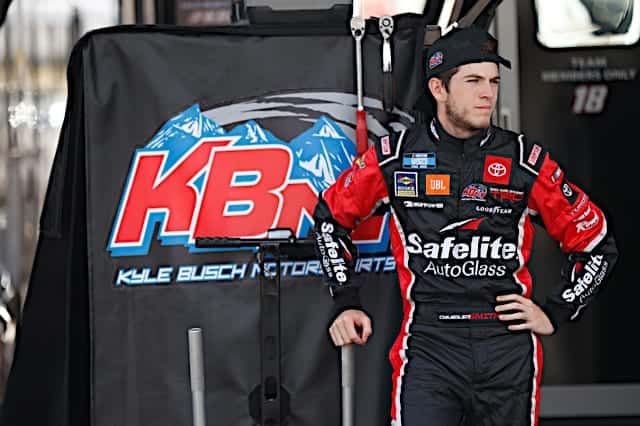 Matt Crafton, Derek Kraus, Donny Schatz and Hailie Deegan rounded out the top five. Schatz is making his series debut for David Gilliland Racing in the No. 17.

There were a few drivers who experienced issues in this practice session.

Morgan Alexander began his Truck career with damage to his No. 44 Niece Motorsports Chevrolet.

Damage to the No. 44 pic.twitter.com/PaNhKjU5ce

Todd Gilliland, who already has clinched a berth into the playoffs with his victory at Circuit of the Americas, suffered damage to his No. 38 Front Row Motorsports Ford.

Heavy damage to the No. 38 #FrontlineEnterprises Ford F-150 as @ToddGilliland_ gets into the wall at @knoxvilleraces.

Todd and the team are hard at work getting the truck repaired as practice continues. pic.twitter.com/lrczw7Vdwr

Points leader John Hunter Nemechek received the most damage though in this session. FOX Sports’ Bob Pockrass reported Kyle Busch Motorsports will use a backup truck for Nemechek.

Some drivers have gotten into the wall at @knoxvilleraces, but few as badly as @JHNemechek! pic.twitter.com/Sjos5iDmNh

The Corn Belt 150 will take place Friday, July 9, at 9 p.m. ET, with TV coverage provided by FOX Sports 1. Qualifying races will precede the event, though all will qualify due to 40 trucks being entered for the 40-truck field.