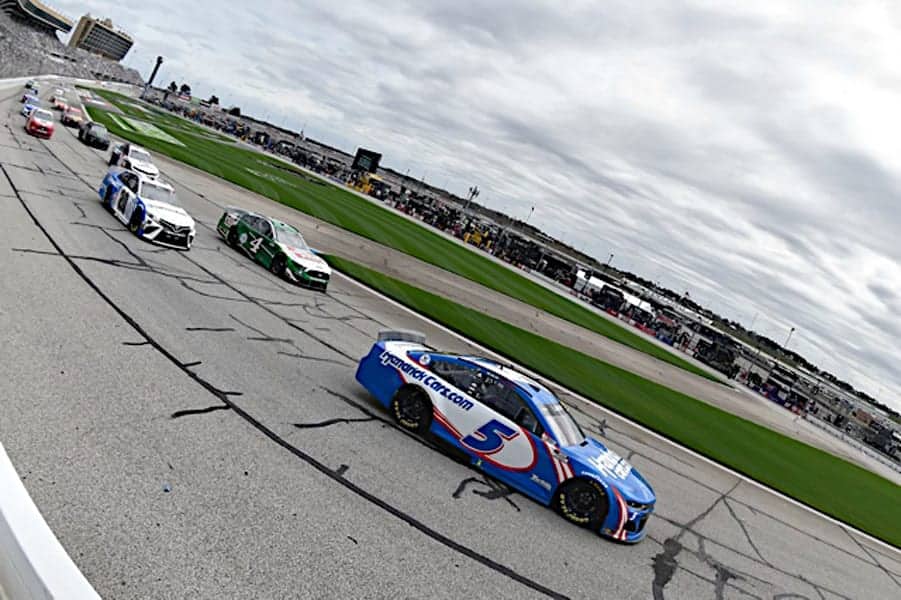 The NASCAR Cup Series returns to Atlanta Motor Speedway for the second time this season, the first year the racetrack has hosted two Cup events since 2010. Let’s get your daily fantasy NASCAR DraftKings rosters ready for the Quaker State 400, airing on Sunday, July 11 at 3:30 p.m. ET on NBC Sports Network.

Atlanta is an abrasive track that causes tires to wear down quickly, so a repave was inevitable. However, the speedway will do a bit more than that for next year’s races. In case you missed it, Atlanta announced that it will not only repave the track after this weekend’s events, but also add banking and narrow the racing surface. Sunday’s Cup race will be the final one on this configuration, which definitely affects daily fantasy next year. For now, let’s focus on this weekend and wait to see how the Next Gen car performs on 1.5-mile courses or tracks with higher banking.

At this point in the season, drivers have competed at five racetracks of this length as well as several abrasive ones, so we have a lot of data to filter through. Of course, past Atlanta events are still in play, but be sure to compare your findings with drivers’ current results the last few weeks. A combination of current momentum and intermediate track history should be how you set your roster for a race that’s known for long, green-flag runs with a small handful of drivers leading laps.

There’s no practice or qualifying this week and the lineup was set on Wednesday (July 7), putting last week’s Road America winner Chase Elliott on the pole. You can view the full lineup below.

Before I share my picks for Atlanta, I’ll review what happened at Road America.

Remember when I said that sometimes chasing position differential points helps you win your daily fantasy contests? Well, such was the case here. You needed to pick drivers who were starting in the back, like Elliott, Kyle Busch and Chase Briscoe. Elliott won the race after starting 34th, Busch went from last to third and Briscoe soared from 35th to sixth. Even having the race winner in this lineup didn’t help in that regard.

Thankfully, that strategy is not really in play this week (except for a few drivers under $8,000).

Many people chose those three drivers in their lineups, so there wasn’t a lot of disparity between NASCAR DraftKings users. In fact, 35 people tied for first in the $1 Happy Hour tournament. If you wanted to just profit a little bit in that contest, you needed to score 283.35. In the $1 double up, 363.85 fantasy points were needed to win $2.

Larson is the obvious favorite to win and dominate this weekend, as he’s one of the best on 1.5-milers this season. In the first trip to the Georgia track in March he clobbered the field, leading 269 laps and posting 104 fastest laps before Ryan Blaney got by him in the final 20 or so circuits. He still scored 160.05 fantasy points on NASCAR DraftKings and was in the perfect lineup per Linestar.

Plus, at Las Vegas Motor Speedway, Larson led 103 laps in his No. 5 Hendrick Motorsports Chevrolet en route to his first victory of the year. He was also super fast at Kansas Speedway, leading 132 circuits and notching 67 fastest laps. If the race didn’t have a late caution, Larson likely would have won; instead, he ran into Blaney on a restart and wound up 19th.

Then, at Charlotte Motor Speedway, Larson led all but 73 laps in the Coca-Cola 600 in another dominating performance.

Though Larson’s had some rough endings the last couple of weeks, at Road America and Pocono Raceway, he should still rebound and be out front once again at Atlanta.

Historically, Atlanta isn’t one of Byron’s best tracks, posting three results outside the top 15. However, he finished eighth there in March and won at Homestead-Miami Speedway earlier that month after leading 102 laps. He also was eighth at Las Vegas, taking the helm for 25 circuits and tacking on 31 fastest laps. Several races later at Kansas, Byron came home ninth and was the quickest driver for 17 circuits.

In fact (and maybe more importantly), the No. 24 pilot has been one of the most consistent drivers this year, earning 14 top 10s and ending up outside the top 10 just twice on an oval (or triangle). One was in the Daytona 500 and the other was at Pocono Raceway where he was leading in the closing laps before having to pit for gas. The other venues where Byron struggled were on road courses.

Since he’s starting 19th Sunday, Byron will earn some position differential points on NASCAR DraftKings if he can get a top 10. Look for Byron to be back to his usual 2021 self on this Georgia oval.

Dillon had a great result in the spring at Atlanta: he started 13th and finished sixth. Six fastest laps were added to his DraftKings score, boosting it up to 47.7 fantasy points. It was enough to place him in the perfect lineup that day. It was Dillon’s first top 10 at the 1.5-miler, though he came close a couple of times in 2016 and 2020. He also gained 11 positions in 2018 en route to a 14th-place finish.

Most notably, the No. 3 Richard Childress Racing driver has not ended worse than 12th at each 1.5-mile course so far this season. That’s quite the feat! His best finish at this track length was sixth in both the Coca-Cola 600 and Atlanta.

Since Dillon starts 13th once again, his speed and consistency on 1.5-milers is too good to ignore on NASCAR DraftKings.

Suarez has had a few good results at Atlanta; he was 15th in 2018, 10th in 2019 and 17th earlier this season after starting 25th. His DraftKings score in the latter was 38.3, which isn’t bad considering. However, you’ll likely need a little bit more from him this time around if you want to win your fantasy contests.

Since joining the new Trackhouse Racing team this season, Suarez has earned one top five (at the Bristol Motor Speedway dirt track) and three top 10s. He also has several finishes in the teens, like at Homestead (15th), Kansas (11th) or Charlotte (15th). He had transmission issues at Road America last week and was forced to retire early, so he’s starting further back in 27th this week. Based on where his No. 99 winds up at similar tracks, Suarez should produce a valuable score on NASCAR DraftKings.

I’m not sure why DraftKings paired Newman with such a low salary, but I’m here for it. He’s starting 29th Sunday and can score a lot of position differential points on NASCAR DraftKings if he comes close to his spring Atlanta result. Back then, he rolled off 28th and ended up 13th, even putting up a fastest lap.

Additionally, Newman brought the No. 6 Roush Fenway Racing car home in seventh at Homestead and was 16th at Kansas. The following week at Darlington Raceway, Newman moved up 10 spots to 10th place, while at Nashville Superspeedway he ran 13th after starting 29th.

Newman needs a good run, as Nashville was his only top 15 in the last eight races. Hopefully, he’ll keep his nose clean and get another 15th-place finish or higher.

OK, so maybe AMS isn’t the best racetrack to play McDowell, as his average finish there is very low. But really, with this roster, you only need him to do what he did in March: earn a 19th place or better finish. If McDowell can go from 25th into the teens (preferably 15th), he will easily meet his daily fantasy value. Besides, he gained 12 positions last season to end up 24th, which wasn’t bad considering.

McDowell already earned a top 10 on a 1.5-mile course earlier this year, a sixth place at Homestead. He also finished 13th at Kansas (though he only scored 20 fantasy points on DraftKings, since he started third). More recently, McDowell took the No. 34 Front Row Motorsports Ford to 19th or further at Nashville and both Pocono events. It would be great if he ended this weekend at Atlanta with another top-20 performance.

It’s amusing to see that those who bet actual money also went heavily for Larson at Atlanta, making him the biggest betting favorite of the season. With the low odds, many of them probably bet and lost a bundle on the P18 finisher. Like they say, “a fool and his money are soon parted.”