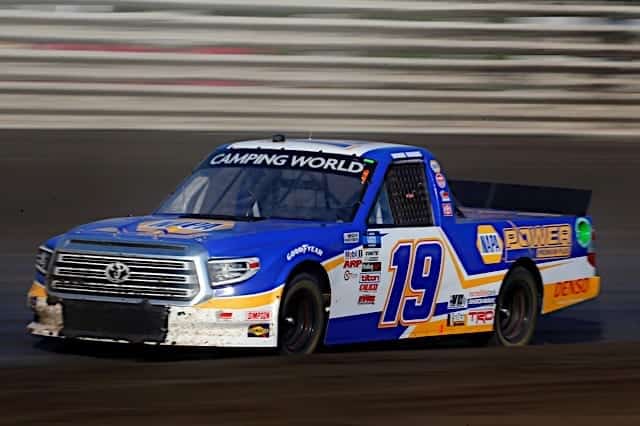 Tyler Ankrum, who won the third heat race, starts next to Kraus on the front row. Todd Gilliland and Hailie Deegan make up the second row, while Carson Hocevar rounds out the top five.

The first qualifying race went without any stoppages and Berry finished where he began his heat, earning 10 points. Deegan earned the most points in race one with 13.

The second race had an unusual moment: the red flag was brought out after the white flag was accidentally shown with five laps remaining. The restart affected polesitter Zane Smith, as Strickler was able to get around him to win the second event and earn 11 points. Gilliland grabbed 13 points in this race to tie with Deegan.

Both John Hunter Nemechek and Chris Windom had to drop to the rear in qualifying race three, with Nemechek deciding to drop out early since he’d have to start at the back of the main regardless. Nemechek wrecked his No. 4 Kyle Busch Motorsports truck in practice Thursday, while Windom hopped in the No. 02 for Michael Annett.

Ankrum won qualifying race three but Kraus earned the most points (17) during this run. Ankrum grabbed 14 points with his win after moving up four positions from the start.

Lastly, in the fourth qualifying race, Hocevar got by Brett Moffitt from the drop of the green flag and stayed out front to score 11 points. Chase Briscoe was second and Moffitt took third.

Do the fans really want all this POINTS POINTS POINTS?. It’s coming out of my ears. I’m so sick if it. It means nothing to me. Enough is much more than enough. Just Freekin race!