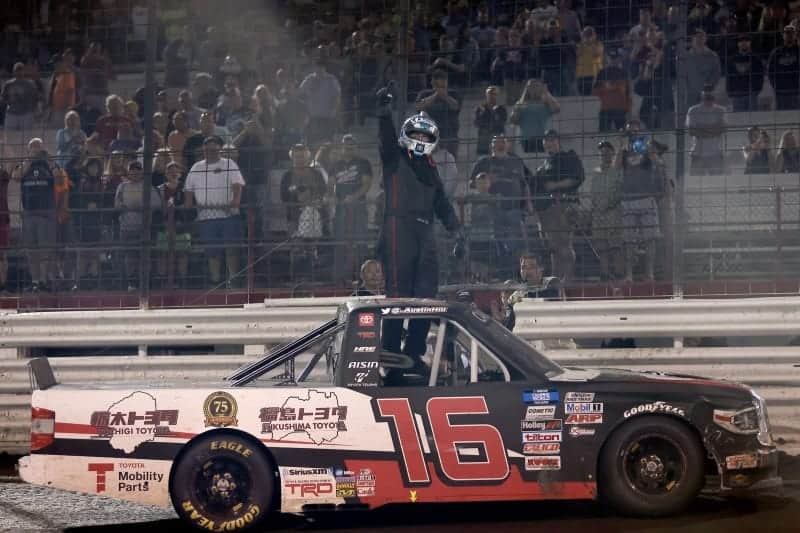 Hill took the lead from Chandler Smith just before a caution came out during overtime and shot out to the lead in the final overtime finish to take his first victory of the season.

“Kind of thought we were out of it for a little bit there at that restart on the outside of the 38, and earlier in the race I fell back all the way to like 20th,” Hill told Fox Sports after the race. “I didn’t think we were going to make it back. Track position was huge, it was really hard to get around people. I had to kind of rough them up a little bit to get around them. I just kept my head down.

“This team right here, everybody at [Hattori Racing Enterprises], they never quit. That’s the thing I love about this group is we don’t stop, we don’t quit. Even when we think we’re down and out, we just keep coming back. If you would have told me we would have won at a dirt race this year, I would have told you you were lying.

“This is awesome, this is so awesome.”

The win secured a spot for Hill in the playoffs. According to Fox Sports, Zane Smith and Matt Crafton also locked themselves into the playoffs on points. Stewart Friesen, Carson Hocevar and Chandler Smith are currently above the playoff cutline.

The race was filled with spins, wrecks and huge crashes.

The first caution flag flew around lap 17 for a spun Johnny Sauter; he received some rear end damage from Chase Briscoe, who eventually turned the No. 13 truck after several bumps.

The trucks went back to green after a few laps but returned to yellow flag conditions when Brown turned around in his No. 51 Kyle Busch Motorsports truck. Parker Price-Miller went over the brim of the apron trying to get by Brown.

Jessica Friesen got some left-front damage and spun shortly after the next restart; Fox Sports reported that she was stuck in second gear. Since it was so close to the end of stage one, the final three laps were run under caution. Derek Kraus got by Carson Hocevar and Todd Gilliland just before the yellow flag flew. He won stage one as a result.

While much of the field came down pit road for controlled stops, Donny Schatz decided to stay out. Unfortunately he got caught in the middle lane on older tires on the ensuing restart and lost several positions. Gilliland shot back out into the lead, while Josh Berry moved up into second place around lap 45.

A big wreck happened with about 25 laps left in stage two. Kraus put the bumper on Jessica Friesen, spinning her around. As other trucks were checking up on the bottom, it looked like someone ran into Morgan Alexander, spinning him around and into Friesen. Alexander’s truck was too damaged to continue racing and his night was done.

Jessica Friesen goes for a spin with some help from Derek Kraus and Morgan Alexander runs into her.#NASCARonFS1 | @NASCAR_Trucks https://t.co/YXgTDs7adS pic.twitter.com/j3RTZQBD2c

Kraus continued to move through the field and passed Gilliland just before another caution came out for Brown. The No. 51, which had some smoke coming out of the right front tire area, spun around with about four laps left in stage two. Once again, Kraus earned his second stage win of the night under yellow flag conditions.

Most trucks decided to pit, but this time Sheldon Creed and Chandler Smith stayed on the racetrack. When the race went back to green with about 60 to go, Creed got out of shape after some contact with Kraus and dropped back. But soon after the yellow flag flew once again for Jack Wood and Price-Miller. Their damages were too severe, especially for Wood’s truck as smoke billowed out.

Hocevar and Chandler Smith swapped the lead when the race went back to green with 50 to go. However, Ben Rhodes wanted to take away a position from Kraus and rubbed the No. 19’s left rear tire. A metal piece from the No. 99’s front bumper stuck out as a result of the contact and Kraus spun out due to the flat tire.

NASCAR ended up black-flagging Rhodes to repair the bumper after the race went back to green. Shortly thereafter, though, another yellow flag came out for Stewart Friesen and Ryan Truex. Rhodes’ crew chief spoke to Fox Sports during this caution period about his frustrations.

Rhodes crew chief tells Jamie Little that they weren't told they had to pit under yellow for the damage but then told under green they had to pit to remove the piece from the grille.

Things started heating up as the laps came to a close as trucks fought for every position they could grab. Brett Moffitt had worked his way up to the front but suffered a flat tire after contact with another vehicle. He couldn’t control his truck and ran into the wall.

See also
4 Burning Questions: What to Do With Road Courses?

The race restarted once again with five circuits remaining around the half-mile dirt track, but didn’t last very long as another large wreck happened. John Hunter Nemechek spun around in front of several trucks, and Creed, Jett Noland and Hailie Deegan all got caught up together trying to avoid Nemechek.

OVERTIME after a @NASCAR_Trucks pileup with just four laps to go at @knoxvilleraces!

With more restarts come more desperation to get as many positions as possible. The first overtime start immediately saw a massive pileup of trucks all running into each other. Briscoe, Creed, Noland, Berry and Schatz were just a few of the drivers caught up in a parking lot. The red flag came out to help clean up the track.

The 13th caution came out when Austin Wayne Self spun around and slammed the wall along with Kyle Strickler. Kraus bumped Strickler from behind on the bottom line, which sent Strickler sideways and into Self.

Once NASCAR got the field sorted out, it attempted to return to green once again. Unfortunately, it didn’t stay that way as Stewart Friesen got turned off of Tyler Ankrum’s bumper, sending him into the outside wall. Sauter also came around sideways into Friesen’s No. 52.

The race finally went back to green and stayed that way through the end, though Hocevar ended up getting spun and wrecked with another truck.

It was all smiles and happiness for Hill, though, who celebrated both on the frontstretch and in victory lane.

The Trucks have three weeks off before its final race of the regular season at Watkins Glen International. The event is set to air on Saturday, Aug. 7 at 12:30 p.m. ET and will air on Fox Sports 1 and the Motor Racing Network.

Hopefully the last truck race ever at Knoxville. What a complete sh*tshow.