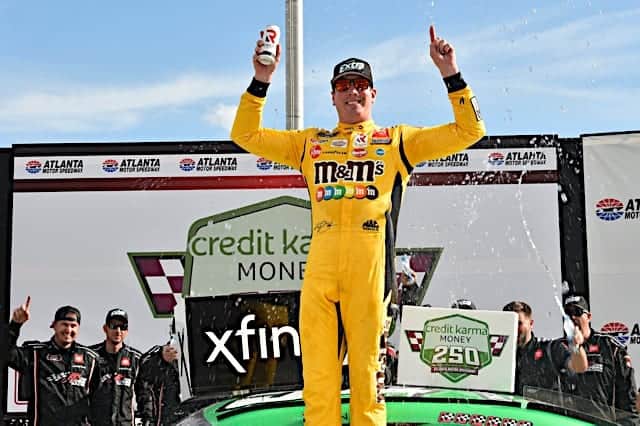 Kyle Busch took the win in the Credit Karma Money 250 at Atlanta Motor Speedway on Saturday (July 10) in the final planned NASCAR Xfinity Series start of his career.

After claiming the first two stages, Busch looked to be in control until stage three. His Joe Gibbs Racing teammate Daniel Hemric took command and looked set for a sure victory as he pulled away.

But late-race cautions — and one unfortunate restart with seven laps remaining — took the sure win away.

With Hemric on the inside of the front row, Busch chose to start behind his teammate from third place. Once green, Busch pushed Hemric in a failed attempt to help, but it instead got the No. 18 Toyota loose, up the track and into the wall to bring out another yellow flag.

Setting up overtime, Busch had one brief challenge from Jeb Burton for the win, but eventually sealed it and pulled away. Busch went on to describe the win as “somber” and said it was not the way he wanted to complete his perfect 5-for-5 sweep this season and to cap off his Xfinity career.

Austin Dillon, who subbed for the injured Michael Annett, came home just outside the top 10 in the 11th position. C.J. McLaughlin was suffering from heat exhaustion during the event and was replaced by David Starr to finish the race; Starr had been involved in an earlier incident and was available to drive. McLaughlin was seen and released by the infield care center.

No such thing as a sure win until you take the checkered flag.

Sounds like Baby Busch realized it was fourth down and decided to punt.

Anybody other than the asshat in the 9 is fine with me.