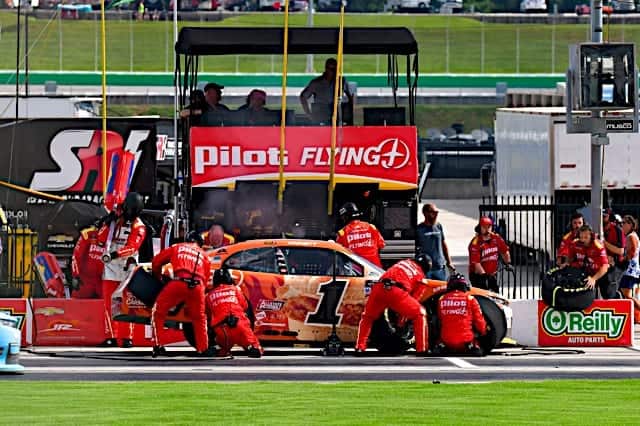 Traveling to Atlanta with his grandfather ended up being a good thing for both Austin Dillon and JR Motorsports on Saturday (July 10).

In Atlanta earlier than planned, Dillon was at Atlanta Motor Speedway on Saturday with Richard Childress. At the same time, JR Motorsports was in search of a driver for its No. 1 car since Michael Annett was sidelined with a leg injury.

Dillon ended up getting a very last-minute call to jump in the car.

How last-minute was the decision for Dillon? During the television broadcast, he was heard asking who his crew chief and spotter were.

It all started when Austin Craven, Business Director of Team Dillon, learned via text message that Annett would not be in the car, according to Dillon.

That quickly got the ball rolling. Within moments, Dillon’s day went from a relaxing afternoon to his first race on a 1.5-mile track in the NASCAR Xfinity Series since 2015. A phone call to JR Motorsports owner Dale Earnhardt Jr. was involved.

Agreeing to drive was one thing. The logistics came next, starting with commandeering a golf cart to transport Dillon.

“So, I stole a golf cart from a TV compound, I drove it to my bus, put my Bass Pro [Shops] firesuit on, and once I got it on, I needed a helmet,” Dillon said. “Craven ran and got that from outside the track in our trailer. The hybrid [helmet] was Annett’s, which was pretty big for me. We tightened it as much as we could and sat in the car.”

The challenges didn’t end there for Dillon, who also had help from JR Motorsports driver Justin Allgaier getting quickly acclimated to the car.

See also
Kyle Busch Gets Xfinity Win No. 102 at Atlanta

“The gas pedal, my foot was stretched completely out to get wide open,” Dillon said. “The brake pedal, I could barely touch it, which is a good thing, You don’t want to be touching brakes … much, anyway.”

Dillon made his way into the top 10 early on and found himself consistently in the top five in the final stage, at least before tire wear became a factor. He finished 11th.

“It was a lot of fun, I’ve got to thank JR Motorsports,” Dillon said. “The car was solid. I was probably a little bit tentative. If I would have hit the wall, it probably wouldn’t have been real fun. I was a little loose in the seat. It was fun, I had a blast.”