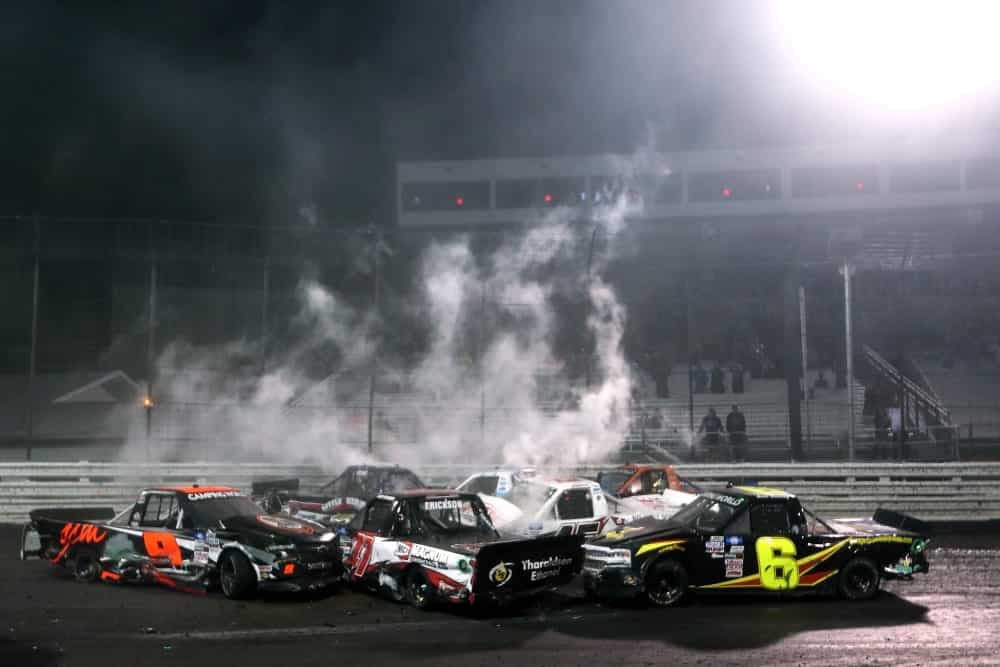 In a Nutshell: Nearly three hours after the Corn Belt 150 took the green flag and nearly five hours after the qualifying heats began, the NASCAR Camping World Truck Series’ debut on the Knoxville Raceway dirt finally took the checkered. Austin Hill snared his first victory of the season after being a non-factor for much of the race, surviving caution after caution and crash after crash to escape with the lead and win on the fourth overtime restart.

That just one ringer earned a top 10 was largely due to accidents marring much of the race’s running time, primarily on the late restarts: a 2021 Darlington-esque pileup ensued on one of the overtime sprints, sending a number of trucks to the garage and damaging a host of others.

?: We just know a lot of trucks were involved in this #NASCAROvertime pileup. ?#CornBelt150 | @knoxvilleraces pic.twitter.com/EEC4w2TfOf

Seven drivers led for a total of 21 different stints. Johnny Sauter had a solid start to his night, taking the lead from Kraus within the first three laps, but a perturbed Chase Briscoe sent the No. 13 for a spin.

Despite starting on pole, Kraus led just 10 circuits. Hill was out front for 11, Smith led 71 and Gilliland led the way for 61.

Smith was visibly irked after coming up just short of his first victory in a truck. The KBM driver seemed to believe that he was ahead of Hill when the final caution flew prior to the last restart, where Hill rolled off on point and was able to keep Smith at bay.

The No. 18 has had a respectable 2021, with four top-10 finishes, but trailed Carson Hocevar by 21 points heading into Knoxville. Even with Hocevar getting past Stewart Friesen for ninth in the standings, Smith gained on Friesen for the final playoff spot.

A few other drivers contended at points throughout the night: Hocevar ran well late and battled back and forth with Smith several times for the lead before spinning late, while Kraus swept the stages after starting on the pole. Kraus’ shot mostly went out the window due to aggressive driving that earned him the chrome horns of several fellow drivers, including getting spun out twice after the checkered flew.

Remember that February race at the Daytona International Speedway road course that seemed to last forever? That seems like a distant memory now because of Friday night: it felt longer because of the constant yellows, running nearly two-and-a-half hours, but was still 19 minutes shorter than Daytona. A total of 14 cautions flew over the course of 179 laps (every 12.8 laps, on average) in a race that was supposed to be 150 circuits.

The average speed of the race was 36.8 mph, 44.7% of the race was run under caution, a whopping 29 of the 40 trucks entered were involved in crashes and a dozen of those were collected in more than one incident.

OVERTIME after a @NASCAR_Trucks pileup with just four laps to go at @knoxvilleraces!

The lap 148 yellow carried the race past its scheduled 150-lap distance, but three more flew in overtime. The final lap featured a double spin on the backstretch, where Nemechek and Hocevar essentially both did full 360-degree spins in tandem and kept chugging to the checkered.

Check out this double-360 moment from the final lap last night at Knoxville Raceway. pic.twitter.com/NRwOQ5i6Ri

It’s also worth noting that Enfinger’s third-place effort continues a very strong season for the Alabama native. Despite nearly winning the 2020 championship, Enfinger was relegated to part-time with ThorSport Racing, finding a second home with CR7 Motorsports: he’s missed just one race total this year and has five top-five finishes, eight top-10 efforts and an average finish of 9.8. He sits tied for seventh in the standings, good for a playoff berth if he was eligible.

See also
Fire on Fridays: 9 Other NASCAR Tracks That Need Repave or Reconfiguration

Point Report: The gap between first and second is still sizable, with Ben Rhodes only closing up one point to John Hunter Nemechek. The No. 99 now sits 85 points behind the No. 4. Nemechek, meanwhile, clinched the regular-season championship and continues to roll his way into the playoffs.

Behind them, the top five held steady, while Matt Crafton jumped to sixth over Sheldon Creed with a top-10 run. Hocevar leapfrogged Friesen after the latter had a rough night in Iowa, putting the No. 42 solidly in the playoffs while Friesen sits just 13 points ahead of Smith for the final postseason spot. Kraus’ run also landed him a +3 in the standings between Pocono Raceway and Knoxville, boosting him up to 12th.

Additionally, Hill’s win vaulted him with 100 points of the Nemechek/Rhodes battle.

Tonight was rough to say the least. I didn’t have the speed that I wanted and I have work to do. So many good trucks got tore up tonight and it’s never fun as a competitor to see that. Time to go to work and get ready for @WGI @GMSRacingLLC

Can’t thank this whole team enough. We had a truck fast enough for a top 5 but got wrecked middle of stage 2. Battery got disconnected causing us to lose crucial laps. Had a great time and met some awesome people! https://t.co/NBzCBwC9C5

Your right Wayne. “Speed costs money, how fast do ya wanna go.” But there was a level of respect to compete on a national touring series, that seems to have disappeared these days. https://t.co/Kk6dmhKwlV

Talking with @DonnySchatz after his night ends in a late @NASCAR_Trucks pileup at Knoxville Raceway. pic.twitter.com/GjeNnw7tXc

Up Next: Knoxville was the series’ only scheduled race for July, with the truckers taking an extended break alongside the Cup and Xfinity Series for the Tokyo Olympics from late July to early August. Four weeks from now, on Saturday, Aug. 7, they’ll return for the final race of the regular season at Watkins Glen International, a venue the Truck Series hasn’t been to since 2000. The winner of that event? Greg Biffle.

The worst truck race I’ve ever seen. The definition of a cluster*#k.

Last edited 11 months ago by Christopher
2
0

Perfect description, I agree with you.

Absolutely unwatchable. Eldora was way better. Columbus, Mississippi would be even better than that.

I didn’t make it through the heat races. Just couldn’t find it interesting.
There is a reason that as many people, and tracks, as could abandoned dirt racing.

NA$CAR results list 14 cautions for 80 laps. But since NA$CAR doesn’t count the first lap of a caution period it means there were 80 plus 14 or 94 laps of caution in a 179 lap event.

Just proof that dirt racing sucks and has nothing to with driver skill.

You’ve never seen the Outlaw Late Models live or the NDRA or Big Block Modifieds or Outlaw Sprints. Watching Baby Busch beat up the little guys must suck too for non-members of the Baby Busch fan club. You’ve never been to a short track, paved or dirt.

Yeah, actually the first races I ever saw were on local short tracks. So go shove your lies where the sun don’t shine. Maybe someday you’ll get to use indoor plumbing.

Absolutely right. Been to Speedweek at Volusia 2 years in a row. Sprint Cars put on amazingly exciting racing. Having exposed wheels forces respect. Jobe you comment w/o knowledge.

I have more sophisticated tastes than rednecks like you.

You comment without knowledge of the best in motor racing, which isn’t found in the dirt. The best open wheel racers are not on dirt and certainly not in trailer park country,

So much vitriol from all sides on this site. Takes the fun out of the comments section.