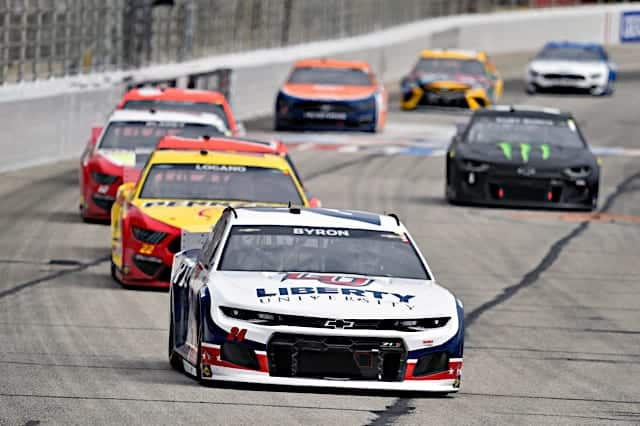 The NASCAR Cup Series bounces back south for its second 2021 tango with Atlanta Motor Speedway for the Quaker State 400. Sunday (July 11) afternoon’s race will mark the final appearance for NASCAR’s premier series on the current surface before extensive reconfiguring and remodeling begins in the Peach State.

Nevertheless, it’ll be Ryan Blaney looking to defend his spring race triumph at the 1.54-mile quad-oval, while the runner-up in that race, Kyle Larson, seeks to return to his winning ways after a few weeks without a victory.

Truex, though, will drop to the rear of the field in his No. 19 for the green flag. The car failed inspection twice, the first time for deck lid height issues and the second for tail compliance problems. That relegation bumps Larson into the fifth starting spot, while Briscoe jumps into 10th.

Truex car has failed tech twice and he will drop to the rear today. Appears to be the only car in the garage that still needs to get through tech. pic.twitter.com/1AQCqVciC7

Truex issue was deck lid too high on first time and then when fixed that, tail was out of compliance. Team going through on third try now. Will have to drop to the rear.

With a chance of rain just north of 50% in the afternoon, it’s entirely possible that AMS will be less of its normal Hotlanta self and more like Atlantis on Sunday.

Six current drivers have previous wins at Atlanta, the earliest amongst them being Kevin Harvick‘s 2001 victory after Dale Earnhardt’s death. Harvick, Blaney, Hamlin, Kyle Busch, Kurt Busch and Brad Keselowski make up the class of previous winners there, and Harvick and Busch both have a trio of wins at the track.

Austin Hill survived nonstop late-race carnage to win the Camping World Truck Series’ debut on the dirt at Knoxville Raceway on Friday (July 9) night, while Busch netted his 102nd Xfinity Series trophy on a Saturday where the track temperature at Atlanta soared to nearly 140 degrees.

IndyCar and Formula 1 are both off for the week, while this is the penultimate race for the Cup Series before they take a couple weeks’ hiatus after New Hampshire Motor Speedway due to NBC’s coverage of the postponed 2020 Tokyo Summer Olympics. Both the Xfinity and Truck series will also take a break.

Tune in for the last race on Atlanta’s current surface at 3:30 p.m. ET with coverage on NBC Sports Network.