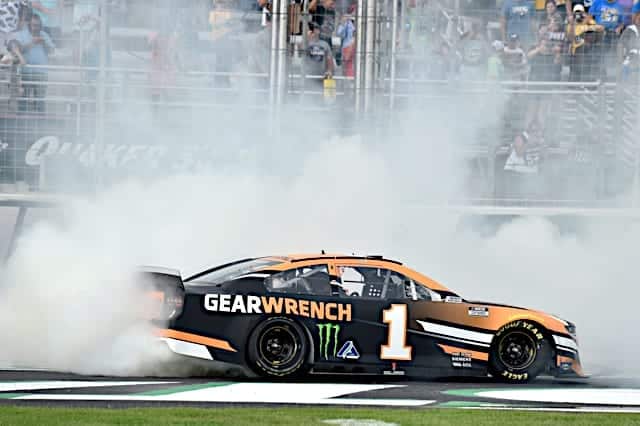 Intermittent rain, a hole in the track and a ferocious battle with his younger brother weren’t enough to keep Kurt Busch from victory lane at Atlanta Motor Speedway, as he drove his No. 1 Chip Ganassi Racing Chevrolet to a win in the Quaker State 400 on Sunday (July 11).

After track repairs on deteriorated pavement in the frontstretch asphalt were completed, the Busch brothers waged a back-and-forth battle over nearly 100 green-flag laps all the way to the end, swapping the lead several times. Kyle Busch won the first stage, Kurt the second and dueled all the way to the checkered.

“Hell yeah, we beat Kyle!” Busch said of the family affair during his post-race interview. “I taught that kid everything he knows. He should be grateful. What a battle. What a genuine, awesome, old-school racetrack. I just asked the track today, ‘last time here on your old asphalt, can I have an old guy win?’ And she answered. So thank you, Atlanta Motor Speedway!”

It was Kurt’s fourth overall victory at Atlanta and first since 2010, as well as a night-and-day difference between his two races there this year: Busch finished dead last after a crash there in March of 2021.

Road America winner Chase Elliott started on the pole with Kyle Busch alongside him, the latter looking to sweep the Peach State weekend after scoring his 102nd Xfinity Series triumph on Saturday (July 10).

Elliott jumped out to an advantage before his competitors’ cars started coming to them. Busch especially picked up the pace, passing Elliott for the lead and heading up the field through the lap 25 competition caution. Joe Gibbs Racing teammate Denny Hamlin grabbed the top spot after pit stops.

Contending at this point was Tyler Reddick, up to third, but a caution froze the field when four-wide racing sent Cody Ware around. Also spinning into the inside wall were the cars of Daniel Suarez and Ricky Stenhouse Jr., while Anthony Alfredo dirt-tracked his No. 38 around the spinning cars and weaved his way to safety.

Kyle Busch secured the stage one victory, followed by brother Kurt. The No. 1 had carved his way into the top 10, top five and eventually up to the runner-up slot … and grabbed the lead when he got by his younger brother on pit road. Kurt Busch also commanded the field for the start of stage 2 and took off.

The threat of rain, and even a few sprinkles in the vicinity of the racetrack, loomed around the halfway point of stage two as green-flag pit stops began. Cole Custer, Aric Almirola and Ryan Preece stayed out as long as they could, Almirola and Preece through halfway at lap 130, but all ended up pitting (and, in any case, the No. 1 was fast enough out front that he caught them himself).

Almirola: "It's raining a lot."

By the time stops had cycled around completely, Busch still led and the rain began to clear up, with some sunlight beginning to slice through the heavy cloud cover. Kyle Larson made his way into the top five by lap 154, while the elder Busch scored the stage two victory.

Then the track decided to break apart.

A large chunk of the frontstretch disintegrated, leaving a sizable pothole in the racing surface, eliciting a red flag and on-track repair operations.

The red flag will be displayed for track repairs at @AMSUpdates. #NASCAR pic.twitter.com/UXBoKE9PBV

After a delay of about 20 minutes, drivers re-fired their engines and readied for the final stage of the afternoon. NASCAR asked the drivers to avoid the area on pace laps, parking a safety truck near it.

Restarting with about 90 circuits remaining, Kurt Busch again took off, holding a nearly 1.5-second advantage over Kyle with 60 laps to go. Following them were the Hendrick Motorsports Chevrolets of Bowman (third) and Larson (fourth), while Reddick rounded out the top five.

Behind the leaders, Bubba Wallace, Matt DiBenedetto and Chase Briscoe were all putting together solid runs in the top 15.

The final round of green-flag stops swapped the brothers: Kyle pitted half a lap earlier, allowing him to scoot out of the pits just ahead of Kurt. The younger brother held a sizable lead for a spell in stage three before Kurt started reeling him in as they navigated through lapped traffic, cutting the deficit to less than a second with less than 40 laps left.

That turned into a battle for the lead and Kurt eventually secured the lead with 24 laps to go: his Chip Ganassi Racing teammate Ross Chastain was running the high line, the same that Kyle was, and slightly held up the No. 18. This allowed Kurt to dive underneath and pull up alongside his brother and the two battled side-by-side for more than half a lap, with the No. 1 slamming the door shut going into turn 3.

What a battle!@KurtBusch passes his brother for the lead! TV: NBCSN // #NASCAR pic.twitter.com/wlBDnF5itJ

As much as lapped traffic helped Kurt pass his brother, it then helped the other way around: the No. 18 started to close back up on the No. 1, closing to within half a second with nine laps left.

Kyle kept cutting the gap ever so slightly, drawing alongside with seven to go, but Kurt then cleared him again and pulled away by half a second. The elder brother was mostly running the middle groove in turns 1 and 2 and the low side in 3 and 4, while Kyle ran high in both.

This time, lapped traffic wasn’t an issue: Kurt cleared lapped traffic and then pulled away to a full second’s worth of an advantage, cruising to the 33rd victory of his career and tying Fireball Roberts on the all-time victories list.

at the end of the day, it's all about FAMILY pic.twitter.com/MnI4ZtbPpO

“Shake and bake!” Busch added in regards to teammate Chastain contributing to the win. “Yeah, man, the [No.] 42. He did his job as a teammate, Ross is gonna get a little flak for it, but that’s what it takes to be a good teammate at the right moments. I couldn’t be more proud of Ross Chastain. I’ll pay him back eventually but right now this is our No. 1 car in victory lane.

“It’s wonderful. For all of Ganassi, [Team] Trackhouse bought our team, I don’t know where I’m going, but I just love racing cars and I want to race that Next Gen car. That’s why I’m trying to stick around. Will you guys have me next year if I stick around?”

Busch addressed the question to the crowd in the stands, who responded with a roar.

Next week marks the Cup Series’ final race before their two-week hiatus for NBC’s coverage of the postponed 2020 Tokyo Summer Olympics. Following their conclusion, Cup action returns on Sunday, Aug. 8 with the Go Bowling at the Glen. Coverage is set for 3 p.m. ET on NBC Sports Network.

Way to go Kurt. It’s good to see a old vet back in victory lane.

On the other hand jaws 2.0 Wallace let the big boss man down again. He had plenty of chances to get a top 10 He had good speed and descent pit stops but he just can’t hang with the big boys. I hear the truck series is looking for rookie drivers.

A feel good win by Kurt imo. I’m happy for him, his team, and Chip. It was exciting to watch the brothers battle side by side. The Busch brothers took the last two victories at Atlanta on this pavement and configuration.