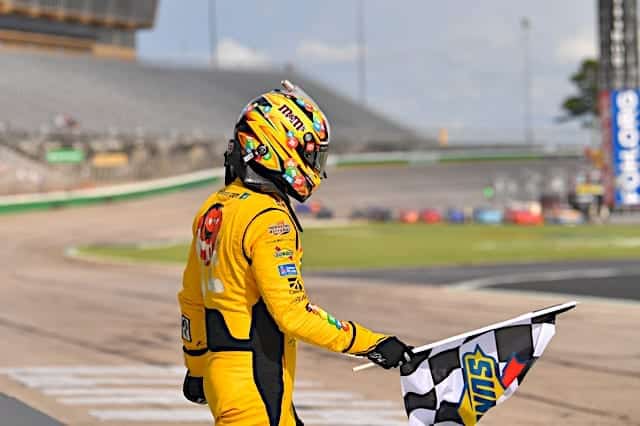 His NASCAR Xfinity Series career began on May 24, 2003, at Charlotte Motor Speedway. His first victory was at Richmond Raceway on May 14, 2004. But was Kyle Busch’s 102nd victory in his 362nd career start the final time the 2009 Xfinity Series champion competes in NASCAR’s second-tier division? According to Busch, that very well might be the case.

Unfortunately, the celebration will be more muted than other victories that came before. It showed as Busch did not bow after he took the checkered flag from the NASCAR official in Saturday’s (July 10) Credit Karma Money 250 at Atlanta Motor Speedway.

Busch lined up on the inside lane right behind teammate Daniel Hemric, who was the leader. Busch nudged Hemric’s back bumper on the restart, looking to boost him to the lead. Instead, as they traveled over the bumps entering turn one, the nudge upset Hemric’s car. Hemric slid up the track, clipping the left front of A.J. Allmendinger’s car, and crashed into the outside wall.

Busch was the control car for the final restart and held off Jeb Burton in a two-lap shootout. Before a series of late cautions, Hemric was leading Busch. What looked to be the breakthrough victory for Hemric turned into a 30th-place finish. Burton finished second, followed by Noah Gragson in third, Justin Haley fourth and Ty Dillon in fifth.

Not only did Our Motorsports have a night-and-day difference in results at Atlanta on Saturday compared to the first trip back in March, but it was also the best day for the organization in 2021.

Ty Dillon, driving the No. 23, finished fifth, and full-time driver Brett Moffitt finished sixth. The team has scored top-fives and top-10s this season with both cars, but never in the same race. As a bonus, the duo ran inside the top 10 for most of the race on pure speed – not luck.

Despite all the tire strategy at the end and the three restarts within the final 20 laps, Ty Dillon and Moffitt had opportunities to win and could have if it weren’t for an extra caution or two.

Our Motorsports has had speed yet struggled to earn the finishes they deserved, but on Saturday, they did. Moffitt switched his championship declaration from the Camping World Truck Series to the Xfinity Series in April but is still 210 points behind 12th-place Jeremy Clements. It will likely take a victory in one of the seven remaining regular-season races for Moffitt to earn a spot. Saturday will serve as a confidence booster for himself and the Our Motorsports team.

Riley Herbst did not bring his Stewart-Haas Racing Ford Mustang down for a fresh set of tires during the competition caution on lap 21. The surface of Atlanta eats up rubber, and lap times drop every single circuit. If he had pitted, he would have started in the back, but he would have driven to the front with the opportunity for 15 or so laps of green-flag racing.

He finished 18th in stage one, missing out on critical stage points and track position. Stage two was no better, as Herbst ended up 20th and ultimately finished the race in 19th. The team only earned the 18 points that 19th-place pays out. The team entered 43 ticks behind 12th-place Jeremy Clements in the points standings.

Despite not earning any stage points, Clements had a stellar day. He was often in the top 10 and finished eighth, which grew his lead over the cutoff line to 54 points, now over Herbst. Brandon Brown entered 13th in the standings, 33 behind Clements, which means all Herbst was able to accomplish was jumping from 14th to 13th in points.

Had the decision been made to pit during the competition caution, Herbst could have scored stage points, maybe even a stage victory, and better yet, gain valuable track position.

It was Hemric’s race to lose with 18 laps to go. Busch was struggling to control his car through the corners and allowed Hemric to maintain about an eight-tenths of a second gap to him. With 17 laps to go, the whole game changed.

Hemric had to pit for scuffs, as did many others, while others came down for their last set of fresh tires. Kyle Weatherman stayed out and became the leader of the race and controlled the restart. He chose the outside lane, giving Hemric a clear path to the lead entering turn one.

Weatherman then had a mechanical error and was unable to shift. Many cars passed him before Brown and Harrison Burton ran into him, bringing out the caution yet again. On the next restart with six laps to go, teammate Busch gave Hemric the bump into turn one that led to Hemric’s crash. Watching a driver have a victory taken away in a series of events like that is hard to watch, but when a teammate lands the knockout punch and that teammate goes on to win, that is ugly at its finest…even if the teammate didn’t mean to.

While late-race cautions can ruin a driver’s day, such as Hemric, it can be a blessing for others. With 25 laps to go, Ryan Vargas was running 24th in his No. 6 JD Motorsports Chevrolet. The late-race cautions helped him progress up the leaderboard to as high as 12th, with an ultimate finish of 14th.

That is a season-best for Vargas and his third-best career finish. One can feel Vargas’ excitement through his post-race tweet and know that today’s finish means a great deal to him.

P14 With 20+ (!!!!!!) lap older tires than the field! Thank you MaintenX and Monarch Roofing for believing in me and supporting the little team that could.

Busch’s victory in Saturday’s Credit Karma Money 250 means he goes five-for-five in 2021, winning every attempt in a quintet of starts (Circuit of the Americas, Texas, Nashville Superspeedway, Road America, Atlanta). Busch had the strongest car in the first two stages of the race and may have laid back to preserve his equipment. He lost a bit of his edge in the third and final stage, but ultimately walked away with the win.

Austin Dillon was the surprise interloper of Saturday’s race. Less than half an hour before the start of the race, he received a call from JR Motorsports to drive the No. 1 Chevrolet in place of Michael Annett. Annett was battling a leg injury, and it was determined that he would not race.

Dillon was available and jumped in the car. He started at the rear but finished 10th in stages 1 and 2. Dillon continued to battle for top-10 positions in the third and final stage but was shuffled back after restarting sixth on the final restart. He finished 11th — impressive for never stepping foot in a JRM Chevrolet before.

“I meant to push him (Hemric). I wanted to hit him. I just wanted to hit him forward and straight. But [I] turned him sideways a little bit, and then I think he got more help on his right side. I was just trying to help a teammate there. That’s why I restarted behind him.” – Kyle Busch

Was Saturday the final career NASCAR Xfinity Series start for Kyle Busch? Before the race, he posted a picture on Instagram of him glancing out of an airplane window with the caption “Big day today. Thinking back on over 100 wins n the #XfinitySeries. Let’s go out w uno mas.”

NBC’s Marty Snider asked Busch after the race if it was indeed his last race. Busch replied to his knowledge that it was his final race but noted, “never say never.”

Personally, I hope that it is not the final time Busch climbs behind the wheel of an Xfinity Series car. From 2008 to 2016, Busch won 75 of his 102 career victories, including the 2009 championship. That level of dominance has rarely been replicated in sports, and it was controversial for fans. Busch is one of the best race car drivers in motorsports history, and, like many dominating athletes and sports teams, their dominance isn’t appreciated until they’re gone, or their talents waned. Just look at Jimmie Johnson and his final three years in the Cup Series.

When Busch steps down into the Xfinity Series or Camping World Truck Series, for that matter, it’s an opportunity for young and inexperienced drivers and their teams to see how they stack up against one of the best ever to drive.

As it stands, drivers declared for Cup Series points with three or more seasons are limited to five starts in the Xfinity Series per season. I hope that Kyle Busch has a change of heart and decides to come back in 2022 for a shot at five more victories. Even the Xfinity Series regulars say they appreciate it when he races in the series because they want to test themselves against the best, and Busch is one of the best, if not the best.

New Hampshire Motor Speedway is the next destination on the 2021 road trip for the NASCAR Xfinity Series. It’s the first trip to New Hampshire for the Xfinity Series since 2019, as the 2020 race was canceled and moved to Kentucky Speedway due to the COVID-19 pandemic.

The Ambetter Get Vaccinated 200 goes green at 3 p.m. ET on NBCSN and PRN on Saturday, July 17.

The series will be off the following two weeks, the final off weekends of the season, for the postponed 2020 Tokyo Summer Olympics.

Beginning Saturday, Aug. 7 at Watkins Glen International, the Xfinity field begins a stretch of 14 straight races that will culminate in the season finale at Phoenix Raceway on Saturday, Nov. 6.

Wrecking a teammate looking for his first win to get to 102. Just Kyle being Kyle and keeping it classy.