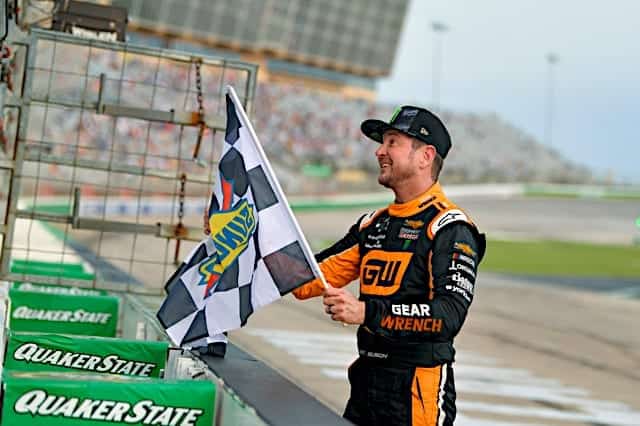 The term “Busch Whacker” first surfaced in NASCAR circles back in the late ’90s, used as a term to describe the Cup Series regulars who stole wins in what was then the Busch (now Xfinity) Series. On Sunday, the racing brothers from Las Vegas gave the term a whole new meaning. Kurt and Kyle Busch walloped the field at Atlanta Motor Speedway, leading pretty much all of the race and ensuring that the only way anyone else was going to see their name atop the rundown was to change their surname to Busch or hope some misfortune would befall the duo. Spoiler alert: neither happened.

While it may end up as a swan song for Chip Ganassi Racing as we know it, it seems less likely that it will serve as such for race winner Kurt Busch. The 2004 champion is still competitive, and thanks to Dale Earnhardt Jr’s not so subtle “I know something but can’t say it yet” hint during the TV broadcast, we can’t help but speculate that he likely will still be wheeling a competitive ride next season.

But I’ve made it clear in past editions of this column that what might happen has no place here. This is about what did happen, and here are a few notable numbers that happened last weekend.

The Sin City-born pair led 235 of the 260 laps between them, and while Kurt and Kyle have finished 1-2 in the past, they’ve never combined to dominate quite like this.

The Busch brothers have finished in the top two positions a total of four times in their careers, with the score now even at two wins each. For a couple drivers who have raced full-time together for 17 years and compiled 92 wins between them, that number honestly seems a bit low. It didn’t occur at all during the first 10 years they were in Cup simultaneously, which is downright bizarre.

If Kurt doesn’t win again in 2021, it will mark the sixth consecutive year that he has won exactly one race. While well short of the all time record of nine set by Ricky Rudd between 1988 and 1996, it is the longest active such streak by far.

Speaking of winning once a year, Kevin Harvick has won at least one race every season since 2010. However, the schedule continues to wind down and not only has “The Closer” failed to win, he doesn’t even seem to be on the verge. Granted, there’s still a long way to go, but this is a streak I wouldn’t have expected to be in jeopardy coming into the year. With the last race at Phoenix, there will certainly still be hope even if he arrives in Arizona still hunting that first win of 2021.

Tyler Reddick hasn’t finished outside of the top 20 since Atlanta … the first one, that is. For the last 15 consecutive races, Reddick has been 20th or higher at the finish, including 10 top-10 results — not to mention his runner-up finish in the third outing of 2021 at Homestead. Reddick seems to be on the cusp of his maiden victory and still may very well make the playoffs without it.

Ricky Stenhouse Jr. was 13th in points following the eighth race of the year at Martinsville, but the No. 47 car has tumbled to 21st after the most recent outing at Atlanta. Stenhouse has been in the garage at the conclusion of four races in that span, three of which were due to mechanical issues. The eight positions he lost means that there is almost no way that Stenhouse will make the playoffs without a win, and with just two top 10s in 21 races, that seems like a longshot at best.

After another heartbreak last weekend, Daniel Hemric has now led 910 laps in the Xfinity Series but none of them have ever been the final lap of a race. No driver in series history has ever racked up more laps led prior to reaching victory lane. For the sake of Hemric, his team, and his fans, let’s hope that ends soon.

If Harvick doesn’t win before Phoenix and isn’t in the final 4, his chances of winning are 0%. We all know that no one races the chosen 4. Haven’t you been paying attention? Actually, I’d love to see it happen but it won’t.

Same,
It would put our theory that the other cars step out of the way as we all know Harvick would be hungry to keep that win streak alive and is good at that track. If he ran 5th all day, then that would conclude it, these guys pull over for the championship 4 ?

Going off today’s performances though, SHR has some work to do.