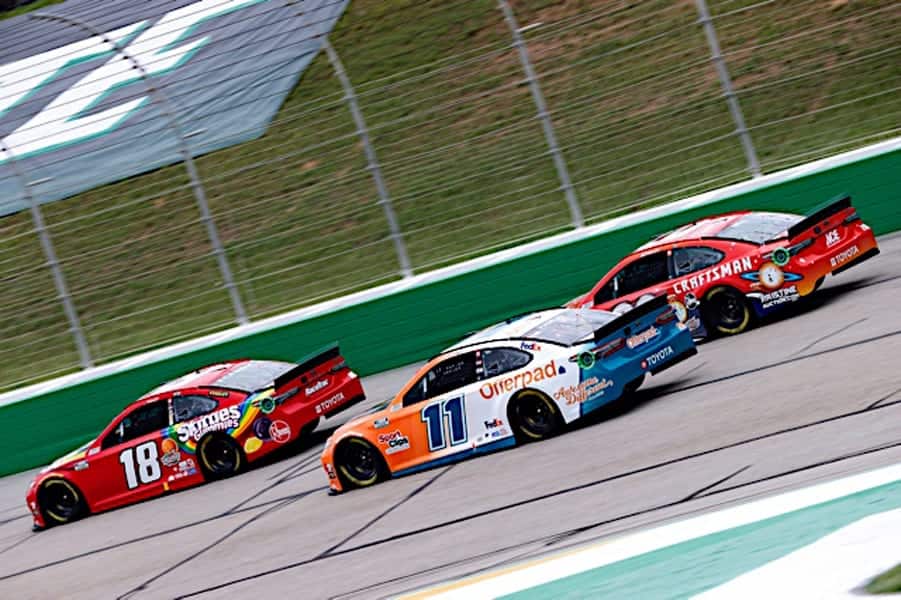 I’ve never seen Cool Hand Luke, but I know the quote from that movie that holds water and will for years and years to come in human society is this one.

“What we’ve got here is failure to communicate.”

NASCAR and Speedway Motorsports, Inc., have been failing to do so with the drivers. And that ain’t good.

It all seemed to come to a head this past weekend at Atlanta Motor Speedway, where the 1.54-mile track announced not just a repave, but a reconfiguration project that will see banking increase and the surface narrowed in what the sanctioning body hopes will create pack-style racing seen at Daytona International Speedway and Talladega Superspeedway.

So they are trying to replicate the surface with new pavement? But want pack racing. I’m as confused as the other 35 drivers about this deal.

Most fans and drivers met the announcement with uproar. Because everyone hates change, right? But they may have a point with this specific instance. Because as Speedway Motorsports senior vice-president for operations and development Steve Swift said himself …

“I say this — in kind of jest, when a driver is happy about our racetrack, usually the fans aren’t. We want to make sure what we’re creating is what the fans want to see.”

And then the floodgates opened.

Kyle Busch said the new track “is going to be shit” after winning his 102nd and (possibly) final NASCAR Xfinity Series race on Saturday (July 10).

“Just think about it,” he said. “Everybody needs to just think. There ain’t nobody thinking. Brains for sale. Never used. Operating racetracks.”

“You’re going to tell me that the [Next Gen] cars that we’re going to have with more tire, wider tire, we’re not going to go faster? So we’re the ones that need to be consulted as well, too, a little bit. Narrowing a racetrack … all we’ve done at every single racetrack that we’ve gone to over the years is try to widen the racing groove. Right? What do you think the PJ1 bulls**t is for? To widen the racing groove.”

His Joe Gibbs Racing teammate Denny Hamlin called the process of communication between the tracks, NASCAR and the drivers, “Broken down […] that’s what is so frustrating.”

He mentioned that although drivers may not agree with the direction the sanctioning body or SMI is going, they’ll still help. It’s not their decision, but they are the ones putting on the show every weekend. It’s in everybody’s best interest to be on the same page and pulling in the same direction, even if it’s against the drivers’ will.

“I think we can help, we’re an asset,” Hamlin said. “We are the biggest asset that NASCAR and these tracks can have, just tell us your goals. We may not agree with the goal, but we can help them get to where they want to go.”

Hamlin mentioned he was consulted by International Speedway Corp., with the Auto Club Speedway short track project and provided his input, which makes the lack of communication from SMI with Atlanta’s project all the more infuriating.

“I just think that the drivers felt super disconnected that our input is not asked,” he said. “Not because we’re looking out for ourselves, but I think what they’re trying to accomplish is not feasible under what the current configuration is that they’re going with.”

Joey Logano said he was “blindsided” by the Atlanta announcement and, like many of his driver counterparts, “had no idea” it was coming.

“I don’t get it,” he said. “I think something I’ve learned over the last few years is everyone can bring something different to the table. When you bring 10 other people around, that might change your perspective. Well, if we’re all sitting around a table we can probably change each other’s perspective a little bit to come up with what’s the best, but we’ve got to have the meeting to do that. We didn’t have the opportunity to do that.

“There’s a way to communicate with all of us. It’s pretty simple. It’s not like we need something formally structured. I think we could all be big boys about it and talk about things. It’s a small group. We all see the same people every week, so it’s not too hard to call somebody, no matter what it is. I’m not just saying this about the racetrack, no matter what it is. I’m a big fan of communicating, so that’s all it takes.”

Said Kevin Harvick: “You would think that you would want the drivers’ input, and I think a lot of times the thought process is, ‘Well, we need to make the drivers uncomfortable.’

“Instead, you wind up with a media press conference that winds up all about your track repave that you didn’t ask any of the drivers about, so it is what it is.”

Not to mention that the safety aspect of the Next Gen car has been rumored to be … not great. And why have those rumors been surfacing? You guessed it: faulty communication.

Chase Briscoe appeared to confirm a comment on Reddit stating the crash test at Talladega “killed the dummy,” when in reality, that’s not what happened, according to NASCAR.

This is the memo #NASCAR sent to drivers about the Talladega crash test pic.twitter.com/Yo46YBqpAw

Ryan Blaney then spoke on what he understood about the crash, saying it wasn’t that the dummy was killed, but that the actual apparatus didn’t work.

The sled malfunctioned and it literally wouldn't go, so when they said it failed, the test failed. They didn’t even get to crash the car. I got confused on that too when I was told a couple weeks ago, but that’s what it was…

But the point here is that there is a new car coming out, safety is and should be paramount and there seems to be some question about it. Questions that Hamlin says are falling on deaf ears.

“It’s definitely worrying. We had a good meeting with NASCAR again a few weeks ago, and it was documented about the meeting,” he said. “I told the drivers, you better get together, you better gather some questions that you want to ask and we submitted our questions, and they [NASCAR] had some time to prepare their answers for those questions. Some of them, they still had to get answers to. A lot of it was what does a real crash test look like.

“I guess there’s rumors that start from people that are kind of close to it, and it doesn’t sound great, but again there’s no hard data. I would assume if things went fantastic, we would have heard about it pretty soon.”

“As we sat in the drivers’ meeting that NASCAR had with us to show us everything, I think the most frustrating part of the whole process is the fact that the safety piece to the drivers and the conversation with the drivers, which was asked for by the drivers, was had at the very end of everything,” he said. “I think as you look at that, I think the guys driving the cars are owed at least the respect, enough to at least be a part of the process of what’s going on. I think it’s that and the racetrack, and I think everybody is a little bit frustrated with just how all of that has been handled.”

After more chatter, Scott Miller publicly said that there is nothing to worry about when it comes to the safety of the Next Gen car.

ICYMI: @NASCAR's Scott Miller helped separate fact from fiction in regards to the safety of the Next Gen Car@TheMikeBagley | @PPistone | #TMDNASCAR pic.twitter.com/pccMUmK642

The big takeaway from this weekend at Atlanta is the lack of communication. It doesn’t hurt anybody to give the other party a heads up on what’s happening, be it a repave, track profile change, safety test or anything in between. There clearly is a rift between the drivers and the upper management that makes the decisions about the sport.

I’m not saying it’s a CART/IRL situation, and it’s far from it, but this situation is one that’s easily fixable by just talking like adults and hashing it out.

It can’t be that hard, right?

Ross Chastain didn’t do anything wrong, did he? Helping a teammate happens all the time. – Alex D., Owensboro, Ky.

No, he did nothing wrong. And neither did Logano when he basically did the same thing earlier this season at the same racetrack when he air-blocked Kyle Larson, allowing Team Penske teammate Blaney to pass Larson for the win.

It happens in racing. Teammates being teammates.

“He can say what he wants,” Chastain said, via NBC Sports. “I don’t really care. I mean, yeah, he lost the race, he’s going to be mad. I’m mad, I finished (21st), a lap down, with a teammate winning. That’s not what I want either. He wanted to win, I wanted to run better.”

I did find it pretty funny that Chastain basically said he held his line and didn’t deliberately do anything to help Kurt Busch, while simultaneously his teammate was shouting “SHAKE AND BAKE” over the radio, thanking Chastain for the block.

It’s an obvious decision for Chastain. Help your teammate get a win, and a rising tide lifts all boats. Now Busch is locked into the playoffs, and Chip Ganassi Racing can theoretically allocate their assets toward the No. 42 camp for a final playoff push. Don’t help your teammate? Create a rift within an already tense organization (thanks, Trackhouse Racing) and let the rich get richer, a la Kyle Busch.

So, no, Alex. Chastain didn’t do a thing wrong. Kyle would have expected a Joe Gibbs Racing teammate to do the same thing, and I’m sure a teammate would expect Kyle to do the same for them. It’s not “team orders” or “Formula 1 infiltration.” It’s just racing. Learn to live with it.

Chastain was also fighting to stay on the lead lap at the time. A driver has every right to fight hard to stay in the lead lap.

I always think back to Bristol a few years ago when Newman held up leader MattyD and he eventually lost the upset victory to Hamlin because of the Newman hold up.

People were upset that Newman did not just concede to the leader. But fighting to stay in the lead lap is an equally important thing.

Recall the Pocono 2 race and the #24 fighting to stay on the lead lap against stage leader MTJ. That lap fight is what put him in position to win until he needed gas.