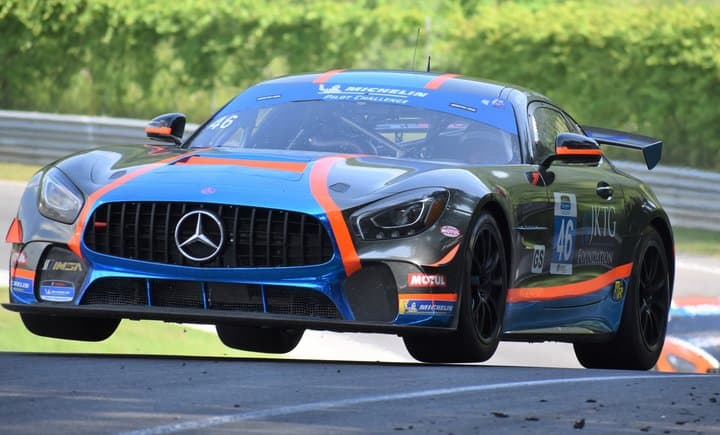 Saturday morning will see IMSA Michelin Pilot Challenge teams take on the classic 1.53-mile configuration of Lime Rock Park for two hours of action.  TeamTGM is going for their third straight win at Lime Rock, but their two Camaros are just two of 36 teams that are entered.

In the Grand Sport class, there are 22 cars entered.  Probably the most interesting entry comes out of Riley Motorsports.  Pierre Kleinubing is out of the No. 14 Toyota GR Supra GT4 after a one-off appearance in Watkins Glen.  In his place is Sacha Fenestraz, who will be making his IMSA debut.  Fenestraz is currently a reserve driver for Jaguar Racing in Formula E.  He was also supposed to race full-time in both Super GT and Super Formula in Japan this year.  However, travel restrictions in Japan make it very difficult for Europeans to travel to Japan at all at the moment.  As a result, Fenestraz is using his strong relationship with Toyota (having previously raced for what amounts to Toyota’s factory team in Super GT) to expand his racing horizons.

In addition, Riley Motorsports’ second car, the No. 21 Toyota, is back after missing the Sahlen’s 120 at the Glen.  Scott Andrews‘ crash late in the Tioga Downs Casino Resort 240 not only bent the Armco barrier, but effectively wrote off a chassis.  A replacement Supra has been sourced.

Notlad Racing with RS1 is back with their Aston Martin for their first sprint race of the year.  Tioga Downs Casino Resort 240 winners Patrick Gallagher and Stevan McAleer are back in the car.

AutoTechnic Racing, which typically races in SRO America’s Pirelli GT4 America SprintX, is making their IMSA Michelin Pilot Challenge debut with a BMW M4 GT4.  Behind the wheel will be Elivan Goulart and Attilio Albani.  Goulart is best known for his successful time racing in a TCA-class Mazda MX-5 in what is now TC America.

The TCR class has 14 teams entered.  Rockwell Autosport Development is not entered.

The only change of note is that VGMC Racing has reverted to their driver lineup from the four-hour race at Watkins Glen.  That means that team owner Victor Gonzalez Jr. will be back in the car alongside Karl Wittmer.

The Lime Rock Park 120 is scheduled to go green at 11:05 a.m. Saturday.  The race will be streamed live on NBC Sports’ TrackPass service.