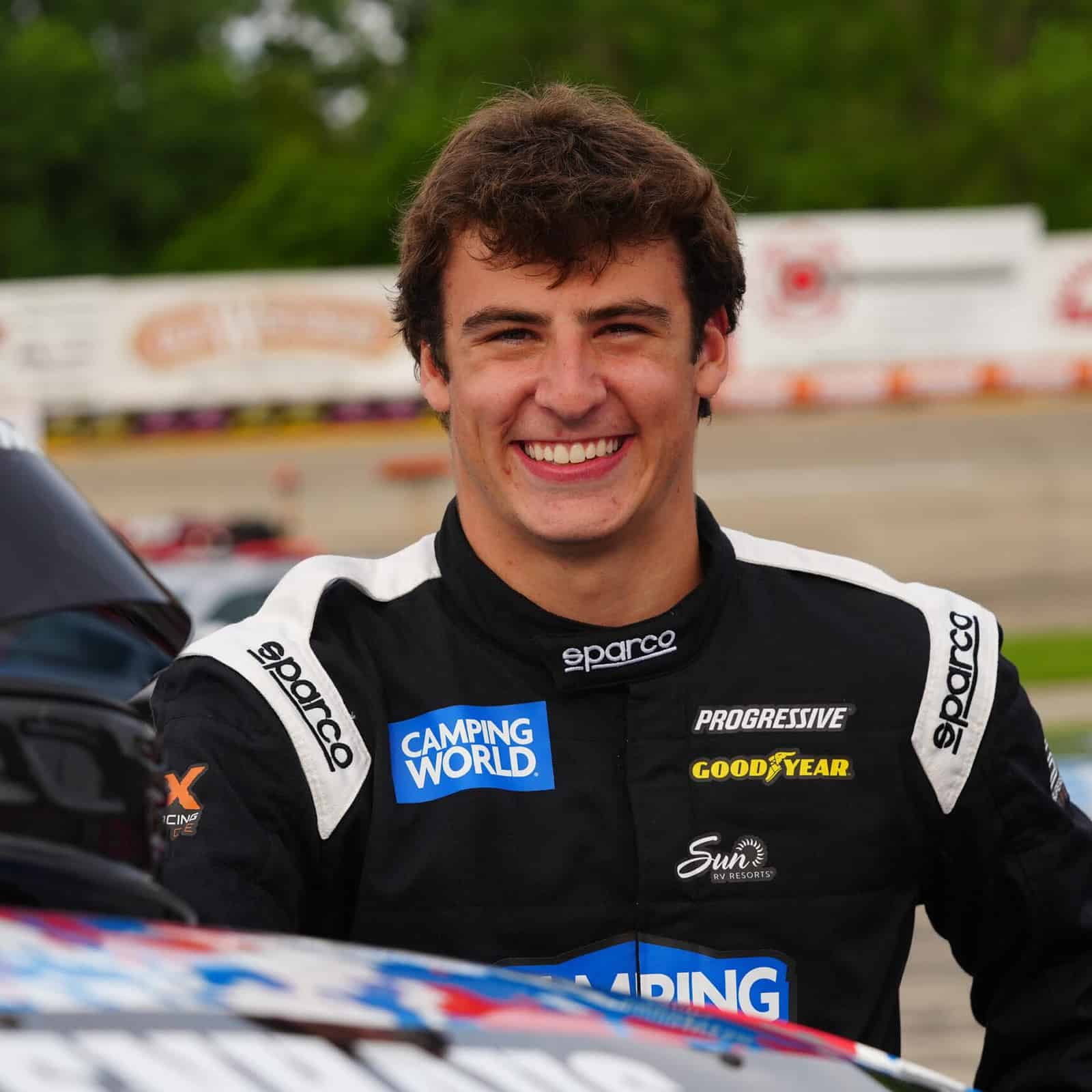 In Saturday (July 10) night’s Superstar Racing Experience event at Slinger Speedway in Wisconsin, 17-year-old Luke Fenhaus held his own against the likes of Tony Stewart, Bobby Labonte and Helio Castroneves for most of the night. Securing a spot in the SRX race by way of a super late model triumph in the Slinger Nationals, and on top of that becoming the youngest winner of that event, Fenhaus led 92 laps on Saturday and was well out in front when a caution on the final lap reset the field. Marco Andretti snuck by Fenhaus on the last restart to win.

“[Andretti] was coming,” he said. “I watched him in my mirror, we were trying our best to hold him off, and I think we would have. […] He kind of got a head start on me [on the restart] and I spun my tires a little bit, but fair game, I mean, that’s racing. […] I thought maybe [with] five more laps, I could have got there for sure. That was just [on] that outside line, he just kept his momentum rolling so much more. And after each caution, it seemed like the inside was super tight and that outside was the way to go. I was gonna pick the outside, but I kind of just thought he would wash me up the racetrack and still [have] the same outcome. So it is what it is, it’s a racing deal. But to say the least, I had a hell of a lot of fun racing those guys.”

Fenhaus hails from Wausau in the Badger State, a city that sits more than 100 miles north of Milwaukee. Slinger Speedway, meanwhile, is about the same distance from Wausau and less than an hour outside the Cream City. Fenhaus started out racing on snowmobiles at age four before transitioning to things on four wheels.

“I ran for a couple of years [in snowmobiles] and did well and won some races […] and championships,” Fenhaus said, “[…] and then I started in go-karts, not really sure what age. I would say six, seven eight, and then […] did well in that and then moved up to mini bandoleros, ran really well in there.

“So then we finally took the step into a full size racecar in the Midwest Truck Series,” he added, “and tested in that at age 13, ran it when I was 14 and finished second in the points there. […] Got Rookie of the Year and then moved into a super late model at age 14, ran at my home track here at State Park Speedway in Wausau here and won the championship there my first year.”

It’s a switch that yielded success for Fenhaus.

“That was kind of when the racecar side started to take over,” he said. “[…] I was kind of just starting my racing career and doing well, and that’s when kind of my whole family took over and wanted to help me succeed. And they have always been there for me, so it’s been cool to go through the ranks. And hopefully we can do it to the upper level of NASCAR now.

All of his experience was put to the test Tuesday (July 13) night at the Slinger Nationals, where he went up against the likes of Camping World Truck Series drivers Derek Kraus and Carson Hocevar, the Cup Series’ Erik Jones, 2020 Snowball Derby winner Ty Majeski and the legendary Rich Bickle.

“It was big for us,” Fenhaus said of the win. “To check that off the bucket list, […] we haven’t had the best of luck this year. So that really helped our confidence. And not only that, just to add our name to the list of drivers that have one, that was that was special to us. And it was the biggest win of my career. So it’s been really, really fun.

“The super late models are tough to handle bump stop-wise, geometry-wise and the front end is super tweaky and tricky and sensitive. So you’ve got to be on top of your game and […] you can really drive the heck out of them and run them hard and kind of be loose and still run it well, because they’re so light and they’re so tricky to handle. Slinger is kind of a unique and different track than anywhere else that I’ve raced that. The banking is different, the grip-wise is different, being on the throttle that fast and that hard is completely different, so it’s hard to get used to that racetrack. It’s intimidating, to say the least about it.”

Four days later, Fenhaus was racing against three past Cup Series champions, a four-time Indianapolis 500 winner, a seven-time Trans-Am champion and a host of other talented racers.

“That’s, like, the biggest event in my life,” he said. “And this is kind of all I’ve ever dreamed of […] to race against those guys and talk to those guys. So it was a huge deal for me in my racing career, for sure. I got to thank Ray [Evernham] and Tony and everyone at SRX that has helped me and put me in their car, in the position that I get to run in their program.

“So I’m super thankful for that, but I really was just kind of focused on the main goal, and that was to soak in the whole experience and just enjoy it, talk to them and kind of learn their stories…and they kind of told me some stories of their own, and it was just cool be by them and talk to them and obviously race with them.”

In addition to talking with series drivers before hitting the track, Fenhaus watched the SRX opener at Stafford and later texted Doug Coby, the six-time Whelen Modified champion who held off all comers to win that race.

“I gave Coby a text message, I think like two days before the race, because I was so nervous about everything that was happening,” Fenhaus said. “I didn’t know how the car was gonna react, and I was super nervous. So I texted him, and he gave me a bunch of info, and it just helped me calm down and it helped me kind of understand the car more. […]  The FURY chassis, I was familiar with, the different tire obviously was different. And the horsepower was a little bit of a challenge to get used to, but we kind of got used to it kind of kind of quick. It was weird at first but an awesome experience to say the least.”

On the track, there was a bit of a balance between Fenhaus and the rest of the SRX field: he had just won at Slinger yet was new to the SRX cars overall, while the other drivers knew the cars but were mostly new to Slinger.

“Those guys kind of had the upper hand on the car and I had the upper hand on Slinger,” he said. “So it for sure helped me, and those guys kind of struggled around there. Andretti was fast kind of all day, Stewart was fast all day, Hailie got it quick. So those guys are so good at what they do. They get used to racetracks and their braking points and their gas pedal points so fast and so quickly. So it was a challenge. But I think the track helped me for sure. Just kind of the little ways to pass and kind of find that extra speed helped me.”

Racing against drivers he grew up watching, too, was memorable.

“That’s kind of what I’ve always wanted to do. […] I used to watch [those guys] growing up. Bill [Elliott]’s kind of before my time, but Tony I watched growing up and it was cool watching him win races and win championships. My family loved him. And it was just cool to soak in the moment and talk to him, and just acknowledge what he has done to the motorsports industry. So it was cool to hang out with those guys and race with them.”

Fenhaus was appreciative of the support in person and on social media over the weekend, calling the event a “humbling experience.” His aspirations extend beyond the late models into NASCAR, and really to anything he can jump into and drive.

“I would love to hop in other race cars, and test out other things, I think that makes you a better racecar driver, for sure,” he said. “And I’d love to, if the opportunity comes, to race in NASCAR. That’s my dream and that’s my goal. And that’s what I’m pushing for, hopefully get in the Truck Series and run well and just kind of move up the ranks throughout NASCAR. But I’d love to try out different things, run different cars, experiment and kind of try and adapt to those other racecars.”

As for Saturday, Fenhaus observed the variance in driving styles between himself and someone like the open-wheel-experienced Andretti. Stewart’s methodology proved to be closer to Fenhaus’ and the pair fought for the lead lap after lap, side by side on the high banks of the quarter-mile oval, Fenhaus on the inside and Stewart up high.

“In my Super Late Model, the inside’s kind of the go-to,” he said. “It can go both ways. I think for [the SRX] cars, the outside was better. You just kept up your momentum so much more. And that’s where I kind of struggled more as I kind of picked the bottom and went to his inside, and he would kind of pinch me down at times, but also ran me super clean. So I think [on] the outside he just kept his momentum up and used his roll speed to keep it going.”

From snowmobiles to the Midwest Truck Series, from late models to SRX and matching three-time Cup champion Tony Stewart turn for turn around Slinger.

In short, the past week has been a veritable whirlwind for Fenhaus, who won’t graduate high school until next year, with his win in the Nationals and the runner-up finish in his SRX debut coming less than a week apart.

“This past week has been crazy for me, obviously,” he said. “The big win at the Slinger Nationals, it’s given me a bunch of confidence going into the next late model races. So that was super special to us, and turned some heads with that. But also to run with Tony and those guys, it was super, super cool to be there and talk to those guys, and talk to Ray and Ray has been a lot of help, so I appreciate everyone there. And I’m looking forward to the next step in my journey and I can’t thank everyone that has been involved so far, and hopefully we can keep rolling throughout the next steps in my career.”

Thanks for the article, Adam! It’s great to read more about the local challengers in the SRX series and their experiences / views and career backgrounds/goals.