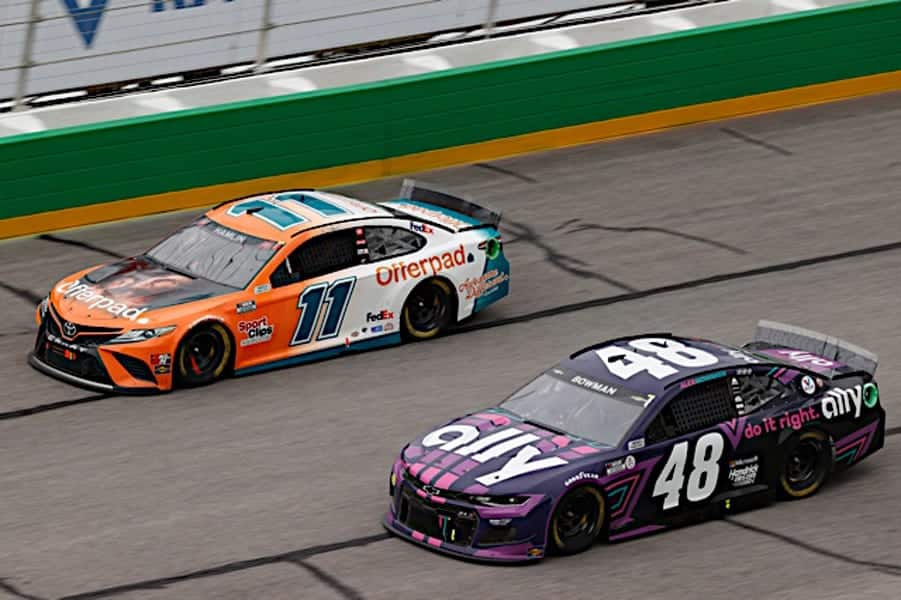 Asking whether Hendrick Motorsports has taken a step back in the midst of its best season in years probably seems absurd on the surface.

But lingering are reports that following the June 20 Ally 400 at Nashville Superspeedway, NASCAR suggested Hendrick Motorsports make changes to the noses of its Chevrolets, reportedly warning that the program was too deep into the rule book’s gray area.

Were changes made? If so, have they made a difference?

Did anything change after that?

See also
5 Points to Ponder: Does Joe Gibbs Racing Have the Upper Hand?

The next week at Pocono Raceway, Larson was a corner and one inflated tire away from winning his fourth consecutive race. Instead, the left-front tire failed and teammate Bowman came through to win. That day, Bowman (16), Larson (15) and William Byron (13) combined to lead 44 of 130 laps in a race dictated by pit strategy.

Asked in the media center whether he felt vindicated that the cars still had speed regardless of any sort of modifications, Hendrick Motorsports Vice President Jeff Andrews said he understands what it’s like to be the team everyone is chasing but believed in NASCAR’s officiating.

With all the chatter of whether NASCAR had Hendrick make changes to its noses after Nashville (NASCAR said it didn’t issue any edicts), I asked HMS VP Jeff Andrews if he felt vindication that they were still fast. He said it wasn’t vindication. His comments: pic.twitter.com/Q2Q7r2P6GS

“NASCAR and Jay Fabian, they do a great job of regulating this sport and keeping this sport in line,” Andrews said. “Any time they talk to you or want you to address something on your racecars, we go back and address that.”

The effects? Larson has led zero laps in the last three races (Pocono II, Road America, Atlanta), the first races he hasn’t led since Darlington Raceway on May 9.

Road America remained a bright spot for the company, as Elliott led 24 laps and Byron 15 en route to Elliott’s second win of the season. But Atlanta was an obvious diversion from what we’ve come to expect from Hendrick Motorsports in 2021.

Elliott started from the pole but led just 13 laps – the only 13 laps led by a Hendrick team in the Quaker State 400. Bowman was steadily inside the top five all race, but Elliott and Larson only popped up there in spurts, albeit both were at points hindered by pit-road penalties.

Keep in mind that Atlanta, despite being unique with its extraordinarily abrasive surface, was the first ‘typical’ Cup race since Nashville; Pocono and Road America both have such distinctly different corners and strategy at play that it seems unfair to quantify much meaningful data from either track.

Atlanta, on the other hand, was a known entity. Larson smoked the field there in March and led 269 of 325 laps before eventually squandering the lead and the win to Ryan Blaney, who charged to victory lane instead.

Suddenly, Larson, whose domination felt more inevitable by the lap just three races ago, seems to have lost an edge.

This column is not to say Hendrick is suddenly back to considering top 10s as good days. The organization as a whole sits firmly in the upper echelon of the sport and is sure to compete for wins as the season carries forward.

But the team suddenly feels tangible again. Kyle Busch brought a Joe Gibbs Racing Toyota back to victory lane in the second Pocono race, and Kurt Busch surprised everybody with a butt-whooping courtesy of his Chip Ganassi Racing Chevrolet at Atlanta.

Whether anything on Hendrick’s cars was truly changed is at this time not confirmed, and requests to speak with crew chiefs at Hendrick Motorsports were politely declined.

Perhaps the timing is purely coincidental. It’s completely possible that the team is toying with other elements ahead of the playoffs to learn what works and what doesn’t before the regular season comes to an end. Give credit, too, to their competitors who very well could be closing the gap naturally.

Maybe, though, there is something to keep an eye on if Hendrick doesn’t reclaim its stranglehold on the field as the season winds down.

Hendrick’s success isn’t going anywhere any time soon. The team, though, may have finally come back to Earth.

From what I understand, it was a small change to the rear quarter panels that has put Stewart-Haas on it’s back foot all season. So small changes can lead to big changes on track. If it’s true that NASCAR suggested changes to the nose of Hendrick cars. That could mean that they saw the future, & decided that the final 4 in the Championship race, being all Hendrick cars. Wasn’t really in their best interests, vis a vie either the fans, or the other manufacturers.

I certainly hope NASCAR has discovered and put at least a temporary end to Cheatin’ Chad’s skullduggery. HMS has a long history of being “too deep into the rule book’s gray area,” starting famously with Ray Evernham, who was once told to never bring a certain car back to the track.

I certainly hope NASCAR has discovered and put at least a temporary end to Cheatin’ Chad’s skullduggery. HMS has a long history of being “too deep into the rule book’s gray area,” starting famously with Ray Evernham, who was once told to never bring a certain car back to the track.

Yeah at the all-star race. BFD. That’s a joke anyway.
They didn’t have to let him run it.

About Time Hendricks was fined for cheating by using wind tunnel to much, Chevy was way behind ford and even behind Toyota but wallah! Chevy wins championship! What a joke. Now this year Ford has struggled slowed down by Nasar rule changes Ford won more than Chevy and Toyota combined last year now can’t keep up??? Especially Harvick. Nascar is a joke they always change rules for Chevy!

Zach, come on Alex has won 3 races, why put Chase before him, your article should read Klyle Larson has won 4 races, Alex Bowman has one 3 races, and recently Chase has won.

If you think, or ever did think, that NASCAR “officiating” is or ever has been on the “up and up”, go take a listen to Dale Jr.’s podcast in which he (finally) invited Jimmy Spencer on the show. Hear what Jimmy experienced at Daytona that sparked his comments about Jr’s win in 2000, and take a tiny peek into the underbelly of backroom dealings in how the “show” is handled. It’ll open your eyes a little bit if you haven’t already seen or suspected it.

I’m not saying everything is scripted, but favorites are definitely played and manipulating the outcome of the show is always an option.