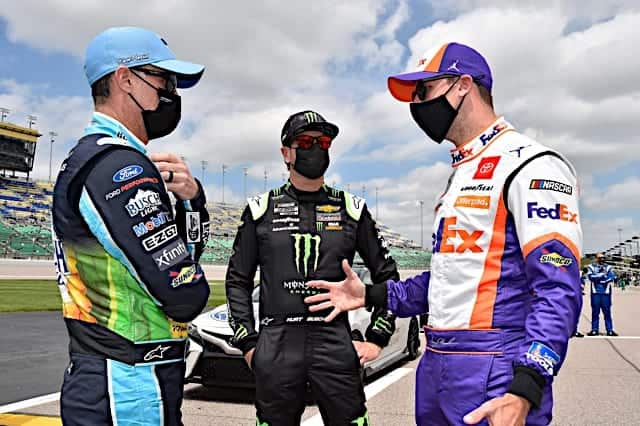 This past weekend, there was a lot of noise about the new configuration coming to Atlanta Motor Speedway in 2022. The buzz centered around a few drivers who were vocal about how NASCAR and Speedway Motorsports, the parent company of Atlanta Motor Speedway, did not include the drivers in the discussion for the track’s redesign.

In fact, the drivers were unhappy that they found out just like everyone else did when SMI released the news earlier in the week. It was also clear that the drivers weren’t happy about NASCAR’s lack of transparency with certain things, including the safety of NASCAR’s Next Gen car.

Drivers are an important part of the sport. They are the ones that put their lives on the line every time they strap into a vehicle. However, sometimes what the drivers want and what the fans want are two completely different things.

That got us thinking: Should NASCAR consult the drivers when making a major decision? Clayton Caldwell and Vito Pugliese debate.

Changes for Best Interest of Fans, not Drivers

NASCAR can do whatever it wants. The rules don’t matter. What happens previously doesn’t matter. They don’t have to consult anybody and any time they do is out of courtesy for that party.

I understand that the drivers are frustrated with NASCAR, especially when the sport goes around and touts that it factors everyone into their decision making and then doesn’t consult an important group of people.

Yet I understand why NASCAR wouldn’t want the drivers in the decision making. Sometimes the drivers’ interests aren’t in the best interest for the sport. Let’s look at a time the drivers signed off on something that backfired on NASCAR and the racetracks. I take you back to Bristol Motor SpeedwY in 2007.

That’s when Bristol went through a major reconfiguration. Speedway Motorsports, the parent company of Bristol, added progressive banking to the half-mile track. It made the track wider, more “racy” and made it easier to pass. The ‘bump-and-run’ that was so synonymous with the track was no more. The beating and banging and the action that Bristol produced was now gone. The track changed completely. Oh and the drivers … they absolutely loved it.

Don’t believe me? Check out this August 2007 article in the Orlando Sentinel written by legendary motorsports writer Ed Hinton. In it, he discusses the reaction after the first race on the new configuration.

I’ll save you the time and energy and get right to the good part — the part of the article where drivers Carl Edwards and Tony Stewart praised Bristol’s new surface with Edwards giving the track its biggest praise.

“Now you have a track,” Edwards said, “where if you have a really fast car, you can kind of pass people and move around and get to the front.”

Rave reviews were the driver consensus. Tony Stewart, never one to stifle his criticisms of anything in NASCAR, called the reconstruction “an ace job” after finishing fourth. “This place is awesome.”

The article also states the most important fact about Bristol at that time. That night, Bristol Motor Speedway had its 51st consecutive sellout. Keep in mind that’s at a track that had 250,000 seats. That streak was broken in 2010 and the facility hasn’t come close to a sellout since. The demand for tickets fell when the new configuration was created and they haven’t rebounded since.

Some may blame the bad economy, but the reality is that Bristol was changed forever. The fans didn’t like the new track. The action, the beating and banging – the stuff most drivers hate, was gone and the fans didn’t come back to Bristol.

In life, you are supposed to learn from past mistakes. Not everyone does that, but for Bruton Smith and the leaders at SMI, I am sure Bristol still leaves a bit of a sour taste in their mouths. They had the hottest ticket in the country and threw it all away when they changed Bristol, all while the drivers smiled and gloated about the new racetrack. I’m sure they got a lot of driver input to change their iconic racetrack and it backfired. Big time!

There is no question in my mind that the changes to Atlanta Motor Speedway will produce tighter racing and may pick up the intensity, especially on the restarts. More crashes are bound to happen. I’ve been around long enough to know that drivers do not like crashes. Drivers like to control their own destinies and they won’t be able to do that as much with the new configuration.

If NASCAR thought the drivers were going to push back on the changes to Atlanta Motor Speedway, they were right. Just look at the comments most drivers made in the media center this past week.

NASCAR should keep the fans the number one priority. Everything and everyone else come second. The fans are the customers, and the customers are the most important thing for NASCAR, no ifs, ands or buts. If the drivers don’t see that and they become a thorn for NASCAR, why would they consult them?

You can say this about any decision in NASCAR really. Some drivers have been vocal about shortening the amount of days they are at the track, which would hurt the fan experience in a lot of ways. In the grand scheme of things, does that help the sport? That’s just another situation where drivers are putting their interests in front of the sport’s best interest. And I’m sure I can find a few more instances of that.

In the end, NASCAR should make the decisions based on what they think is best for the sport. That’s what everyone should understand. Best interest of the sport. If a certain group can’t understand that, then they shouldn’t be consulted. Period. – Clayton Caldwell

If You Have an Issue with Your Plumbing, Do You Call a Plumber or iRacing?

The brotherly battle between Kurt Busch and Kyle Busch in the waning laps Sunday (July 11) had many likely questioning, “Why would we repave this track?!” Then we had to stop the race for 45 minutes to fix a couple potholes on the frontstretch. Okay, point taken – a repave is needed. But a reconfiguration bringing higher banking and a narrower racing surface? Surely, they consulted the competitors on such a proposed change.

The NASCAR universe raised a collective eyebrow after Denny Hamlin tweeted that no drivers were consulted regarding the Atlanta reconfiguration. Hamlin raised the point that the last three track “fixes” that were conducted without driver input resulted in a track no longer in use, one lost a date, and in the case of Bristol, they essentially gave up and threw dirt on it. Given the abysmal results of the evidence cited by Hamlin, it would be hard to argue that the committees steering these decisions don’t need some consultant input from the competitors tasked with negotiating the new surface.

As much as I hate traditional sports analogies, would the NBA tear up courts and install a new type of wood without the players issuing some sort of feedback to support their decision making?

A cursory check of comments on social media from fans once the new dimensions were released, most fans had essentially the same thread of comment:

NASCAR’s history with repaving and reconfiguration has been abysmal for over 15 years now. Charlotte was forever ruined in 2005 – absolutely devastated from what it had been, from a process known as levigating, and removing the Humpy Bump in Turn 4. What resulted? A crash-marred playoff race that fall that drew the ire of drivers as tires were letting go with 2008 Brickyard 400 regularity. Fifteen cautions for 84 laps – which if we’re fair, was less than the 103 laps of caution ran a few months earlier at the Coca-Cola 600. If that exercise wasn’t warning enough, it was inexplicably attempted again with Bristol – now cloaked in truckloads of dirt like a Monster Jam event.

The decision to not consult drivers as said, somewhat jokingly by Speedway Motorsports Vice President of Operations Development Steve Swift, saying when drivers are happy with a track, usually the fans are not.

Fair enough. But their track record of catering to some fan survey hasn’t exactly gone over well either. We’re on what, our third or fourth iteration of a horsepower and aero package that was supposed to create some sort of “pack” racing at intermediate tracks? Now we’re transitioning to a completely new car, with different sized wheels, body configuration, construction and a myriad of other items that have never been on a Cup Series car in competition – and they’re going to completely change the layout without driver or team input?

Dale Earnhardt, Jr. gave his critique of the new proposed layout rendering, after running laps in an iRacing simulation, and said compared to the existing configuration – there was virtually no difference.

So why even bother? It would have been less costly and easier to just repave it and put a road-course inside in case it sucked.

What would the point be of making a racetrack narrow, other than create an atmosphere for accidents? The new car is going to have 200 hp less than whatever five year-old Dodge Hellcat sitting on a used car lot that’s been doing donuts for the last 60,000 miles.

It isn’t like they’re going to be hurtling into the first turn at over 212 mph like they used to, which caused aero issues of its own. A repave may have been sufficient to help address the structural issues in the interim, while we vet out how the new car is actually going to perform. If it’s not going to race any different, why sink the money into it? That doesn’t seem like that action alone would justify the track retraining both of its dates – the irony of Texas having lost a date, not lost on anyone.

This isn’t to say that driver input is always going to be the right call. It was Brad Keselowski who floated the idea for the 2016 All-Star race that produced a less than compelling result (not that the next five years were any better), and driver feedback might be irrelevant given the new car that is just a few months away at this point. The product next year will be the ultimate arbiter for Atlanta, but unfortunately in recent years its proven much easier to find a new track than fix a boring one. – Vito Pugliese

IMHO, no, the drivers don’t need to be consulted. That said, it’s relatively inexpensive to develop simulations nowadays. The powers that be can spend a bit of money to develop it, let the drivers run it, and then do a few thousand Monte Carlo runs based on driver/car behavior. It’d be pretty straightforward to see if the redesign is a dud or not. Granted not everything can be modeled nor is every variable known. Still, it’s a way to get valuable feedback (and shut them up).

Big Bill France ruled the sport with an iron fist. Bill France Jr. loosened the reins a little but still reigned supreme. After him it’s been all down hill. Bring back the tyranny. You listen to driver, owner etc input. You do not ask for it.