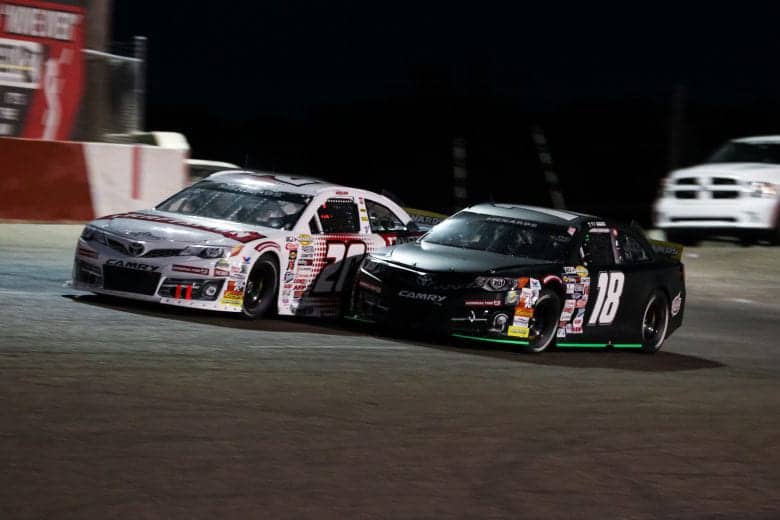 The Zinsser SmartCoat 200 marks the halfway point in the 2021 ARCA Menards Series season. For the 21st time, Berlin Raceway will host the main ARCA series, but the first time since 2018 when Joe Graf Jr. infamously aggressively drove his way to his lone main ARCA series victory.

The 0.438-mile short track in Marne, Michigan will be the site for the continuation of the growing rivalry between teenage Toyota drivers Ty Gibbs and Corey Heim. Neither driver has competed at Berlin before, and the past race at Elko Speedway culminated in Heim using a bump-and-run on Gibbs to win that race and extend his points lead to seven.

“That rivalry has continued to intensify all season long,” ARCA Communications Manager Charlie Krall told Casey Campbell. “It started off maybe not as a friendly rivalry but not a heated rivalry. Now it’s a heated rivalry. It’s starting to reach a boiling point. While we certainly hope it doesn’t evolve into tempers and wrecked race cars, my personal belief is there is nothing wrong with racecar drivers wanting to beat other racecar drivers. Sometimes that’s going to result in some hurt feelings. Ty [Gibbs] and Corey [Heim] want to beat each other badly. The people who benefit the most from it are the fans in the stands watching – they put on a great show.”

Gibbs is eager to drive his No. 18 Joe Gibbs Racing Toyota at Berlin.

“It’s definitely really cool, I love the old worn-out race tracks, I feel like it brings more of the driver into it, so I’m really excited for that and it’s definitely a really different track with how people run it,” he told FOX 17 West Michigan.

With one of the top ARCA rides, Gibbs knows there’s pressure to perform well as his rivalry with Heim grows.

“If you put enough work in then what is there to be stressed about?” he continued. “I feel like that’s been big for me to learn that and learn how it works, I’m just trying to work as hard as I can and all the fine details that make you the best you can be.”

Heim of course enters the race with back-to-back main ARCA series victories. However, his lack of experience at Berlin means he must become creative to prepare for this race.

“Really all I can do is watch previous ARCA races and look at the onboard from that track to kind of get an idea of what I need to do in practice,” Heim told Frontstretch. “We have a limited practice, so we don’t have a whole lot of track time there. But all I can do is talk to the guys in the shop that have been there, talk to some drivers that have been there before, and get my fair share of footage to prepare for that race.”

Regardless of his experience at a racetrack though, Heim expects to contend for the victory.

“Anytime we go somewhere this year, whether I’ve been there or not, our expectation is to win the race,” he continued. “Some tracks can be more difficult to do that than others. I’m not really going to set expectations for myself for Berlin, but of course, every race we want to go out and win so I’m going to do everything possible to prepare for that race and do that.”

One driver who gained experience racing at Berlin this year was Heim’s Venturini Motorsports teammate Jesse Love. Love finished sixth in the Money in the Bank 150 super late model race at the track earlier this year.

Finished the night P6 at Berlin Raceway! This is by far the hardest track we have ever raced at. Super proud of the Wimmer Motorsports team for working hard all day to dial the car in for the feature. Can’t wait to race with VMS later this year with in ARCA! #TeamToyota #Mobil1 pic.twitter.com/kbQAix0SdA

Lost amid the winning move at Elko was the fact that Venturini drivers finished 1-2-3. Heim won and Love and Gracie Trotter finished their main ARCA series a career-best second and third, respectively.

“After the season she’s had, she needed to get to the finish,” Krall told Campbell. “I told her right before the race [at Elko] started, ‘Gracie, you don’t need any good luck tonight. You just need to not have any bad luck.’ It finally worked out. Hopefully, that’s the kind of run that puts her to come out here [to Berlin] and contend for a win.”

In his first competition since he returned from an off-the-track injury, Taylor Gray finished fifth at Elko.

P5 at elko on Saturday. Felt like at the end we definitely had the speed to run 3rd maybe 2nd. Just have to improve next weekend. Thank you @dgr_racing @FordPerformance pic.twitter.com/QX4VsMsCHl

His David Gilliland Racing teammate Thad Moffitt finished ninth at Elko for his eighth straight top-10 finish this season. It could’ve been better though, as he spun out on the last lap racing Daniel Dye.

“We were racing hard for sixth place, and I guess he’s trying to prove something,” Moffitt told The Racing Experts post-race at Elko. “It’s alright, we’ll move on and keep our heads up from what happened here.”

Both Gray and Moffitt will make their first start at Berlin this weekend.

As for Dye, he chalked it up to hard racing, telling The Racing Experts, “It’s just racecar drivers trying to get every inch we could, and he ended up on the bad side. Sorry to him, it’s just an agreement to a disagreement.”

“Berlin can’t get here soon enough, another place I’ve never been to before but am anxious to figure out,” Dye said in a team release. He too will compete at Berlin for the first time in his career, so his fireworks with Moffitt may continue.

Another driver lost in the shuffle of that Elko race was Nick Sanchez, who finished sixth. It’s his seventh straight top-10 finish, but he left there dissatisfied with the handling of his No. 2 Chevrolet.

Of the 17 drivers entered for Berlin, none have won there previously.

Can anyone defeat Gibbs and Heim, or will their rivalry grow more as they race for the victory in this 200-lap race? There will be a 45-minute practice session followed by qualifying at this short track.

The Zinsser SmartCoat 200 will take place this Saturday (July 17) at 8 p.m. ET with TV coverage provided by MAVTV and available on TrackPass on NBC Sports Gold.

If Ty Gibbs is in the race with his Cup car his granddaddy provides him, I will not be watching the race.

Baby Gibbs got beat last week yet smiled during his post race interview. My guess is that someone spanked his naughty bottom recently. Glad to see some sportsmanship there for a change.