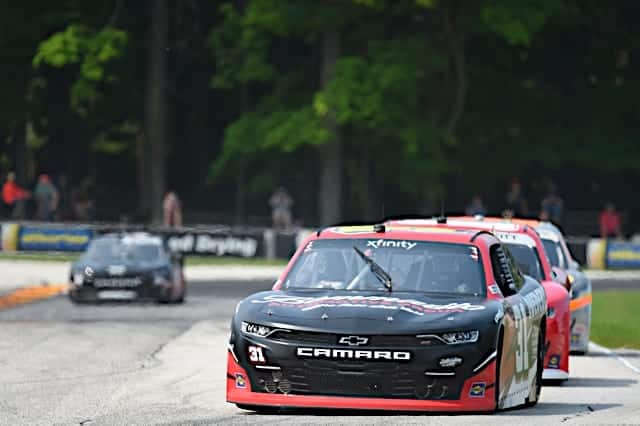 Jordan Anderson will admit that the itch to still get behind the wheel and drive is “still there.”

This weekend at New Hampshire Motor Speedway, Anderson gets a chance to satisfy that itch, getting behind the wheel of his own car for the second time this year in the Xfinity Series. The first time came in early June at Texas Motor Speedway. He also piloted his team’s NASCAR Camping World Truck Series entry in five of that series’ first eight races of the year.

“I’m looking forward to getting back behind the wheel, we’ll see how it goes,” Anderson said.

But Jordan Anderson Racing has hardly been on the sidelines as spectators this year. Rather, by using a handful of drivers with drive and determination to match the team’s described work ethic, steady results have been posted.

To do that, drivers have been leaned on to not only get solid results, but provide as much feedback as possible to make up for the disadvantages of not only a lack of practice time, but the limited resources of being a single-car operation.

The plan appears to be succeeding. Josh Berry, available by way of his previously scheduled races for JR Motorsports coming to an end for the year, rallied from outside the top 30 to race into the top 10 at both Mid-Ohio Sports Car Course and Pocono Raceway.

“It’s a big deal, putting a guy like me in these cars and giving me the opportunities, thankfully,” Berry said. “I feel like we over-performed (at Pocono).”

Last weekend at Atlanta Motor Speedway, Berry rallied from an early spin to finish on the lead lap in 23rd. Kaz Grala was 18th at Road America. In three starts, Tyler Reddick followed up an eighth-place finish at Circuit of the Americas with a fifth at Charlotte and 15th at Nashville.

“The biggest thing that Josh, Tyler, and Kaz have brought is just depth to our program,” Anderson said. “I hadn’t run an Xfinity car in three or four years. With no practice this year, we’re having to make the most of our starts and get some guys in our cars to really see where we stack up as far as how competitive we can be. They’ve definitely where we can do well at and how to make it better.”

There’s another common thread in all of those performances: that the car was brought home in one piece, a huge asset for a smaller race team. It’s something that Anderson, a nose to the grindstone driver himself, can appreciate, especially with Berry.

“You look at Josh, he has taken care of our equipment,” Anderson said. “The races he has run for us, the car’s come back clean, it’s been fun to work with him. Josh has kind of came up the way I have. He’s had to work for what he’s got, so he knows how to take care of and respect equipment. It’s been fun to get him in a ride.”

The satisfaction has rubbed off on the small but determined race team, a big pick-me-up after a rainout at Daytona International Speedway washed out qualifying and prevented the team from even having a chance to make the race.

“We have a great group of guys, it’s been cool to see them pull together and help make this happen,” Anderson said. “When we missed Daytona for the rainout, I grabbed all the guys, kinda had a pow-wow in the lounge, and said, ‘I don’t know what the future is going to hold, but you guys have a home here, you don’t have to worry about getting paid or anything like that. If you stick with me, I’ll stick with you.’

“We’ve got a pretty strong band of guys, It’s not just a job, they put a lot of heart and soul into this. You can tell with how nice the stuff is and how good of shape it is in when we come to the racetrack. It’s a small group of guys, and they overachieve for what we have.”

Much like drivers such as Dale Earnhardt Jr., going from a driver to an owner at times brings a different observation plane to watch from. It’s one that Anderson concedes does take adjusting to.

“I think it’s more stressful watching your car race than when you’re in it,” he said. “Because when you’re driving, you’re not thinking about these things. But you’re sitting there (as an owner), you are running all the scenarios through your head … how much it costs and all these other things through your head. For me, at least, it’s more stressful watching, but you give guys like Josh, Kaz and Tyler a chance to go out and perform it’s a real good feeling to see them finish well and see them deliver. It’s a different level of enjoyment, but it is kind of nice to sit back and see it pay off.”

This weekend, Anderson will look to make it pay off as a driver.

“This is a long-term goal to keep this thing going,” Anderson said. “Hopefully, I’ll get back in it and have Josh and Tyler back in and take it one race at a time.”

Busch is gone. Now what?

Few things in the NASCAR Xfinity Series are as polarizing as Kyle Busch. Some will miss him being out on the track on Saturdays while others are lamenting that same fact. You won’t see him in an Xfinity race the rest of this year and, at least for now, maybe not ever again. I wouldn’t be stunned, however, if some one-off deals come up. Maybe a team gets in a pickle such as JR Motorsports at AMS in need of a very last-minute substitute driver. Perhaps a driver like Ty Gibbs attracts a sponsor under the condition that Busch runs a single race for them. As they say … never say never.

The fact is this. Drivers in this series need something to chase, a measuring stick to strive for. Kyle Busch provided just that and will be missed.

Annett’s absence is others’ gain

This week’s entry list already lists Berry filling in for Michael Annett as he’ll be recovering from surgery for a stress fracture on his leg. Thankfully for JR Motorsports, there’ll be no last-minute driver sub this week, so go ahead and put those Dale Jr. in the No. 1 car dreams to bed.

What there will be is a huge opportunity. Annett sits 10th, 59 points in front of Riley Herbst in 13th and 61 head of Brandon Brown. Until Annett comes back, the chance to make up points and possibly pass Annett is there for the taking.

Brown has a very slight edge experience-wise this weekend with three combined starts in the Xfinity and Truck Series at New Hampshire to the none for Herbst.