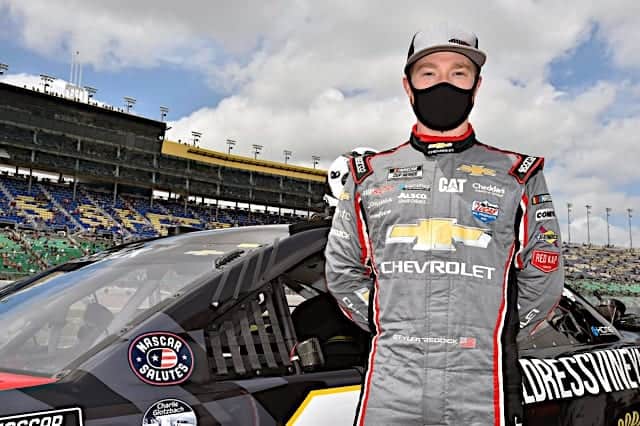 Should NASCAR continue to schedule back-to-back off-weekends in the late summer even when no Summer Olympics are being held?

Trenton Worsham: Not back to back, but it’d be nice for it to have two or three more weeks off scattered out throughout the year as bye weeks.

Josh Roller: I like the idea of a late summer break for NASCAR. The season is long and compact, and sometimes having only a single weekend off probably doesn’t seem long enough for those who travel to all the races. Having back-to-back weekends off gives the entire industry time to plan a vacation or family time, home improvements and, in general, extended time away from the track. Formula 1 has scheduled a summer break for years and includes a shutdown of team factory activities. I don’t see NASCAR reducing the length of the schedule, so having a back-to-back weekend break is a recent change I would like to remain.

Frank Velat: No. I would rather see the season end two weeks earlier, and I can’t imagine I’m alone with that sentiment. The less we keep going head to head against the NFL, the better. Hold a few more doubleheaders and no two-week hiatus and we might be able to wrap things up by the end of September.

Luken Glover: There are no signs of a shortening of the schedule, and new tracks are a definite possibility, increasing travel. The summer break is a good time for the industry, teams and drivers to all debrief and gain some rest and enjoyment. The four stick-and-ball sports in America are always compared, but once again, NASCAR is unique in its own way in that it has the longest season. A summer break allows everyone to accomplish things they’ve been wanting or needing to do. On the humorous side, it lets fans get a break from the stress of rooting for their favorite driver each week.

Jared Haas: No. While NASCAR does not have to compete with ratings with the Olympics, the flow season is disrupted by the two weeks especially during this part of the season with the regular season winding down. After the two weeks off, there are only four more weeks before the playoffs, which is similar to MLB taking two weeks off in September during the playoff push. It does not make sense to have back-to-back off-weeks, as the flow of racing is disturbed. A week off during the summer months can recharge a team, but two weeks in a row feels off.

Tyler Reddick finished in the NASCAR Cup Series top 20 for the 15th race in a row at Atlanta Motor Speedway. Will he win this season?

Velat: No, but it’s certainly not because I doubt his ability. The main obstacle for Tyler Reddick is the group of guys who also haven’t won in 2021, particularly Denny Hamlin and Kevin Harvick. I have a very hard time believing that either will finish the year with a zero in the win column. Coupled with the win hogging going on at Hendrick Motorsports, it doesn’t seem like there’s going to be enough left for Reddick to get his. Next year, expect that to change.

Roller: There are a few tracks remaining this season Reddick has performed well at: Darlington Raceway, Richmond Raceway, Kansas Speedway and this weekend at New Hampshire Motor Speedway. Chevrolet is fast right now, but Richard Childress Racing is just a step or two behind Hendrick. If circumstances fall right, Reddick can win at one of these racetracks, particularly if his team can be top five for the majority of the race. Then of course there is Daytona International Speedway and Talladega Superspeedway remaining, and those two races are anyone’s to win. That said, Reddick will have to wait until 2022 to get his first Cup victory.

Worsham: He certainly has a shot to win this year. As he currently runs, I’d say no, but as the team improves and kicks off the playoffs, there’s certainly a chance he can hit it right and win.

Haas: If Homestead-Miami Speedway had two races this season, Reddick would be a favorite to win, but there is no other track for him like that. The top-20 streak has helped Reddick to be in a position to make the playoffs. But while Reddick is on the playoff bubble, there is a chance that he gets knocked by someone like Ricky Stenhouse Jr. winning at Daytona. Chevy has improved, but it is going to be hard for Reddick to find victory lane with Hendrick as a roadblock.

Glover: The speed of Hendrick, Joe Gibbs Racing and even Team Penske makes it much tougher for Reddick to earn a win. However, RCR has steadily improved over the last two seasons, and we saw what Austin Dillon did in the first few races of the playoffs last year. I’m going to have to say Reddick doesn’t get that first win in 2021, but don’t be surprised if he breaks through at Darlington.

Do you have any objections to a driver trying to help their teammate win by impeding a competitor?

Roller: In a general sense, no. Most if not all successful or moderately successful Cup drivers have done something similar at one point. That assistance may not have been for the lead, but all drivers are guilty of at least something similar to what Ross Chastain did last weekend at Atlanta. I do not have a problem with what Chastain did at all. Now, if teammate Kurt Busch had been third instead of second, that may have been a legitimate complaint from Kyle Busch. But what Chastain did was being a great teammate and big-picture thinking, and it added a layer to the race’s discussion.

Haas: Teammates help each other all the time in sports, and Atlanta was no different. It happens all the time at superspeedway races. If Chastain wrecked Kyle Busch, that would be a different story, but that did not happen. On a scale of one to Spingate, this is a two on how much it affected the outcome of the race. Kyle Busch had time to pass Kurt Busch after dealing with Chastain. Understandably, Kyle Busch was frustrated that the track and package made clean air valuable to not catch back up. Considering both Chip Ganassi Racing drivers could be free agents at season’s end, Kurt Busch and Chastain proved to Trackhouse Racing Team that both can work together for a common goal to win.

Glover: There is a fine line between team assistance, but I rarely have issues with it. What we saw at Atlanta isn’t the first time that has happened, nor will it be the last. First off, Chastain was trying to stay on the lead lap in his own right, especially being a bubble driver. Secondly, the No. 1 team asked Chastain to give it the bottom, where Kurt Busch had been strong all day. Chastain did exactly that, and Kyle Busch got stuck on the high line. We saw Kyle Busch try to help Xfinity Series teammate Daniel Hemric the day prior, which resulted in a crash. Chastain did nothing wrong, simple as that. It’s situations like the 2013 Spingate or the 2019 Homestead manipulation that cross the line, but we mostly do not see that.

Velat: I don’t personally have any objections to it. I mean, isn’t it almost expected to an extent? The gray area is pretty big here, but if multiple team cars can line up at Talladega to occupy an entire lane of traffic, there’s no reason for one not to play the part of a rolling roadblock to get a team car in victory lane. I really didn’t have an issue with Clint Bowyer’s actions during the whole Spingate thing. A team leader telling someone to do that is a little blatant but it’s closer to strategy than it is manipulation.

Worsham: They’re teammates. I’d expect a driver to help the other out if one isn’t in contention of winning, aside from superspeedways, where you need one to draft with.

The Xfinity playoffs may be shaken up with Michael Annett’s recent injury. Will this cause him to fall out of the top 12? If so, who replaces him?

Glover: It would not surprise me if Michael Annett fell out of the top 12 in points, but I do not expect him to stay there. It will certainly benefit Jeremy Clements, who is just inside the playoffs at the moment. As for Brandon Brown, it is a new opportunity to pounce. Brown should not be counted out to go get it, as he has outperformed his equipment and expectations numerous times. While Annett has never set the world on fire, he has good equipment and enough to outpoint Brown. New Hampshire is expected to be the last race from which Annett is absent. I just don’t see the gap being enough for Brown to overcome or maintain.

Velat: He’s got a waiver in hand already but hasn’t shown a propensity to run up front this season. So I’m going to say he won’t be participating in the 12-driver championship battle. As for who gets the spot, it’ll probably be a two person duel between Brown and Riley Herbst. The two drivers are almost polar opposites in terms of their situation and driving style. Herbst is an aggressive competitor on a well-funded organization while Brown drives for his family team and has a reputation for taking care of his equipment. A guy like that will give himself a good shot, and I see Brown getting the playoff berth.

Haas: Magic number is 59. Annett is 59 points ahead of Herbst, who on the outside looking in. While Brown is not too far behind Herbst, Herbst is more likely to leapfrog Annett if he is injured for too long. A driver that is lower in points could win, but it would not be likely to happen. Even though Annett is going to miss two races minimum, time is on Annett’s side to heal his leg, as the next race will be in August. If Annett returns by the break, he can hold the spot, but any longer and he will not have enough points.

Roller: With Annett missing two races in a row, that is going to be a gift to Clements and Brown. There are eight races remaining in the Xfinity regular season — plenty of time for shakeups — but Brown has better race result consistency than the other drivers on the outside looking in. He has a knack for finishing higher than he ran during the course of the first three quarters of the race. When compared to Herbst and Ryan Sieg, those two have lacked in pit strategy and late-race speed when compared to Brown. If Annett misses the playoffs, it will be because Brown passed him in points.

“I really didn’t have an issue with Clint Bowyer’s actions during the whole Spingate thing.”
Really Frank? Is that a misprint or typo?
That went way over the line for the type of assistance I am willing to put up with. Making it hard for someone to pass, reasonable blocking, racing hard are all legit, but purposely bringing out the caution crosses my line.

Yes, Nascar should take a summer vacation and let the teams and drivers run the two races while Nascar is gone.

Velat must be drinking. Uhhh, that’s really a ridiculous thing to say.