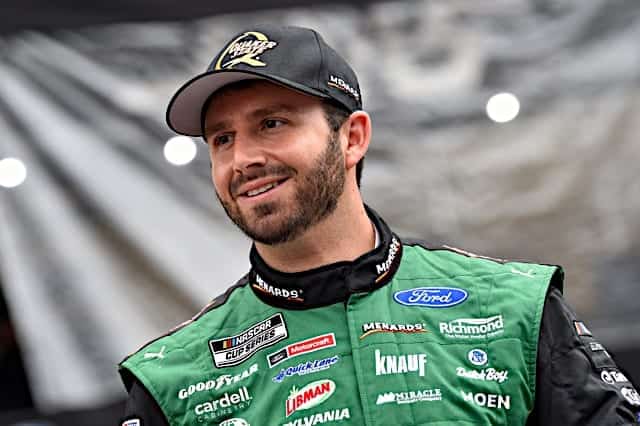 The news finally broke this morning: Matt DiBenedetto is indeed a free agent.

DiBenedetto will not return to Wood Brothers Racing’s No. 21 in 2022, with Harrison Burton driving the car in the NASCAR Cup Series after this season. His original replacement, Austin Cindric, will move to Team Penske’s No. 2.

After the news came out, DiBenedetto shared his thoughts on being replaced in the No. 21 Wood Brothers Racing Ford for next year with SiriusXM.

“I got the call about 5-5:30 p.m. ET here last night from the Team Penske side,” he said. “It’s a tough situation. Those are the phone calls you don’t want to get and they leave you with a feeling that’s hard to describe. I have now to go tell my wife about it, then tell my family. Those are the things you don’t really wish on anybody.

“I was just at a loss for words. I didn’t sleep very well last night and I woke up feeling pissed off, angry, bitter. It’s OK to have emotions. We’re human at the end of the day. That’s what it is sometimes. I’m not fake and I never will be and I’m respectful to everybody.”

You guys probably saw. I got the news that I’m a free agent yet again. No hiding my feelings here

“Anger is one of the emotions I have, bitterness all that, but as you said, it’s not toward anybody, it’s towards the situation,” DiBenedetto said July 15. “Like I said in the video a little bit, I’ll preface this with something of the things most important to me. People should not bash the Wood Brothers — they are family and always will be. There are a lot of people that go into this decision-making process, so the same goes for Harrison Burton and the Burton family. I never want to see that and social media is a place where people can say awful things. People can definitely share and feel the emotions I have. I have a very dedicated following and I’m super appreciative of that.”

DiBenedetto is currently 18th in Cup points with two top fives and five top 10s. He felt the change atop the No. 21 pit box with new crew chief Jonathan Hassler has made a significant difference.

“Our team finally has clicked,” he told SiriusXM. “It’s overdue. This sport is about performance, and I blame myself for some of it. I’ve expressed concerns and said, ‘Hey, our team is broken. It’s not working or clicking.’ I had a lot of concerns over the last year and change. Now we finally shook things up and, boom, light switch. We’re now going out there, kicking butt. Hassler’s doing great, our relationship has clicked. Now I finally feel like we’re in a position to go win.

“But at the end of the day, I guess it’s too late. Our opportunity here is over. It doesn’t make that part easy.”

DiBenedetto had hoped his option for next year would be picked up, but Burton will instead succeed him in the No. 21.

“I don’t know the reasoning for the decision exactly,” DiBenedetto said. “I’m not naive. If our team was clicking from the start, winning races and kicking butt, where we’re now off on speed, it just wasn’t there. We needed to fix our team to get better. That wasn’t the case this year. If we’re winning races and running well, I don’t think I’m replaced. It is what it is, I know it’s meant to be. I know God has a plan and I have to trust in it but it also doesn’t mean it doesn’t suck.

“I’m questioning why did it take this long to fix this team? It’s gotta work for everybody, it’s gotta click. That’s the part where I have to trust in my faith and know there’s a greater plan.”

As for the future, DiBenedetto has one goal in mind: win the 100th race for the Wood Brothers organization.

“Plan A is to kick butt and show what our team can do now that we’re firing on all cylinders,” he said. “Hopefully, this shows the team is more than just the driver on the racetrack — it’s a whole team effort. The rest will take care of itself now that we’ve got our team on track. As far as next year’s plans, what do I do now, I don’t know. I’m lucky and fortunate we do have a good bit of season left. It’ll be time to explore; there are still some dominoes left to fall. I’m here to win in the Cup Series.”

DiBenedetto prefers to do most of the talking to team owners and prospective sponsors, though he said he has a close personal friend who helps him out on the business side of racing. Now that a decision has been made regarding the driver of the No. 21, DiBenedetto is free to talk to other teams.

As silly season progresses, questions arise as to which team has an opening for DiBenedetto. DiBenedetto is still in search of his first national NASCAR series victory, though he doesn’t believe he needs to compete full time in the NASCAR Xfinity or Camping World Truck series next year.

“No, I wouldn’t want to do that,” he told SiriusXM. “I know I belong in the Cup Series. I know I can win in the Cup Series and I’ve had to climb the ladder the old school fashion way, which I’m grateful for.”

Matt, the fact is the Woods Bros. are no longer a top tier team. But you under achieved too. 1 runner up at Bristol 2 years ago will only go so far. Your best hope is 23-11 now.

The chemistry was getting better and with that, the performance on the track. However, I believe this is it for Matty D. Penske wanted to go young and that’s what they’ve done.

Matt turns 30 in a week. Dang Penske is going young. Watch out Joey, your the old man at 31 lol

I like Matt, but he should have already been planning to move on at the end of the season. He knew his ride was over with the 21 car this season.

what does he expect? under achiever, talks a good game,thats as far as it goes

If he wouldn’t of made that bonehead move at Talladega this last spring, maybe he stays. He needs to work on his racing skills out here on a local short track, not his workout so much…+

Why the angst? He knew he was out of a ride for over a year.

I thought the same thing. At best he had a 50/50 chance. I don’t understand how he could have been “lost for words” unless someone had told him something different prior to the announcement (which doesn’t seem to be the case).

Christopher
Reply to  Bill B

It would appear he wasn’t preparing for what was known. A good example of somebody not following the old maxim of hope for the best, prepare for the worst.

I’m old so maybe my views are ancient. This guy needs a sugar daddy., he’s good but not a pretty poster boy. No crying in NASCAR. He’s gone farther than anyone expected and who ever drives the Woods car isn’t going anywhere anyway. Money doesn’t talk it swears.