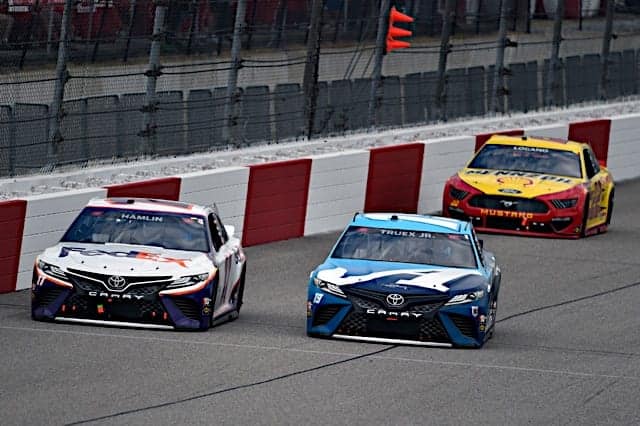 Teams have traveled to Loudon, a 1.058-mile racetrack, once a year since 2018, so there’s not as much recent data to study like at other shorter racetracks. However, it is comparable to Phoenix Raceway and Richmond Raceway, both shorter, flat tracks that typically produce long green-flag runs. You can also look at the other smaller courses like Martinsville Speedway and Dover International Speedway, as cars were equipped with the low-downforce, higher-horsepower package at those events.

When choosing players for your daily fantasy pool, keep in mind that the NHMS race winner has not started outside the top 19 since 2012, 13 races ago. Also, the victor began on the pole once, three times in the top five and seven times in the top 10 during that span. Now, the winner doesn’t always lead the most laps, as Kevin Harvick only led 41 en route to his 2019 victory. Still, it’s always helpful to have the winner in your lineup, as it produces highest base score on DraftKings (and FanDuel, for that matter).

Before I share my picks for New Hampshire, here’s how last week’s picks did from Atlanta Motor Speedway.

Ouch. You know you’re having a bad day when your highest-scoring driver is Austin Dillon with 33.35 fantasy points. Once Daniel Suarez was involved in a wreck not of his making, the lineup lost any shot to cash in with a race that had little-to-no attrition.

The best Atlanta strategy appeared to be a mixture of drivers good at 1.5-mile speedways and those who do well at high tire-wear tracks. The best-scoring lineup in the $1 Happy Hour tournament was 376.55 and featured the Busch brothers Kurt and Kyle, Alex Bowman, Martin Truex Jr., Tyler Reddick and Corey LaJoie. On the lower end of the spectrum, the minimum cashing score in the tournament was 209.1; in the single-entry double up, 176.6 fantasy points were needed to win.

Hamlin has the best average finish at NHMS among active drivers who have made more than one Cup start (sorry, Cole Custer). He has three victories at Loudon, and though his last win came in July 2017, Hamlin still has back-to-back runner-up finishes in the last two races. He’s also led 205 total laps in 2019-2020 and notched 105 total fastest laps.

Somehow, the No. 11 Joe Gibbs Racing driver who won seven events in 2020 has yet to find victory lane this season. But Hamlin has been able to stay atop the point standings and earned 11 top fives and 14 top 10s in 21 events. He nearly won at Pocono Raceway but had to pit for gas on the final lap. In April, Hamlin took home third place at Martinsville and second at Richmond after leading over 200 circuits in each race. He also was third at Phoenix and led 33 laps there as well.

Although Hamlin hasn’t led that many laps since Talladega Superspeedway in the spring, he still should have a fast car at Loudon Sunday. Get him on your roster.

Since his last win in 2014, Logano has had just two results outside the top 10 at New Hampshire, and only one was in the 30s (in 2017). During that stretch, he earned five top fives and eight top 10s in those 10 races, including a fourth place last year. Unfortunately, he’s only led one lap the past five seasons (2019) so Logano’s unlikely to dominate at the Magic Mile. He did at least have 16 fastest laps in last year’s event.

The No. 22 Team Penske pilot has performed well at the shorter, flat tracks this season; he was second at Phoenix and third at Richmond after leading 143 and 49 circuits, respectively. Logano was also fifth at the Monster Mile, though he didn’t lead any laps there. Like Hamlin, Logano hasn’t shown as much speed lately, but his results at the 1-mile or less tracks indicate that he’ll finish well on Sunday. Plus, he’s starting 15th and could earn you some position differential points on DraftKings.

Hamlin’s JGR teammate begins on the front row and could lead laps if he gets ahead of Kyle Busch at the start. What was intriguing to me was his salary on DraftKings; Truex has won three times and has 11 top-10 finishes so far this year, so why is he this low? Plus, he has two straight top-10 results at Road America and Atlanta Motor Speedway, ending in third place last week.

The tracks where the No. 19 has won this year were all at ovals using the 750 horsepower package — Phoenix, Martinsville and Darlington Raceway. Truex dominated in the latter, holding the top position for 248 circuits.

Though he’s yet to earn his first lobster at Loudon, Truex has six consecutive top-10 results. Four of these were top fives, including a third place last year. He’s also led over 100 laps in four of the last seven races, plus 83 additional laps in 2018. If Truex can return to his dominating performance, he would be a great play for your DraftKings lineup.

DiBenedetto just received the news that he will once again be a free agent next year, as Harrison Burton will hop in the No. 21 Wood Brothers Racing car. DiBenedetto might be extra hungry to prove himself this week, which could lead to some additional aggression.

DiBenedetto hasn’t had very many good outcomes at Loudon, mostly because he raced for underfunded teams. However, he found something in the last couple of years that helped him earn a fifth in 2019 and a sixth in 2020.

So far this year, Matty D has two top fives and five top-10 finishes. DiBenedetto gained six positions to end 14th at Phoenix, 10 spots en route to 12th at Martinsville and seven positions to a ninth at Richmond. Two of these were with his old crew chief Greg Erwin, but one was with Jonathan Hassler, his current head wrench. DiBenedetto has felt like something clicked with the team after the change was made and brings the momentum of two straight top-10 finishes into the weekend.

Look for him to get another good result at New Hampshire.

Dillon is starting one spot ahead of DiBenedetto in 13th, but that’s alright for me. He’s been fairly consistent this season, finishing 14th or better in all but one event since Dover. This kind of steadiness has kept his starting position further up in the field, which somewhat limits the amount of position differential points he could get. However, as long as Dillon continues to run this well, he’ll keep scoring in the 30s or 40s.

The No. 3 Richard Childress Racing driver doesn’t have as many good results at New Hampshire lately, but he did pass 10 cars en route to 13th place last year after leading three laps. Dillon also has a top 10 back in 2015, with most of his finishes since then in the teens. He’s not the flashiest one on this list, but you could do worse.

Wallace has only had three career Cup starts at NHMS, earning finishes between 22nd and 24th. His results this year, though, are what caught my eye, especially at the shorter racetracks. He gained nine positions at Phoenix to end 16th and duplicated that at Martinsville. Then, at Dover, the No. 23 pilot finished 11th after starting 22nd. He just earned his first top five of the year three weeks ago at Pocono Raceway and could use another good finish this week at New Hampshire. Hopefully, he’ll drive from his 18th starting spot to 11th or further up the grid.

Matt dibenedetto is a great driver .If he had a competitive car he would win a lot of races!