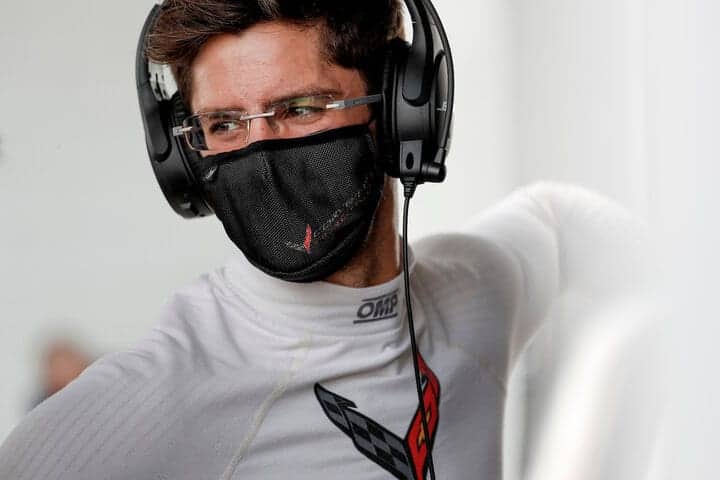 LAKEVILLE, Conn. – Corvette Racing’s Jordan Taylor won the pole Friday afternoon (July 16) for Saturday’s Northeast Grand Prix at Lime Rock Park with a lap at 106.217 mph.  Taylor’s pole lap is the only lap of the weekend run in under 50 seconds, but it is still seven-eighths of a second off of the class record.

In GT Le Mans qualifying, the pole rotated between Taylor, teammate Tommy Milner and WeatherTech Racing’s Cooper MacNeil.  Taylor set the time that ultimately earned him the overall pole near the midpoint of the session.

Just after that time was set, MacNeil spun in turn 3 on his own near the midpoint of the session and proceeded to get himself stuck in the wet grass.  He was able to extricate himself, but not before bringing out the red flag.  As a result, MacNeil lost his two fastest laps.

Once the session resumed, Taylor continued to try to improve his times, but was unable to do so.  His early lap held up to give him the pole.

Taylor’s lap was one-seventh of a second faster than Milner.  MacNeil’s best lap was one-third of a second off of Taylor.  However, losing his two best laps meant that his final lap is the lap of record for him, seven-eighths of a second back.

In GT Daytona, The Heart of Racing’s Roman DeAngelis earned his first career class pole with a lap at 102.581 mph.  DeAngelis’ lap was four-hundredths of a second faster than Vasser Sullivan’s Aaron Telitz.  CarBahn Motorsports with Peregrine Racing’s Richard Heistand will start third in his Audi, followed by Frankie Montecalvo in the second Lexus.  Paul Miller Racing’s Madison Snow will start fifth in class.

The Northeast Grand Prix is scheduled to go green at 3:10 p.m. ET Saturday afternoon.  The race will be streamed live on NBCSports.com and NBC Sports’ TrackPass service.  There will be tape-delayed coverage of the race on NBCSN immediately following coverage of the Xfinity Series Ambetter Get Vaccinated 200 from New Hampshire Motor Speedway.