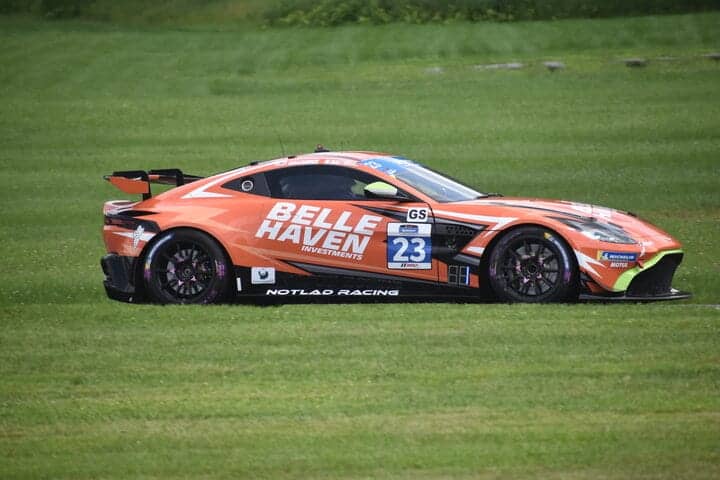 LAKEVILLE, Conn. – Notlad Racing by RS1’s Patrick Gallagher won the pole Friday afternoon (July 16) for Saturday’s Lime Rock Park 120, the sixth race of the Michelin Pilot Challenge season, with a lap at 98.333 mph.  It is the team’s first pole of the year in their third start.

“The Belle Haven Investments Aston Martin’s been great,” Gallagher told Frontstretch after qualifying.  “Job No. 1 of the weekend is done.  I’m sure it’s going to be a dogfight to the finish tomorrow, but certainly good to start up front.”

What was unusual about this session is that there was only six minutes of qualifying.  At that point, Wright Motorsports’ Ryan Hardwick lost control of his Porsche right after cresting the hill at the exit of the Climbing Turn.  Hardwick spun across the track and went hard into the tire barriers to bring out the red flag.  The session was unable to resume after that point.

In IMSA, qualifying sessions are generally 15 minutes in length per class, run as many laps as you’d like.  In the IMSA WeatherTech SportsCar Championship, there is a minimum of 10 minutes of green-flag action required for a qualifying session to be official.  If that amount is not met, then the starting lineup for that class is set by “other means,” which typically refers to by points.

Frontstretch sought a clarification of this rule in regards to Michelin Pilot Challenge since that 10-minute minimum was not met.  As it turns out, it is not actually a rule in Michelin Pilot Challenge.  If there is time for cars to go out on track, then IMSA will take the session results as official.  The only time that “other means” is used to set the grid is if qualifying is cancelled.

Prior to Hardwick’s crash, the 22 Grand Sport teams ventured out on track to turn in their best laps.  Had the session gone the full distance, they would have over a dozen tries to get their lap right.

Ultimately, Turner Motorsport’s Bill Auberlen was quick early on in his BMW.  However, Gallagher was able to set the pole-winning lap on his third lap at speed.  His lap was three-hundredths of a second faster than Auberlen, who made a rare qualification attempt as usually teammate Dillon Machavern qualifies the car.

In TCR, Copeland Motorsports’ domination of the speed charts from practice continued.  Tyler Gonzalez put the No. 27 Hyundai Veloster N TCR on the class pole with a lap at 98.159 mph, good for third overall.  Gonzalez’s lap was less than a tenth of a second off of the overall pole.

The Lime Rock Park 120 is scheduled to go green at 11:05 a.m. Saturday morning.  Coverage of this race will start at 11 a.m. ET on NBC Sports’ TrackPass service.