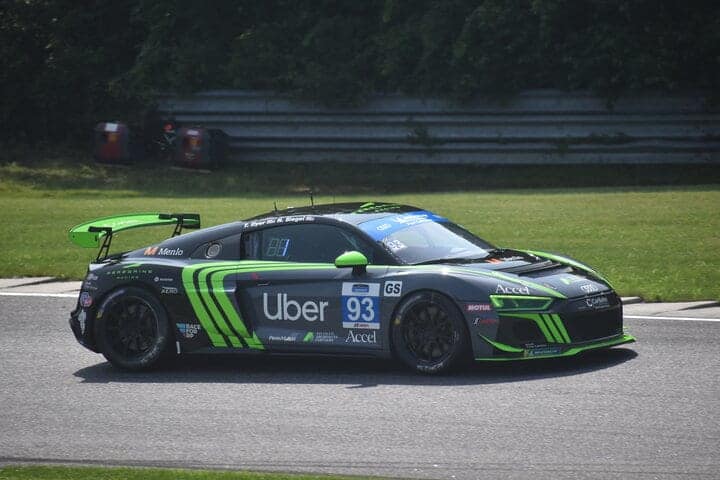 Friday morning saw clear skies and humid weather at Lime Rock Park.  Given those conditions, a number of drivers went out to set a quick time before it got too warm.

Dyer set his best lap at 98.257 mph just six minutes into the one-hour session.  It held to be the fastest lap of the session.

Dyer’s lap was three-hundredths of a second faster than the Chevrolet Camaro GT4.R of Rebel Rock Racing’s Robin Liddell.  Archangel Motorsports’ Trent Hindman was third in his Aston Martin, followed by Andrew Wojteczko Autosport’s Kuno Wittmer in the No. 13 McLaren.  Wright Motorsports’ Jan Heylen was fifth.

Murillo Racing’s Eric Foss was sixth fastest in the best of the Mercedes-AMG GT4s.  TeamTGM’s Owen Trinkler was seventh, then the Toyota of Riley Motorsports’ Scott Andrews and Matt Plumb in the second TeamTGM Chevrolet.  Sacha Fenestraz was 10th in his first Michelin Pilot Challenge on-track session.  The top 18 Grand Sport teams were within one second of Dyer’s best lap.

Lime Rock is probably the one venue on the Michelin Pilot Challenge schedule where it is possible for TCR cars to go head-to-head with Grand Sport/GT4 cars on equal footing.  The lap times for the best drivers were very close to the fastest Grand Sport teams.

Copeland Motorsports’ Tyler Maxson was fastest in class with a lap at 97.319 mph.  This lap was good enough for 10th overall and a little more than a half-second off of Dyer’s quick time.

Maxson’s lap was one-eighth of a second faster than CB Motorsports’ Trenton Estep.  The Audis of JDC-Miller MotorSports’ Mikey Taylor and Roadshagger Racing’s Jon Morley were third and fourth, while Rory van der Steur was fifth in his Hyundai.

There were two brief red flags late in the session.  First, CB Motorsports’ Mark Kvamme had an off-course excursion in turn 6 and stopped.  After a brief interruption, the session resumed.  A few minutes later, Copeland Motorsports’ AJ Muss had an off in the same place to draw another red flag.

The afternoon practice session was a start and stop affair.  Three red flags resulted in nearly one-third of the session spent with all the teams sitting in the pits waiting.

The worst of the incidents occurred 23 minutes into the session when Wittmer slid off-course in Big Bend and impacted the tire barrier with his McLaren.  The crash resulted in a 16-minute red flag.  We reached the scene of the incident a couple of minutes after it occurred.

Red flag in Pilot Challenge practice No. 2. 13-@KunoWittmer slid off course in Big Bend and impacted the tires. pic.twitter.com/nLT4hxFajS

Wittmer got out of the McLaren under his power and has since been checked and released from the Infield Care Center.  The Life Flight helicopter on-site took off shortly after the crash, leading many at the track to fear the worst at the time.  However, IMSA officials confirmed to Frontstretch that this was an unrelated departure.

Notlad Racing by RS1’s Patrick Gallagher was fastest in the session with a lap at 98.035 mph.  This was five-hundredths of a second faster than Plumb’s Camaro.  Turner Motorsport’s Robby Foley was third in his BMW.  Foss was fourth, while CarBahn Motorsports with Peregrine Racing’s Nolan Siegel was fifth.

Andrews was sixth, then Bill Auberlen in the second Turner BMW.  Hindman was eighth fastest, while Trinkler and McCann Racing’s Michael McCann Jr. rounded out the top 10.

In TCR, Maxson was quickest for the majority of the session, but Bryan Herta Autosport’s Ryan Norman set a quick lap at 96.754 mph, good for 14th overall for the Hyundai Elantra N TCR.  Norman’s lap was a mere two-thousandths of a second faster than Maxson.  Van der Steur Racing’s Denis Dupont was third, then JDC-Miller MotorSports’ Chris Miller and Copeland Motorsports’ Mason Filippi.

Despite being fifth in class, Filippi brought out the first of the three red flags when he slid off-course in turn 6 (West Bend), similarly to what his teammate Muss did in the first session.  The No. 51 Hyundai, sporting a new fluorescent orange scheme this week, was done for the session just 12 minutes in.

Qualifying for the Lime Rock Park 120 is scheduled to start at 4:20 p.m. ET Friday.  We’ll have a recap here at Frontstretch once it concludes.