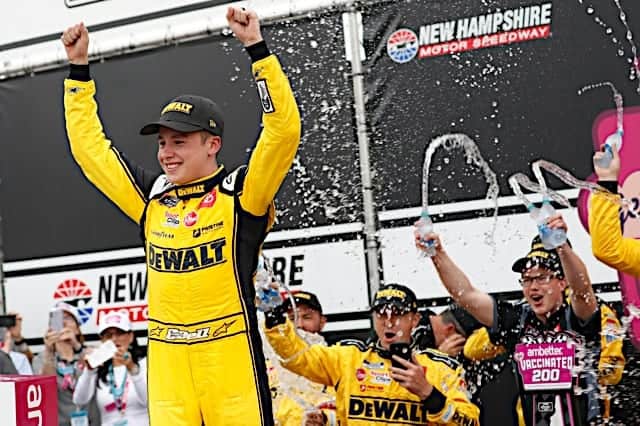 Ty Gibbs. Kyle Busch. Christopher Bell. It doesn’t seem to matter who drives the No. 54 Joe Gibbs Racing Toyota, it always seems to find its way to victory lane. Bell went undefeated at New Hampshire Motor Speedway Saturday (July 17) in the Ambetter Get Vaccinated 200 after sweeping the first two stages and coming away with the victory. Bell has won all three of his NASCAR Xfinity Series starts at New Hampshire.

There were also some questions going in after NASCAR decided not to apply the PJ1 to the racing surface, however, some exciting racing was produced through the field and Bell is the only Cup Series driver who was in the field to get some practice on the track before Sunday’s race.

He wasn’t challenged much throughout the Xfinity race with the exception of AJ Allmendinger, who was out front early on, and Justin Allgaier, who fought briefly for the lead in the final stage. However, the battle at the end of the race was between Allgaier and Daniel Hemric for second as Bell drove away with the win.

When asked if learned anything, Bell told NBC Sports “What I figured out is I got really, really fast race cars to drive, I just love being here with Joe Gibbs Racing. All these Supras I have the last three times I’ve been here have been amazing.”

His third-place JGR teammate Hemric said: “It was a solid day, we just had a good Toyota Supra. Not great, but good. We were a little off of the (No.) 54 the first 15 laps, and then my car would lock-in and we’d catch him the last 20 laps but we’d run out of laps and start again.”

The newly announced drivers to the Cup Series this past week in Austin Cindric and Harrison Burton brought home fourth and fifth. Justin Haley finished sixth with Myatt Snider in seventh. JR Motorsports’ Josh Berry, filling in for the injured Michael Annett, finished eighth. Rounding out the top 10 were Brett Moffitt and Riley Herbst, who spun earlier in the race and made a great recovery.

There were a few incidents that brought out the yellow flag during the event, including the aforementioned spin from Herbst. After the competition caution, the field stacked up on the ensuing restart and many had nowhere to go. Brandon Jones and Sam Mayer also were involved in this crash, suffering heavy damage to the noses of their cars. Jones’ team worked on the car in the garage, while Mayer had to retire early from the race.

Chaos on the restart at @NHMS!

Later, Tommy Joe Martins and Kyle Weatherman also crashed into the wall. The pair were racing next to each other when Weatherman slid up into Martins, collecting them both into the wall. Martins was not happy after the collision.

"What a fucking jackass. We're racing for what, 15th, on lap 40? @TommyJoeMartins adds. Not happy with Weatherman.

Martins’ team fixed the damage and he finished the race three laps down in 21st.

The points battles are also heating up with seven races remaining after the two-week break for the Olympics. According to a graphic from NBC Sports, Jeremy Clements is 50 points above the cut line, while Annett is 32 above. Herbst and Brandon Brown sit outside the cut line, 32 and 41 points back, respectively.

As the @NASCAR_Xfinity Series takes a three-week break, we've got just seven races remaining before the playoffs!

We'll see you on @CNBC on August 7th at 4P ET from @WGI! pic.twitter.com/uhUdcXOU71

After the break, NXS heads to Watkins Glen International on Aug. 7 at 4 p.m. ET, with coverage from CNBC.

How about Ty Dillon? Isn’t he a driver for the 54?