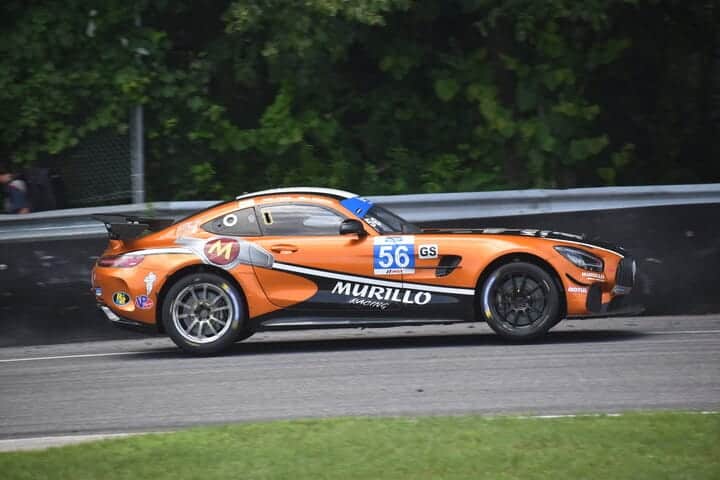 LAKEVILLE, Conn. – Murillo Racing’s Eric Foss took the overall lead away from FCP Euro’s Michael Hurczyn with 25 minutes remaining Saturday afternoon (July 17).  While Hurczyn held up the pack while trying to stretch his fuel to the finish, Foss pulled away from the field to give himself and teammate Jeff Mosing the victory in the Lime Rock Park 120.  It is the duo’s first overall victory after 5.5 years of racing in the Grand Sport class.

The early portions of the race were a stop-and-go affair.  Notlad Racing by RS1’s Patrick Gallagher led from the pole, but fellow front row starter Bill Auberlen made an error.  He switched lanes prior to the start-finish line, which resulted in a drive-through penalty.  That moved TeamTGM’s Hugh Plumb up to second in his Chevrolet Camaro GT4.R.

Then, the problems started.  First, JDC-Miller MotorSports’ Chris Miller spun in Big Bend after contact from KMW Motorsports with TMR Engineering’s Roy Block.  Block eventually received a drive-through penalty for the contact.  Copeland Motorsports’ AJ Muss and Van der Steur Racing’s Rory van der Steur both went off into the wet grass to avoid Miller.  Both cars ended up making significant contact.  Muss’ Hyundai nearly had the right rear wheel fall off, but he was able to drag it back to the pits.  Both Muss and van der Steur were effectively out on the spot.  In van der Steur’s case, he had qualified second, but lost that after failing post-qualifying inspection.   An excellent weekend was ruined.

Shortly after the restart, Motorsports In Action’s Sheena Monk tried to make a move on the outside in Big Bend around the Audi of McCann Racing’s Michael McCann Jr.  No contact was made, but Monk went wide into the grass and slid into the tires to bring out another yellow.  Monk was out on the spot due to steering rack damage.

Following additional spins for Alexandre Papadopulos and Vin Barletta, Rebel Rock Racing’s Frank DePew slid off -course and nosed into the tires to bring out another yellow.  All of these incidents occurred in the same corner.

DePew’s crash occurred after the 40-minute mark of the race, allowing everyone to pit for tires, fuel and a driver change.  Despite serving the drive-through penalty, Auberlen had worked his way up to sixth after exiting the pits in 25th overall.  That allowed Turner Motorsport to use some pit strategy.  A two-tire stop while switching to Dillon Machavern let the No. 95 BMW move up to the overall lead ahead of Stevan McAleer in the Notlad Aston Martin.

McAleer pressured Machavern for many laps after the restart before McAleer was able to make the pass exiting Big Bend with 55 minutes to go.  That advantage was short-lived as the final round of pit stops was quickly approaching.  The stops resulted in a number of different strategies being in play.  FCP Euro’s Hurczyn had made a second pit stop during the caution for the DePew crash.  The intention was to run the remaining 78 minutes to the finish from there, normally well out of the range of a GT4 car.

Hurczyn had a rather substantial lead over the rest of the field until a caution flew with 37 minutes to go when Bryan Herta Autosport’s Parker Chase appeared to cut his left front tire and slid into the barrier in the Climbing turn.

The yellow closed the pack back together and put HTP Winward Motorsport’s Alec Udell on his tail.  Udell could not get past Hurczyn, but a stackup occurred shortly after the restart on the frontstretch.  Foss made a during move to the inside of three-wide to move up to second.

Foss needed only a couple of laps to run down Hurczyn and overtake him for the lead with 22 minutes to go.  From there, Foss quickly expanded his advantage.  In three laps, he had a five-second lead over Hurczyn as Udell tried but couldn’t get past.  Eventually, McAleer was able to get by Udell and Hurczyn to get to second.  By that point, McAleer was eight seconds behind with 13 minutes to go.

Over the final laps of the race, McAleer was between one and three-tenths of a second faster than Foss.  However, the margin was simply too great to overcome as Foss and Mosing gave Murillo Racing their first v

Foss and Mosing’s margin of victory was 9.295 seconds over Gallagher and McAleer.  McAleer also indicated to Frontstretch after the race that the team plans to compete in all of the remaining Michelin Pilot Challenge events with the exception of the race at WeatherTech Raceway Laguna Seca in September.  Saturday’s race was their first two-hour event of the season.

Wright Motorsports’ Ryan Hardwick and Jan Heylen came from the rear of the class to finish third in their repaired Porsche, followed by Archangel Motorsports’ Alan Brynjolfsson and Trent Hindman.  Riley Motorsports’ Sacha Fenestraz and Alfredo Najri were fifth in their Toyota GR Supra GT4.

TeamTGM’s Hugh and Matt Plumb were sixth in their Camaro, then CarBahn Motorsports with Peregrine Racing’s Tom Dyer and Nolan Siegel after a late off-course excursion for Dyer.  Turner Motorsport’s Vin Barletta and Robby Foley were eighth, while Hurczyn and Nate Vincent ran out of fuel coming to the finish and were credited with ninth.  Ted Giovanis and Owen Trinkler were 10th in the second TeamTGM Chevrolet.

After the two early cautions, Henderson was able to work on Norman and eventually got around him 23 minutes in to take the class lead.  The third yellow resulted in a split strategy in the class.  TCR cars can easily run a two-hour race on one stop.  Because of this, Henderson chose to stay out while teams such as KMW Motorsports with TMR Engineering and JDC-Miller MotorSports stopped.

Henderson restarted with the lead with VGMC Racing’s Victor Gonzalez Jr. right behind.  Here, JDC-Miller MotorSports’ Mikey Taylor was able to quickly use his fresh tires to move up front and take the advantage away from Henderson.  Chase followed in his Elantra.

Meanwhile, Michael Lewis was on the move in his Veloster N TCR.  Teammate Taylor Hagler was quick in her stint, moving up into the top three before her time in the car ended.  After the halfway point, Michael Lewis was able to move all the way up to second prior to the caution for Chase’s crash.

The Chase crash resulted in a second round of stops for most of the TCR contenders.  This saw KMW Motorsports with TMR Engineering’s Tim Lewis Jr. moving up into the lead briefly before Taylor took it back.

In the final 10 minutes, Taylor ran up on the lapped car of Stephen Simpson.  This held up the pack.  Michael Lewis was able to get past Tim Lewis Jr., then got Taylor for the lead with seven minutes to go.  From there, the Lewises had to race each other for the lead.  Coming to the finish, Tim Lewis Jr. looked to the inside of Michael Lewis, but could not prevent Michael Lewis and Hagler from taking their first win of the year.  For Hagler, it is her first career victory as a professional racer.

Michael Lewis and Hagler’s margin of victory was a mere 0.134 seconds over Tim Lewis Jr. and Block.  The two drivers were on the lead lap for the whole race and finished eighth and ninth overall.

Gonzalez and Tyler Maxson recovered from their early penalty to finish third, best of the Hyundais.  Taylor and Miller finished fourth, while Bryan Herta Autosport’s Harry Gottsacker and Mark Wilkins were fifth.

Atlanta Speedwerks’ second entry for Ryan Eversley and Scott Smithson earned a moral victory just by starting the race.  Smithson crashed in the final practice session Friday, forcing the team to go to a backup.  It was an all-night thrash to just race at all.  They made the start with a somewhat compromised car, but missed the pre-grid.

Rough start, we barely made it to the grid on time but we DID make it. Our car doesn’t have ABS and it doesn’t have “No lift shift” so our pace will struggle unfortunately. Going for points!

The penalty effectively put the team a lap down at the beginning of the race.  From there, Everlsey and Smithson raced the car to an eighth-place finish.

The Lime Rock Park 120 is available to view in full if you have a subscription to NBC Sports’ TrackPass service.  If not, delayed coverage of the race is scheduled to air after the Olympics on NBCSN, Aug. 10 at 1 p.m. ET.  IMSA Michelin Pilot Challenge teams will take a couple of weeks off before their next race, the Road America 120, at Road America in Wisconsin on Aug. 7.