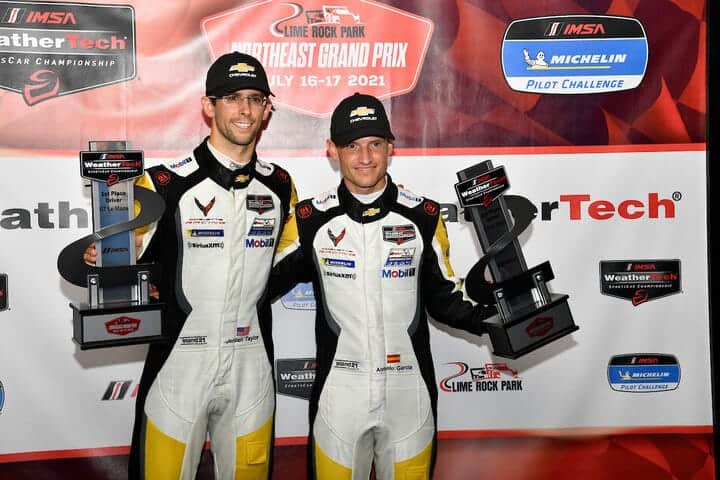 LAKEVILLE, Conn. – Corvette Racing’s Jordan Taylor and Antonio Garcia led every lap Saturday afternoon (July 17) to win the Northeast Grand Prix at Lime Rock Park.  The race, originally scheduled for 160 minutes, was shortened to just 88 minutes due to lightning strikes in the vicinity.

“It was odd.  We kind of knew what was going to happen going into it,” Taylor said in the Media Center after the race.  “We knew it was going to be a race of tire degradation and strategy, whether it be a two-stop or three-stop race just looking at the history of the race.  20 laps in, we knew it was going to be a three-stop race doing 45-lap stints.  It was about fuel mileage, saving tires and getting through traffic cleanly.  Thankfully, we executed well and the driver change went well.  We knew the weather was imminent at some point and that it could be red-flagged, so we knew track position was going to be important.  Thankfully, we were out front when that came.”

The race started under hot and humid conditions, but with no rain.  Taylor was able to pull out a lead on teammate Tommy Milner almost immediately.  Further back, Cooper MacNeil was not on the pace of the Corvettes and dropped away.  However, once Mathieu Jaminet got in the car, the Porsche was very stout.  Jaminet ended up with not only the fastest lap of the race, but he turned in the fastest time of the entire day in all three sectors on-track.

Unlike the GT Daytona cars, GT Le Mans cars cannot go that far on fuel.  As Taylor noted above, their plan was to split the race into quarters and pit every 45 laps.  That assumes a race distance of 180 laps, which is right on average for the past three races at Lime Rock.  It also provides wiggle room if the race went more than 180 laps.

Ultimately, that was not the case.  Taylor pitted at the end of lap 93, just past the halfway point, for fuel and to hand over to Garcia.  Garcia was able to beat Nick Tandy out of the pits and hold onto the lead.

By this point, skies were beginning to darken around Lime Rock.  There had been a couple of sprinkles early in the race, but nothing that would have changed track conditions.  Just five laps after Garcia got in the car, IMSA threw a full course yellow due to the weather.  Lightning had struck within eight miles of the track.

After a couple of laps under yellow, IMSA brought the field onto pit road, threw the red flag and advised everyone to seek shelter.  IMSA’s rules pertaining to lightning are basically a carbon copy of NASCAR’s.  In order for a session to restart, there cannot be a strike within eight miles of the track for 30 minutes.  If there is one, the clock resets to 30 minutes.  A similar instance happened two weeks ago at Watkins Glen during the race, but that race was able to resume.

Unfortunately for race fans, Lime Rock Park is not Watkins Glen International.  The track is located in a small, affluent community with neighbors that are opposed to any more action at Lime Rock than necessary.

A quick primer on rules governing @limerockpark. The track is not allowed to run anything on Sunday and hasn't been able to since the earliest days of racing here. In addition, on-track operations are restricted to between 9 a.m. – 6 p.m. No exceptions.

One of those neighbors is Trinity Church, located literally right across Lime Rock Road (Connecticut State Route 112) from the start-finish line.  They protested racing on Sundays back in 1959, resulting in the local government banning it.  The rules do significantly limit what Lime Rock Park can do.

In situations where lightning significantly delays a race, IMSA does have rules that allow a race delayed by lightning to have the clock stop in order to have a certain amount of actual racing.  This happened during last year’s Advent Health 120 at Sebring.

However, the aforementioned drop-dead time of 6 p.m. ET effectively prevented this from happening Saturday.  Had the lightning never arrived, the race was originally scheduled to finish at 5:50 p.m.  There was essentially no margin for error.

While teams sat on pit road, it never really rained all that much.  There were large raindrops at times, but it was mostly sunny outside.  Unfortunately for race fans, continued lightning strikes kept resetting the clock until IMSA was forced to call the race, giving the victory to Taylor and Garcia.  It was only after the race was called that the clouds closed in and rain truly started falling.

The timing of the red flag caused quite a bit of consternation for teams due to drive time regulations.  IMSA had to make a rules exception due to the fact that so many teams had just put drivers in their cars right before the lightning red flag.  Effectively, the requirements did not apply, meaning that no one will be penalized because of the situation.

The official margin of victory for Taylor and Garcia was 18.134 seconds over Milner and Tandy.  MacNeil and Jaminet were third.

In GT Daytona, Roman DeAngelis led from pole in his Aston Martin.  He was able to open up a small gap over Vasser Sullivan’s Aaron Telitz and put himself in a comfortable position.

Further back, a duel broke out over fourth in class between Frankie Montecalvo in the second Lexus and Paul Miller Racing’s Madison Snow.  Montecalvo went too fast into the chicane and went wide, opening the door for Snow.  Montecalvo then squeezed Snow, which allowed PFAFF Motorsports’ Zacharie Robichon to blast past both of them and take fourth.  Turner Motorsport’s Robby Foley was there as well and went from seventh to fifth.  That meant that Snow’s move for fourth ended up being a net loss of one position and contact with Foley resulted in loose bodywork.

The first round of stops began 45 minutes into the race and saw nearly all of the teams make their driver changes.  Ross Gunn got into The Heart of Racing’s Aston Martin and was able to regain the lead once the stop sequence ended.  Paul Miller Racing had a quick stop that allowed Bryan Sellers to get right up to Gunn’s rear bumper in second after starting the sequence in sixth.

The difference?  Snow was the first to stop.  Sellers had fresh tires for a couple of laps more than everyone else.  Fresh tires at Lime Rock are worth a second a lap or more.  The pole in GT Daytona was 51 seconds a change, so a second a lap means more at Lime Rock than anywhere else IMSA goes.

With a tire advantage over Sellers, Gunn was able to pull away from Sellers’ Lamborghini.  He then held on until the caution for lightning came out.  When the race was not restarted, DeAngelis and Gunn ended up with their second win of the year, but the first one that counts towards the full-season GT Daytona championship.

DeAngelis and Gunn’s margin of victory was 4.015 seconds over Sellers and Snow.  Telitz and Jack Hawksworth were third in their Lexus, followed by Robichon and Laurens Vanthoor.  Foley and Bill Auberlen were fifth.

All five classes in the IMSA WeatherTech SportsCar Championship will be back in action at Road America on Aug. 8 as part of the track’s IMSA Sports Car Weekend.   That race will be streamed live on NBCSports.com at 2:40 p.m. ET.  Same day tape-delayed coverage will air on NBCSN at 8 p.m.