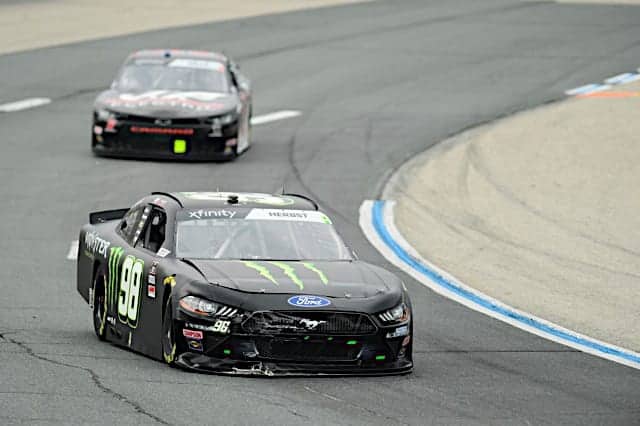 Riley Herbst’s season has been full of misfortune.

The No. 98 team couldn’t escape that at New Hampshire Motor Speedway on Saturday (July 17) — not until he bounced back for his third top-10 finish in the past five races.

On a lap 26 restart, Herbst was the victim of an accordion effect that trickled through the field, turning Herbst’s Stewart-Haas Racing Ford nose-first into the inside wall.

Chaos on the restart at @NHMS!

But as miserable as Herbst’s luck has been, there was a silver lining Saturday: the No. 98 team rallied for a 10th-place finish, its sixth this season. Meanwhile, others in the crash like Sam Mayer and Brandon Jones were unable to continue.

Herbst saw the bright side glimmer, but just barely. The disappointment was still strong as he exited his Monster Energy Ford.

“It was alright,” Herbst told Frontstretch. “I mean, the clip’s probably moved up an inch, so finishing 10th with that, it’s alright. That just shows we probably should have ran top three today. Just frustrating. It’s our whole year — frustrating. We have speed and we can’t finish.”

Luckily for Herbst, SHR’s Director of Competition Greg Zipadelli was there to see the good in Saturday’s run for him.

Zipadelli has watched the team battle adversity all season long despite having the speed to compete. That’s what made Saturday’s rebound performance an important step forward.

“It seems like they’ve had to battle a lot of adversity this year,” Zipadelli said. “Seems like nearly every week, something’s there. So good job by everybody today. Pit crew did a really good job; Riley did a great job. The car is torn up, so it’s not as good as it was or could have been. So I think he did a really good job of being patient with it and taking what he had and making the most of it.”

Perhaps more problematic for the No. 98 crew is that each bit of adversity has been different. No one situation has been similar for Herbst to learn from and adapt to next time.

“This is a tough place, so to go to the back and race your way back up there with a car torn up, it just shows he’s dedicated and just working hard,” Zipadelli said.

After Saturday’s race, the NASCAR Xfinity Series is off until Aug. 7, when the series hits Watkins Glen International. Unofficially, Herbst sits 13th in points, eight points behind Myatt Snider for the 12th and final spot in the Xfinity Series playoff grid.

Zipadelli wants the No. 98 team to focus on one thing during the two-week hiatus: clean up the small stuff.

“It’s the details,” he said. “We’ve just got to do a better job as a group with details, the little things and just not make those little mistakes and clean up some of the other stuff. I think it’s just kind of, look back to where we were for half the year. What can we learn from it and how do we get better?”

The Xfinity Series races at Watkins Glen on Aug. 7 at 4 p.m. ET, with television coverage from CNBC.