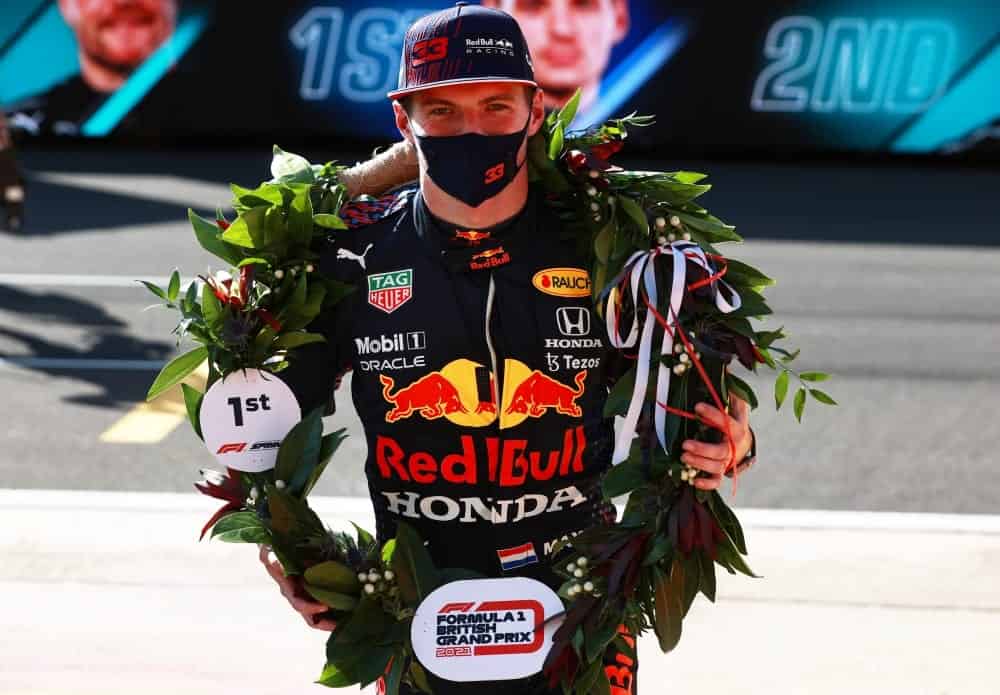 Formula 1 held its first-ever sprint qualifying today (July 17) which set the grid for the British Grand Prix tomorrow, and it was Max Verstappen who triumphed, swiping the lead from Lewis Hamilton into turn one and cruising to his fifth pole position this season and fourth in a row.

Hamilton and Verstappen have been closely matched all weekend. Verstappen initially had the edge, faster in free practice and ahead in Q1, but Hamilton responded by going quickest in Q2 by about three tenths of a second. In Q3, Hamilton took first position with a lap time of 1:26.134, ahead of Verstappen by less than two-tenths. Hamilton tried to extend his lead on his final run, going quickest in the first two sectors, but a massive snap of oversteer in the Vale chicane slowed him down. Still, Verstappen only improved by a tenth, giving Hamilton the top spot for Saturday’s sprint race. However, Hamilton bogged down at the sprint race start, with Verstappen taking the lead by the first corner and holding steady for the next 17 laps. Verstappen gained three points with Hamilton picking up two, and the title rivals will start on the front row for tomorrow’s Grand Prix.

“Around here it’s difficult to pass, but we had a good start and a good fight with Lewis in the first lap then we tried to do our own pace,” Verstappen said after the sprint. “But you could see we were pushing each other hard because at the end of the race the tyres were blistering a lot, so we had to manage that to the end.

“Nevertheless, happy to have scored three points. It sounds a bit funny to then hear you scored a pole position but anyway, we’ll take it. I think it will be a really exciting, exciting battle tomorrow.”

Although Valtteri Bottas wasn’t able to keep up with Hamilton and Verstappen, he did a solid job in Friday qualifying and started the sprint race third. Although the Mercedes driver opted for an aggressive strategy by starting on soft tires, he still couldn’t catch Verstappen and Hamilton and remained in third, collecting one point.

Charles Leclerc had looked rapid all day Friday, placing fourth in free practice before going third in Q1 and fifth in Q2. Early on in Q3 Leclerc was down in eighth, but a blistering lap put his Ferrari fourth. He retained this position throughout the sprint, unchallenged by the Red Bull and McLarens behind.

Sergio Perez’s weekend has not started well. He ended Q3 around six tenths adrift of Verstappen and behind Leclerc, before being passed by both McLarens and the Alpine of Fernando Alonso at the start. On lap 5, Perez spun exiting the Maggots-Becketts complex, losing grip in the wake of the cars ahead and just barely avoiding the barriers. He dropped down the grid and eventually retired, putting him last for the Grand Prix.

The McLaren duo of Lando Norris and Daniel Ricciardo had qualified next to each other on Friday, with Norris ahead of Ricciardo by just 0.002 of a second, and in the sprint race, both drivers got by Perez at the start. Later they each overtook Alonso, Norris executing a move under braking into Village and Ricciardo sliding one up the inside at The Loop. The McLaren drivers start Sunday’s race fifth and sixth.

Although Alonso finished Friday qualifying in 11th, eliminated in Q2 by a phenomenal lap from George Russell, Alonso had a stellar start, sneaking his way up to fifth place on the opening lap. However, his bold plan of starting on the soft tires slowly degraded, and he fell back to seventh, still a good improvement for Sunday’s Grand Prix. His Alpine teammate Esteban Ocon received a new chassis for this weekend after a series of difficult races and the freshly built car had helped him avoid another Q1 knockout. In the sprint, Ocon improved from 13th to 10th. Several hours after the sprint was over, Russell was hit with a penalty, allowing Ocon to begin ninth on the grid.

Lining up eighth for tomorrow’s race will be Sebastian Vettel. The Aston Martin driver had reached Q3 on Friday but had a lap time deleted for exceeding track limits, starting the sprint down in 10th. His teammate Lance Stroll did not look comfortable in qualifying, barely able to reach Q2. He started the sprint race in 15th and only improved by one position by the checkered flag.

The most impressive performance of the weekend so far has been George Russell. The Williams driver made it into Q2, putting in an absolute flyer of a lap to slot his Williams into seventh place for his second Q3 appearance in a row, eliciting a roar from the packed Silverstone grandstands. That performance alone would’ve been impressive, but in Q3 Russell found even more time, setting a lap time of 1:26.971, good for eighth on the grid for the sprint race. However, minor contact with Carlos Sainz set him back a bit, and Russell ended the sprint in ninth.

After the sprint race officials investigated the incident between Russell and Sainz and penalized the Williams driver three grid positions. He will now begin Sunday’s race 12th.

Sainz had not able to extract the same amount of pace from his Ferrari as his teammate Leclerc, starting the sprint in eighth. But on lap 1 Sainz tried to send a move around the outside of Brooklands, just barely getting tagged by Russell and relegating him to 18th. A strong drive followed, with Sainz charging back up to 11th for the Grand Prix tomorrow. After the penalty to Russell, Sainz will now start 10th.

Both Alpha Tauris looked off the pace in Great Britain. Pierre Gasly could only reach Q2 on Friday, starting the sprint in 12th and staying there by the 17-lap race’s conclusion. He’ll move up a position due to Russell’s infraction and lines up 11th. Yuki Tsunoda, meanwhile, was eliminated in Q3, finishing 16th after being eliminated by Stroll. He was also unable to improve in the sprint, and will start the Grand Prix in 16th.

Although Antonio Giovinazzi had been ahead in qualifying, Kimi Raikkonen looked sharper in the sprint. Giovinazzi had reached Q2 and started in 14th, but the Alfa Romeo slid back to 15th while his teammate Raikkonen jumped from 17th to 13th, putting himself in a good position for the Grand Prix.

While Russell was putting in blistering laps to advance to his second Q3 appearance, Latifi had been eliminated from qualifying in Q3 after finishing 18th. He was able to improve by one spot in the sprint race to 17th thanks to Perez’s misfortune. Both Haas cars also benefited from Perez’s off-track adventure. They had finished qualifying at the back of the field, with Mick Schumacher down in 19th and Nikita Mazepin in 20th, but will start the Grand Prix in 18th and 19th, respectively.

SkySports broadcasters made such a big deal about what to call this Sprint. Croft and Kravich are very annoying.
I think this Sprint race is a good idea for the fans. More action, less time.