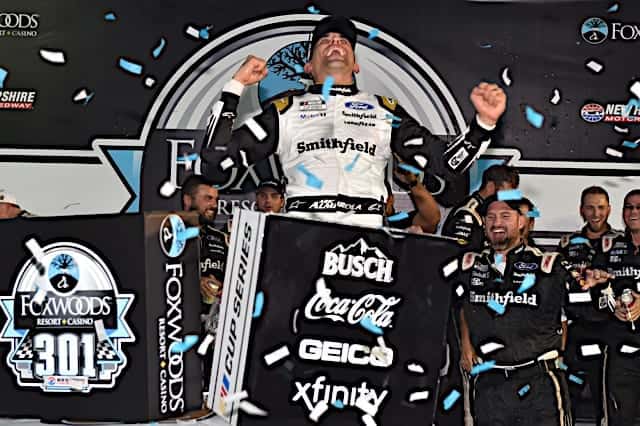 A relatively tame race followed the complete and utter mayhem that started the afternoon at New Hampshire Motor Speedway. The NASCAR Cup Series took to the Granite State oval on Sunday (July 18) and was almost immediately besieged by rain, which sent several cars spinning and brought out a red flag that lasted more than an hour and a half.

It was Stewart-Haas Racing’s Aric Almirola, though, who found himself in victory lane when the rain cleared and darkness set in. Almirola powered past Ryan Blaney late in the running, was passed by Brad Keselowski on pit stops and grabbed the lead back, securing his first win since 2018 and first of the year.

“Honestly, I did [see that performance coming],” Almirola said in his post-race interview. “This is by far one of my favorite racetracks. I love coming up to the New England area and racing, I love this racetrack. I had this race won a couple years ago and I gave it away, I lost it. I am so glad to win a race here with this race team.

“We’ve been through so much and I’ve just stood the test and kept the faith,” he added. “The team [has] been working so hard. […] There’s been so many people that have continued to support us through, like, the crappiest year ever, and this feels so good for them. My pit crew did a phenomenal job on pit road, and all the guys that work on this car, they just keep fighting, they just keep digging, bringing the best race car they can bring every week. And it is no doubt, we have struggled, but guess what? We’re going playoff racing.”

Just five laps into the race, mist set in and coated the track, which sent Kyle Busch, Martin Truex Jr. and Denny Hamlin spinning. Of the three Joe Gibbs Racing cars, the No. 18 was the only one to suffer race-ending damage: Busch’s disdain for NASCAR’s actions led him to tap the pace car’s rear bumper on a caution lap and flip the bird out of his window as he drove by the flag stand.

Truex basically spun in tandem with Busch and received some damage that required extensive repairs, while Hamlin was the only one of the three to avoid any major contact.

The rain eventually stopped and, after a one-hour, 41-minute stoppage that featured extracurricular activities like Bubba Wallace, Corey LaJoie and New England Patriots wide receiver Gunner Olzewski tossing a football amongst themselves and to fans, drivers were called to their cars and engines were finally fired. Joey Logano‘s team did some minor tinkering with the car under caution, leading NASCAR to penalize the team two laps.

You can't work on your car under a red flag, and Joey Logano's team was penalized two laps for this. #NASCAR pic.twitter.com/ErAV1YC0uA

BACK UNDERWAY at @NHMS!

Retweet if you're watching some @NASCAR. Stream here: https://t.co/wKDI0aNMYn pic.twitter.com/LpGoIdFDhg

A caution flew for Anthony Alfredo‘s spin, but the rest of stage one went caution-free. Chase Elliott had been out front since the race resumed, but a charging Ryan Blaney hunted him down and passed him on lap 62. Blaney’s Team Penske stablemate and last year’s New Hampshire winner Brad Keselowski followed suit in passing Elliott, but the No. 12 cruised to the stage victory.

A gun issue on pit stops dropped Blaney from the lead, so Kevin Harvick and Hamlin guided the field back to the green flag. Hamlin spun the tires on the restart, allowing Harvick to escape and hold the top spot.

Right around the halfway point of stage two, a caution came out for Quin Houff‘s No. 00 going around. It was a spin that came with a bit of help from Ryan Newman.

Daniel Suarez and Bubba Wallace get together, and Chris Buescher has nowhere to go. #NASCAR // NBCSN pic.twitter.com/lQjkAslzVx

Once the smoke cleared in stage two, Keselowski led the last chunk and won the stage by about a second over Harvick.

Stage three mostly ran under the threat of a 10-lap warning from NASCAR, in place for when darkness began setting in. This led to an all-out battle between Blaney and Keselowski, the latter of whom got Blaney loose, bumped him and ran side-by-side with his teammate for laps on end. Blaney held the lead, though, as Harvick began to close in on the pair.

Sunset was scheduled for around 8:20 p.m. ET, but things were beginning to get dark an hour ahead of that. Aric Almirola, running in the top 10, started moving forward, picking off car after car, and then engaged with Blaney for a number of circuits as they battled. Almirola prevailed, taking the lead and pulling away.

On pit stops, Keselowski cycled back in front of the No. 10, but it didn’t take Almirola long to chase him back down. They still ran second and third, though, because Matt DiBenedetto elected to stay out as long as possible and bank on the race ending due to darkness. The No. 21 eventually pitted, though, and the race ran to completion. Almirola cruised to the victory, his first of the season and first since Talladega in the fall of 2018.

'@Aric_Almirola came into this race 27th in points.

That doesn't matter anymore. A win, and he's now in the #NASCAR Playoffs. pic.twitter.com/dgujTax7zU

“That’s what a racecar driver lives for,” Almirola said of the waning laps of the race. “For so long, I’ve been so close to winning at some of these racetracks like here, Dover, and I’ve let it slip away. I’ve honestly hated it, and my wife has hated it worse than I have. She’s always told me, she’s like ‘Honey, I want you to win so badly at somewhere other than a restrictor-plate racetrack,’ and we did it today.

“[…] We’ve been fighting, scratching, clawing, and man, this feels so good to have something pay off for all the hard work. Just really happy. Man, this means so much. It’s hard to explain it.”

Christopher Bell, who won Saturday (July 17) afternoon’s Xfinity Series race at the track, came home second and couldn’t mount a charge late despite being within a second of Almirola in the closing laps. Keselowski, Logano and Blaney rounded out the top five, while Harvick, Kyle Larson, Ross Chastain, Alex Bowman and Hamlin completed the top 10.

The Cup Series has two weeks off and will make their return on Saturday, Aug. 8 with a date at Watkins Glen International.

Awesome, Almirola in…. Dillon out. Today’s race showed everything good and everything bad about win and you’re in.
With the exception of the first 20 laps, I thought as New Hampshire races go, this was one of the better ones. Lots of racing for position and for the lead despite a lack of wrecks and restarts.

3 pm start time Nascar. I was hoping NBC would learn what FOX was doing wrong. Maybe it is Nascar !

I’m glad Aric won, toss maybe a Reddick and Bell win in there and really mix it up.

Bell has already won and, for the moment, Reddick is the last seed in on points. I have been wanting to see Reddick win since last year. Wouldn’t mind seeing Suarez win either.

I found it amusing that it looked like the 18, 19 and 11 were the only cars to spin out in the wet. I’m not sure what to make of it but I’m sure there were a lot of fans who stopped watching when Baby Busch packed it in. I was heartbroken (dripping with sarcasm),