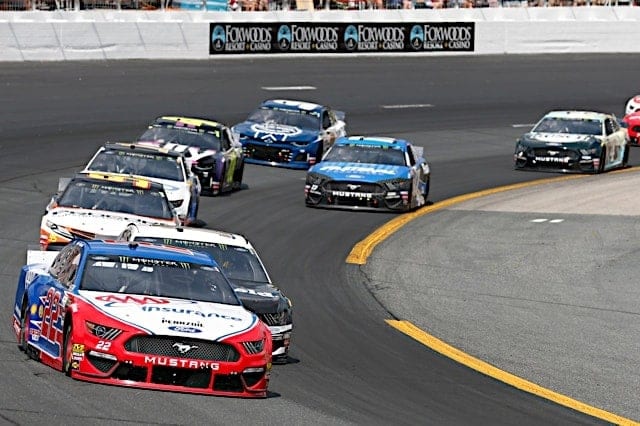 A northeast venture to the Granite State concludes the pre-Olympic break portion of the NASCAR Cup Series’ 2021 season. New Hampshire Motor Speedway hosts this afternoon’s Foxwoods Resort Casino 301 and it is the final NASCAR event prior to the opening ceremonies of the postponed 2020 Tokyo Summer Olympics getting underway later this week, coverage of which puts racing on hold for a few weeks.

But before United States stars like Alex Morgan, Simone Biles, Kevin Durant and a host of others represent the country in the one-year-in-the-making Tokyo Games, the U.S. will hold one more NASCAR Cup Series race, led to green by another face of their respective sport in Kyle Busch.

Busch finished an evidently frustrating second to brother Kurt Busch last week at Atlanta, but the No. 18 will line up alongside Joe Gibbs Racing teammate Martin Truex Jr. on the front row. They’ll be followed by Chase Elliott, fresh off a win in the SRX finale Saturday (July 17) night, as well as the elder Busch brother and Alex Bowman to complete the top five.

Ryan Preece, Corey LaJoie, B.J. McLeod and Quin Houff will all start at the rear for failing inspection twice. Bubba Wallace will also start from the back after unapproved adjustments were made to the No. 23.

Preece LaJoie McLeod Houff to the rear for 2x failure. They are working to pass on third time by.

A number of drivers have reason to be comfortable with the track: seven such pilots have at least two wins in Cup competition at Loudon. Kevin Harvick leads all comers with four, while both Busch brothers, alongside Hamlin and Ryan Newman, have three apiece. Brad Keselowski and Joey Logano each have a pair of triumphs there, Keselowski the most recent of any driver with a 2020 win.

Bell should have some confidence, too: he won Saturday afternoon’s Xfinity Series race at New Hampshire in flat-out dominating fashion, leading 151 of the 200 laps and beating second-place Justin Allgaier by more than six seconds.

The Oklahoma native hadn’t been in an Xfinity Series car in a year and a half yet scored his third victory in three tries at the track. He has finished in the top two in all five of his races across NASCAR’s two lower series, four of those results landing him in victory lane.

Elsewhere, Daniel Dye secured his first ARCA victory with a triumph at Berlin.

Across the pond, the Silverstone Circuit hosted a sprint qualifying race on Saturday, the first of three this year, where the entire Formula 1 field took to the track for 17 laps ahead of the main event. Max Verstappen won the race ahead of British native Lewis Hamilton, securing the pole for the Grand Prix.

Contact between the pair on the first lap of Sunday’s British Grand Prix sent Verstappen hurtling into the tire barriers and out of the race. Hamilton was hit with a 10-second time penalty but prevailed, passing Charles Leclerc in the closing laps to win. Verstappen was transported to a hospital but was reportedly okay despite suffering a 51G impact.

Tune in to the last Cup Series race for a few weeks at 3 p.m. ET on NBC Sports Network.

It was nice not to hear Rick Allen screaming who has taken the checkers.