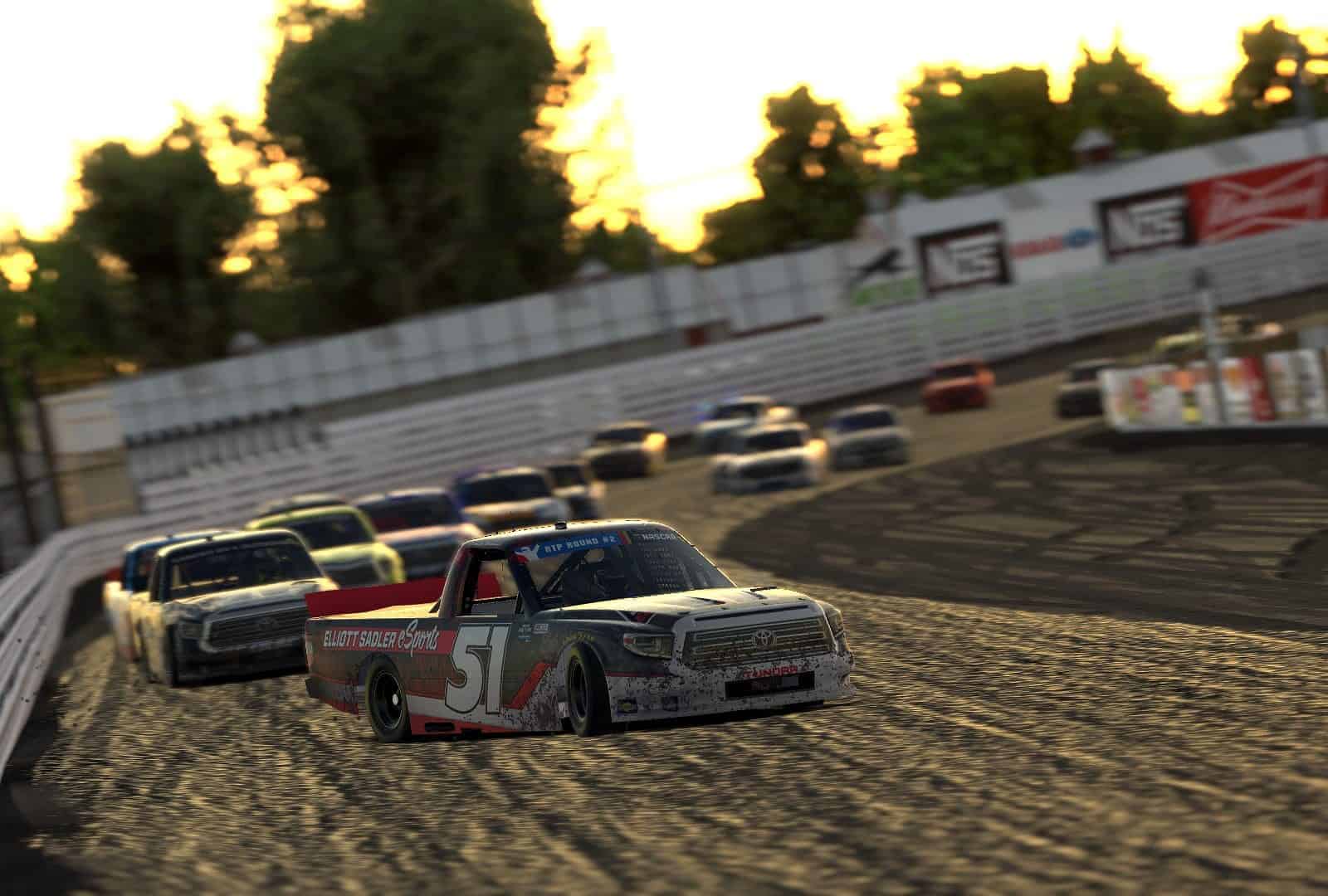 This week’s iRacing roundup has two weeks of simulated racing to cover since our last one went live. All of our community leagues haven’t taken off since then, plus the eNASCAR iRacing Road to Pro Series returns with round 2 of the qualifying portion of the schedule.

Many of our communities are either in playoff mode officially or are just about to get there. 100% Cup Series and FTF Cup Series both only have five races until their respective playoffs begin while Monday Night Racing wrapped up their regular season two weeks ago.

The third road race of the season saw Jon Dulaney even the scorecard once again in the win column. Bryson Hixenbaugh has led the standings for a while now, but with only five wins. Adam Benefiel is a few spots behind, but he also had five wins entering Road America. After Road America, Dulaney could also say he had five wins on the season.

Between the three drivers at this point, 15 of the 20 races saw one of their names in victory lane. Dulaney was able to accomplish this at Road America after a battle all night with Robert Miller. Miller led just about half the race at 29 laps. Dulaney had the most laps led at 33.

Dulaney strikes again at another road course taking the win at @roadamerica in the 100% Cup Series!!! The 9 car continues to dominate with right turns. pic.twitter.com/4Q4fbHUKLV

A week after Jon Dulaney tied it up at five wins among three drivers, Adam Benefiel went out and decided to take the lead solely at six.

In the 260 lap event, Benefiel led 104 laps, splitting leading duties with Bryson Hixenbaugh, Jon Dulaney, Cameron Stone, Kevin Steele, Robert Miller and a few others who led a couple here and there. In total, there were 25 lead changes among nine drivers, but it was Benefiel who wound up on top.

BIG NUMBER SIX FOR @Adam_Benefiel83! Had to do it the hard way but got it done. #iRacing #SimRacing #leagueracing #nascar #enascar pic.twitter.com/GJ7dWvF8Z1

With five races to go in the regular season, Hixenbaugh, Dulaney and Benefiel have separated themselves from the rest of the field. Stone is consistent and sits in third, but with only one win, he may need to find a few more before the end of the year to be in the same league as the other three.

With the playoffs starting to take shape after drivers have come and gone, Road America proved to serve no consequence to the current grid. Early on, it seemed like Blake Reynolds was finally on his way to his first career FTF Cup Series victory. From the pole, Reynolds led the first half of the race and held the lead on the restart following the second stage.

Unfortunately, Reynolds got a tap into the first corner and was involved in a fairly large amount of dust ups from there on out, his engine expiring a few laps later. That handed the lead over to Logan Helton, but Helton eventually gave way to Oumar Diallo. Diallo made the right calls at the end to hold on for his first career FTF victory, but due to his number of starts, it doesn’t lock him into the playoffs.

Congratulations to @O_Diallo23 on the win at Road America! pic.twitter.com/FLYzWFLldG

Instead of a second Atlanta race, FTF wound up taking its talents to Rockingham Speedway for race 21 on the season. Jonathan Oates started from the pole, but spun on an early restart and end his and others races early.

Brian Mercurio had yet to win in 2021 in the Cup Series. He’d taken multiple GNS wins so far and led the Cup points, but until Rockingham, the Cup win had eluded him. That changed last week as he was able to dominate the night, leading 161 of the 197 laps, scoring a perfect score after winning both stages en route to his first win of the season.

Now only five races remain until the 2021 playoffs. Derek Justis stopped racing a few weeks ago but had gained enough points to be the last driver in as it stands. It is expected that Alex Kolonics or Evan Rice will pass him after New Hampshire for that final spot.

The final race of the Season 3 regular season pinned friends and colleagues against one another for the final spots in the Monday Night Racing Playoffs.

The Chicagoland Speedway finale saw the NASCAR Xfinity Series cars on the currently defunct facility in Joliet, IL. A long green flag run at the end of the race set the tone for the finish. Pit strategies were scattered, but Rajah Caruth played the right card. Caruth held off Garrett Smithley and Ryan Vargas for the win and the coveted final playoff spot.

Caruth joins the field of 13 that will fight for the Season 3 title. Those drivers include:

Smithley, TJ Majors and Gary Sexton all just missed the playoffs by less than two points. Will Rodgers was also unsuccessful in his attempt to defend his Season 2 title, which guarantees a new champion in Season 3.

FINAL LAPS: @rajahcaruth_ shakes up the playoff grid with dominating win at @ChicagolndSpdwy as other drivers try to race their way into the #MNRplayoffs in wild ending for the #KSDT150. @iRacing | @KSDTCPA pic.twitter.com/eVbeWS5Zfm

A “for fun” event with money on the line, Monday Night Racing’s All-Star Race brought iRacing Radicals to Texas Motor Speedway for a different type of superspeedway race.

Brad Perez was the big winner when it was over after multiple incidents on the last lap. Perez held off David Schildhouse and Preston Pardus to claim the victory and $200 prize.

Dueling splits set the stage for the top 70 drivers in the second round of the eNASCAR iRacing Road to Pro Series. The first challenge up was a dirt race at Knoxville Raceway. The splits were set as evenly as possible based on iRating, with the “top” split on Podium’s main channel and the other on Podium 2.

In the one on the main broadcast, Cody Byus started on the pole and led early and often. After multiple cautions, Donovan Strauss was able to get by Byus on a restart with 21 laps to go. After multiple overtime attempts, Strauss held on for the victory.

He's on a roll after taking his third checkered flag of the Road To Pro @iRacing series!

The second split saw one driver dominate, leading every single lap. Austin J Yarbrough took the pole position and blew the doors off the rest of the field. Although at the end he had a late battle with Parker Retzlaff and Daniel E Eberhardt, Yarbrough held strong and led through the overtime attempt for the win.

Yarbrough takes the checkered flag after leading the entire race!

Only the top 20 will move onto the Contender Round, so as of now, that’s the top 10 finishers in each race. Next up, it’s Homestead-Miami Speedway on July 23.

100% Cup Series will head to New Hampshire Motor Speedway on Saturday night at 8:30 p.m. ET. The replay will be available on 3 Wide TV.

FTF Racing will also be racing at New Hampshire on Sunday, live at 8:00 p.m. ET on BottomSplit.